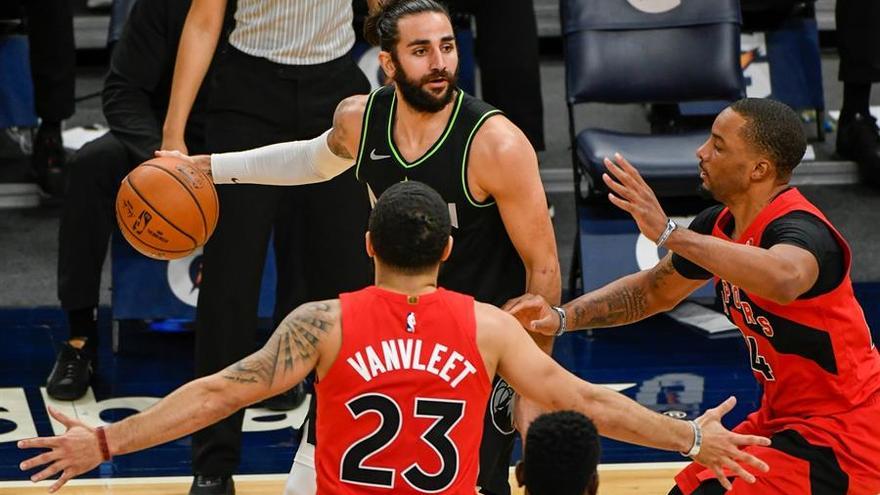 The Toronto Raptors beat the Timberwolves 81-86 on the road in a bad game for the Minnesota team that culminated in a 0-11 run for the Canadian team in the last three minutes of the game that sentenced Ricky Rubio’s team for the third consecutive loss.

The top scorer of the game was Raptors forward Normal Powell, with 31 points, 6 rebounds and 2 assists, while point guard Fred VanVleet had 12 points, 7 rebounds and 3 assists.

The Raptors arrived at the Target Center in Minneapolis after winning two important games against the Milwaukee Bucks, one of the three strongest teams in the Eastern Conference. And on Thursday, without point guard Kyle Lowry, one of the most fundamental men on the Canadian team.

For its part, the Timberwolves are sunk in last place in the Western Conference, and until this Friday’s match they accumulated 22 defeats and only 7 victories. And the last two games were two losses to the Lakers and the Pacers.

The only thing the Wolves had going for them was that Lowry is still out and that last Sunday the Minnesotans, with the worst defense in the entire NBA, beat the Raptors at their temporary home in Tampa by 112-116.

The game started badly for Rubio’s team and also Spanish Juancho Hernangómez. In the first two minutes, the Raptors scored 7 points while the Timberwolves trailed 0. Nothing was going well for the NBA’s youngest team. Neither center Karl-Anthony Towns (KAT), the team’s star, nor Anthony Edwards, the No. 1 in the 2020 draft, nor Rubio were able to score.

The Wolves’ first two points had to be raised to the marker by Rubio from the free throw line. And although the Minnesotans got a little closer on the scoreboard, it was clear that the team was not working and the defense was a drain. At the end of the first quarter, the Raptors were ahead with 13 points, 15-28.

In the second quarter, the Wolves came into play a bit more. Malik Beasly, whose points have been essential to the team, started making baskets. Rubio’s percentage also improved. Most of all, the defense began to put pressure on Pascal Siakam and DeAndre ‘Bembry, two of Toronto’s most effective players.

Minnesota’s defensive efforts paid off and the Raptors only managed to score 17 points in the second quarter, 14 of them by Norman Powell, who made 3 of the 6 triples he tried in the period. Meanwhile, the Wolves scored 20 points despite Minneapolis players like KAT who normally have high ERA making shots that didn’t even touch the rim.

The break was reached with a 35-45 in favor of the Raptors, 10 points that seemed little in view of the bad game of the Minneapolis.

After the break, the game looked like it would be sentenced by the Raptors in the third quarter. Fred VanVleet, who had had a low-key night up to that point, started carburing and pushed the Toronto to get ahead 16 points (41-57) in four minutes after the restart.

But after a timeout requested by Ryan Saunders, the Wolves coach, the Minnesotans suddenly changed the chip. With Edwards and Jarred Vanderbilt on the bench, the Minneapolis team endorsed the Toronto team. a 15-0 run and tied the game 57-57 with 2 minutes remaining in the third quarter.

The quarter concluded with a statement from Edwards: with 10 seconds remaining in the third quarter, the rookie accelerated from the baseline ready to close with a dunk. It was no use that Yuta Watanabe tried to block his way. Edwards screwed the ball into the hoop and incidentally buried the Toronto forward who all he could get against the force of Minnesota was to take a personal one.

When the period ended, the scoreboard was 64-58 in favor of the Timberwolves thanks to points from players like Jake Layman or Jordan Mclaughlin who normally do not have minutes.

The Wolves were able to control the Raptors for much of the final 12 minutes of the game. But in the last 3 minutes, the team suffered another blow and were unable to score a single point while the Raptors made 11, which left the final score at 81-86 for Toronto.

Rahm: “I keep a journal because I take mental work very seriously”

Brazil beats Mexico on penalties and waits in the final

Rafa Nadal: “My body decided for me not to go to the Games”