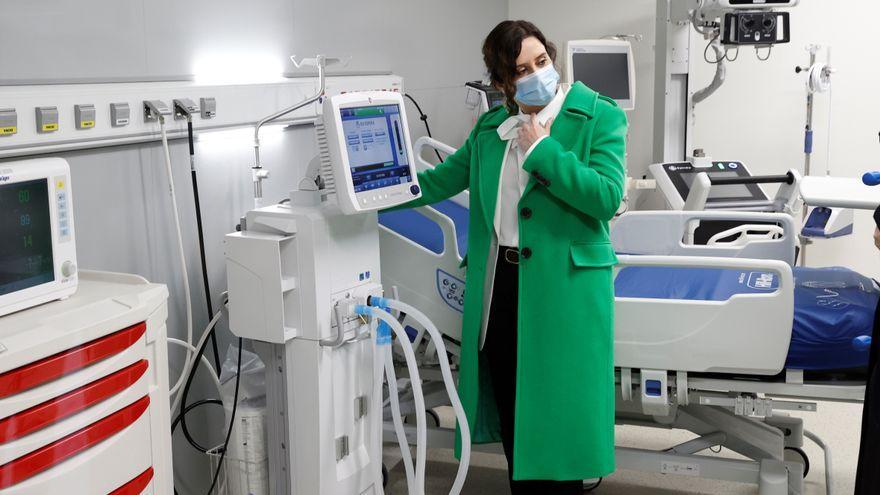 The Community of Madrid will award more points in future selection processes to health workers who have worked at the Nurse Isabel Zendal emergency hospital. This is stated in a resolution of human resources of the Ministry of Health, dated January 28. In this way, the regional government of Isabel Díaz Ayuso tries to attract new health personnel to the new pandemic hospital, which has encountered resistance from professionals since its inception to be forcibly transferred to work at the new center.

It is not the first time that the Madrid Executive has done something similar. The Ministry of Health sent a communication to all hospitals in the region on January 5 so that they do not hire any health worker to reinforce the COVID who would have given up being referred to the new center.

“With the aim of encouraging these trips and as a measure of recognition for these professionals, it has been considered convenient, given their status as temporary staff, to adopt an exceptional measure that rewards with an additional score to that set in the temporary employment exchanges, the services that these professionals provide in 2021 at the Nurse Isabel Zendal Emergency Hospital “.

The controversial hospital, which, according to the Madrid president, was going to “amaze the world”, has found even before its inauguration great difficulties to equip itself with staff due to the refusal of most of the health personnel in the region to be transferred to the pandemic hospital . The regional president refused to hire new professionals for the infrastructure that accumulates cost overruns of twice what was budgeted: it has cost more than 100 million euros to which would have to be added as many in security and maintenance.

The hospital that the Madrid government exhibits as an achievement of its management capacity, being built in half a year, was built without taking into account the staff it needs and the president herself has always tried to clear up the questions about where they were going to come from health professionals to work in a center that, due to its size, would require 6,000 workers, according to the estimates of the unions, if one day the 1,000 scheduled beds were opened.

The formula chosen by the Ministry of Health involves relocating professionals from other centers despite the fact that many are already saturated by the extraordinary needs to face the pandemic. The regional government has appealed to the Resident Internal Physicians (MIR) –Medicals who have not yet finished their specialty– to make up for the lack of toilets at the Nurse Isabel Zendal hospital.

As specified in the resolution dated January 28, “on an exceptional basis and as a measure of recognition”, professionals who provide services during the year 2021 at the Hospital de Emergencias Enfermera Isabel Zendal, in addition to the score that per month of services provided have recognized in the corresponding temporary employment exchanges, “they will be awarded an additional score in the section of services provided in the same category of 0.30 more points per month worked in the referred Hospital”.

The letter states that on January 22, 2021 and in writing, the five trade union organizations present at the Sectorial Board of Health, “jointly proposed to this Directorate General, among other measures, the recognition with additional points in the temporary employment pool for services provided at the Nurse Isabel Zendal Emergency Hospital “, something that the unions deny.

AMYTS, CC.OO, UGT, Csit and Satse have issued a statement against the resolution: “This statement is a falsehood from beginning to end that does not correspond at all to the negotiations carried out on the aforementioned dates,” they regret .

The regional government has encountered many resistance from the health personnel of the Community of Madrid to be transferred to the new center that was built in record time, which does not have operating rooms and lacks the basic infrastructure that the network of hospitals in Madrid does have. the region. The Madrid president declared a few weeks before her inauguration on December 1 that “any toilet would be delighted to work at the Zendal”, but reality has not proved her right.

When the Ministry of Health launched in November a process for professionals to sign up on a voluntary basis, it only managed to get 106 to do so. Faced with the failure of the call, the regional government announced then that it would make forced transfers pulling the reinforcement personnel hired by COVID. Last week there were already more than a thousand health workers working in the center, the vast majority – 90% – without having chosen it. With infections soaring in the region and hospitals on the verge of collapse both in the plant and in the ICUs, Zendal has already opened most of its beds.