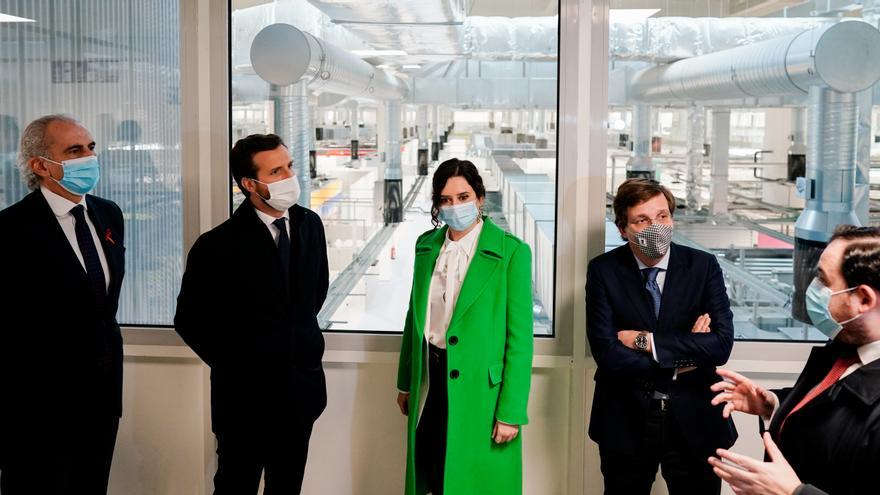 An opening behind closed doors for an unfinished hospital, without toilets or patients. Thus began the most anticipated day of Isabel Díaz Ayuso since she is president of the Community of Madrid. Ayuso inaugurated the pandemic hospital, his star measure to combat Covid-19, a month late, and the leader of the PP arrived in Valdebebas ready to make “history.” A launch for which he summoned hundreds of journalists who he left crowded at the gates guarded by a security cordon. Only one Telemadrid cameraman accompanied Díaz Ayso during his tour surrounded by politicians and authorities. “The president was radiant,” one of them summed up to his interlocutor on the other side of the phone. For the posterity of the Madrid public television archive, Ayuso’s inability to answer whether the brand new hospital – his personal commitment – has operating rooms to deal with catastrophes such as a plane crash will remain after a question from his party partner, Pablo Married. The answer: there are no operating rooms.

Ayuso used a historical simile to emphasize that this December 1 was an important day: “Yesterday it was 217 years since the Balmis Expedition launched into the sea towards America, a story full of parallels with ours today.” And he added: “That expedition is part of our history and hopefully this hospital too.”

In that Balmis expedition, to bring the smallpox vaccine to America and the Philippines, was Isabel Zendal, the nurse who today gives its name to the new hospital. “Isabel Zendal, 200 years later, will once again take care of and heal the people who need it most,” said the president as a way to pay tribute to the health workers who thanked “giving his life” for others. Ayuso wanted to ignore, however, the two hundred health professionals were demonstrating a few meters from the building with banners calling for their resignation, annoyed that a staff that is exhausted and tired is not going to be reinforced.

“Fewer hospitals and more professionals,” shouted the professionals summoned by the main health unions, at the same time that they advocated protecting public health. The congregation reproached the waste for an infrastructure – more than 100 million euros – that will not have an increase in staff. “A large public hospital cannot be bad news for anyone unless the political sectarianism sees it that way,” Ayuso responded to the criticism, who also brought together a handful of residents of the area to support her.

The Minister of Health, Enrique Ruiz Escudero, later confirmed that there will be no new hires and that the professionals will leave the rest of the hospitals in the network, something that although he has repeated for weeks it is still difficult to believe the professionals of the Madrid health network. Escudero said, however, that the new infrastructure will serve to relieve the rest of the centers, without explaining how this is done if the decrease in patients will be accompanied by fewer toilets. The workforce will begin to arrive at the new infrastructure in the coming days, Escudero announced. “Next week, he will receive his first patients,” he added. He did not say how many health workers or patients, although he detailed that they will be referred from the Emergency Department of the rest of the hospitals.

Precisely Ifema, the makeshift field hospital that became the center of the propaganda with which the president of the Community of Madrid sought to cover the black holes of her administration when the pandemic hit harder in spring, was very present during the opening. “First we did it with Ifema and now we do it with this permanent hospital that will also surprise the world,” Ayuso said to emphasize that this is “a hospital for Spain” and a pioneer since it is “located next to an international airport”, without anyone I have just understood what the president of Madrid means by that.

One of the hypotheses is the determination of the popular leader to store the Covid vaccine in the hospital, as offered a few weeks ago from the regional parliament platform. However, during her guided visit by the general director of infrastructure, Alejo Miranda, the Madrid president asked if there were “cold rooms” for this purpose. “It would be very close to an airport to store the vaccine,” Ayuso reflected. The Madrid president also thought loudly that it could be used for a possible plane crash, which led the president of the PP, Pablo Casado, to ask if there were operating rooms. Ayuso was left blank but Miranda replied: “There are procedure rooms, which we now call a priest room.”

The general director of Infrastructures of the Ministry of Health assured later in his joint press conference with the Minister of Health that the works “have concluded”. The reality if you walk around is that the workers and operators are still part of the landscape. A few meters from the main entrance, dozens of them continue to work. “There are still some auctions left,” one of the workers told elDiario.es without wanting to specify which ones, while acknowledging that they have been reprimanded for speaking to the press.

The workers, however, were not invited to the inauguration. Others who were did not want to attend. The Minister of Health, Salvador Illa, declined the invitation and the spokesmen for the opposition of PSOE, Más Madrid and Unidas Podemos-IU have not attended either. Those who have wanted to accompany Ayuso have been the Secretary of State for Health, Silvia Calzón, the president of the Assembly, Juan Trinidad, the mayor of Madrid, José Luis Martínez-Almeida, and the president of the PP, Pablo Casado, in addition to Vox spokeswoman, Rocío Monasterio, and there was no opposition party present in the Assembly. The Minister of Health, Salvador Illa, declined the invitation he received from Díaz Ayuso.

Nurse Isabel Zendal opens this Tuesday a month late – it was announced for October 31 – and with unfinished facilities. Only one of the three pavilion will open: the Madrid president promised a 1,000-bed hospital in June but for the moment only 240 will be opened.

Perhaps one day – as predicted by the general secretary of the PP Teodoro García Egea – the new emergency hospital that the president of the Community of Madrid has inaugurated this Tuesday – unfinished, without health workers or patients – will end up being called Isabel Díaz Ayuso. What remained latent on December 1, 2020 is that the PP leader has arrived in Valdebebas ready to make “history.”