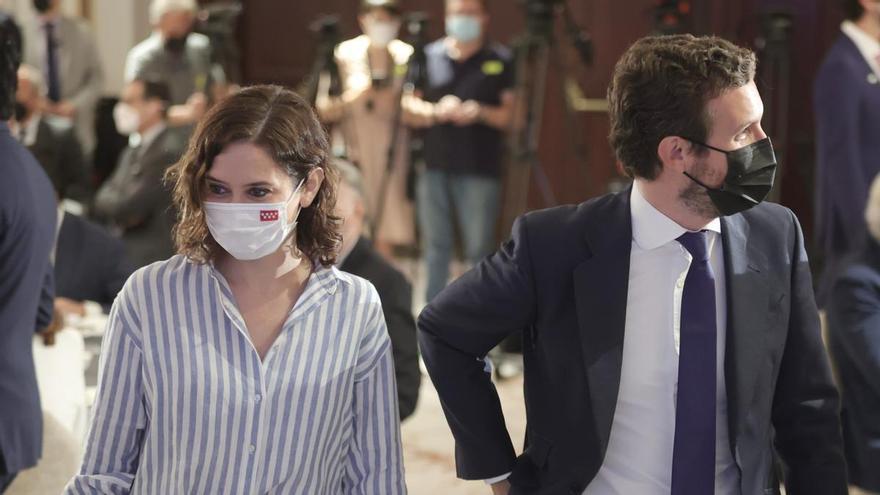 The president of the Popular Party, Pablo Casado, met this Friday with the Madrid president Isabel Díaz Ayuso, in a meeting that was held in the afternoon at the party's headquarters on Génova street. The meeting took place a few hours after Casado estimated at 286,000 euros that Tomás Ayuso, the brother of the head of the regional Executive, charged for "receiving masks" and that he raised, "beyond the fact that it is illegal", if it is "It is understandable that on April 1, 2020, when 700 people died in Spain, they can be contracted with your sister and receive 300,000 euros for selling masks".

Although the content of the meeting held this Friday in Genoa has not been disclosed, from the PP they transfer that the party "regrets the events of recent days and will continue to defend, together with all the militants, the best future project for Spain."

The objective of the meeting, which was not communicated until this Saturday, was to address the internal crisis that threatens to blow up the match, after learning that Ayuso's brother charged a commission for a contract of 1.5 million euros for the purchase of masks , for an emergency procedure due to the pandemic, in a finger award that elDiario.es revealed. The president of Madrid, involved these days in clarifying these payments, has justified that it was an amount of 58,850 euros "for the steps taken to obtain the material" and, although she admits that there are three other payments from the company Priviet Sportive to Tomás AyusoHe refuses to detail them.

Casado, for his part, has downplayed the fact that the award of this contract and the payment to the president's brother is legal and focused yesterday on the exemplary field. "I would not allow my brother to charge 300,000 euros for a contract decided in the council of ministers," said the opposition leader in an interview at Cope, in which he justified an internal investigation of Ayuso to find out if there was "trafficking of influences" in the award of that contract and suspecting that Daniel Alcázar, the family friend who took the contract, may have acted as a "figurehead" for Tomás Ayuso.

"It is necessary that there be previous processes before the Justice acts so that any official can act and avoid a case of corruption," Casado said on Friday. The day before her, Ayuso had accused him of persecuting her "cruelly" for wanting to preside over the Madrid PP.

This Friday's meeting between Casado and Ayuso takes place while deputies and other members of the party begin to position themselves on one side or the other and one day after Secretary General Teodoro García Egea announced the opening of a file with the regional president. For the time being, the president has the explicit support of the deputies Cayetana Álvarez de Toledo and Pilar Marcos Domínguez and the former regional president Esperanza Aguirre, who has called for García Egea's resignation this Saturday and is "thinking" whether to also claim the of Married.

As for the Conservative party barons, most of them have chosen to position themselves in favor of the party boss. The Andalusian president Juan Manuel Moreno Bonilla has called for "unity" and the acting president of Castilla y León, Alfonso Fernández Mañueco, who less than a week ago was submitting to the polls, has demanded that the truth prevail. The president of the Xunta de Galicia, Alberto Núñez Feijóo, on whom some eyes are set in the PP, has defended Ayuso and has advocated that the problems be resolved "in an intelligent way, not causing a fire."