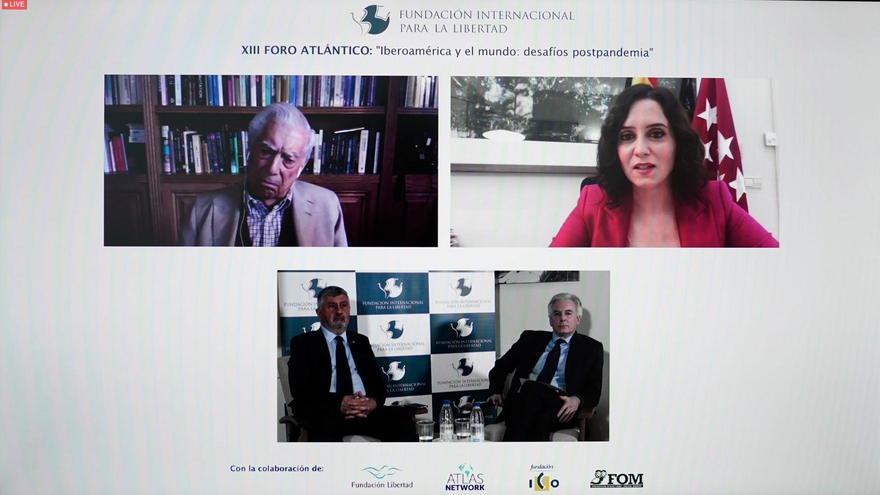 The president of the Community of Madrid, Isabel Díaz Ayuso, described this Monday as a “totalitarian regime” to the Government of Pedro Sánchez. The leader of the PP has done so during a videoconference in an Ibero-American forum to discuss the “challenges of the post-pandemic” of the International Foundation for Freedom, which has among its founders the writer and Nobel Prize for literature Mario Vargas Llosa or the former president of the Government, José María Aznar.

Ayuso has taken advantage of this forum in which the former leader of Citizens Albert Rivera has also participated to charge against the Executive of the PSOE and United We can coalition and become the “uncomfortable counterweight to totalitarianism.” “We have to organize the liberal democracies”, said the popular leader in the videoconference that also had international politicians on the poster.

The Madrid president has defended that the Sánchez government is taking advantage of the pandemic to impose a “totalitarian roadmap.” “Totalitarian regimes always take advantage of a catastrophe, a supervening situation, where citizens are occupied by other issues, such as their property or the future of their children, to impose that totalitarian roadmap even more through fear. And it is now same in what we are “, has ensured.

Ayuso has once again brought up the fiscal harmonization between autonomous communities that the central government wants to approve. The popular leader has assured that it is “unfair to have to defend the tax system in Madrid”, which she has described as an “excessive attack of madrileñophobia, at a time of so much pain.” “Everyone who knows Madrid knows the conditions in which we live here of openness, freedom, respect and legal security, which is what companies are looking for”, he defended.

“We are not going to stop denouncing at any time the nationalist abuse, the business it entails, the ruin it has caused. * We are not going to delve into the regionalist discourse, Madrid is Spain above all else, we are at the service of Spain and we are going to denounce all fiscal, health, economic and educational abuse, “insisted the Madrid president.