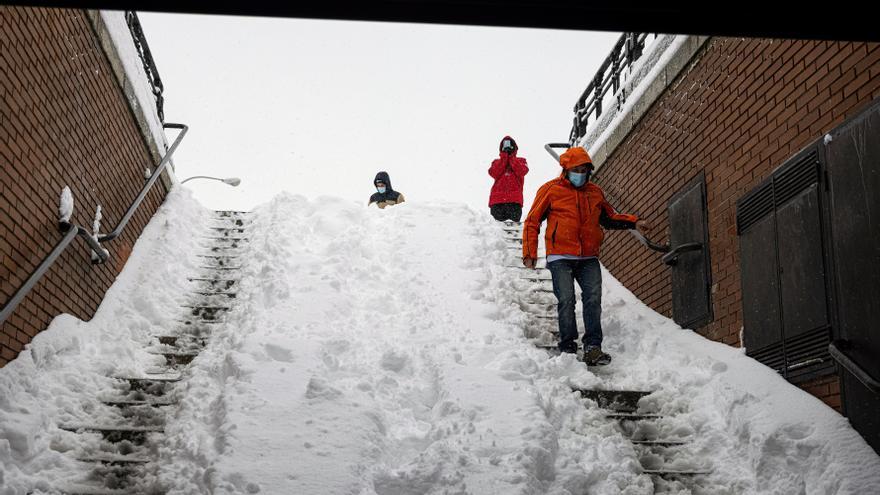 “We are seeing images of ball fights, of people skiing … and what we want to ask all those people and all citizens to have the strength, to be well, to help us remove as much snow as possible. We have some crucial hours until tomorrow at noon “, the Madrid leader has transferred, in an interview on ‘Antena 3’, collected by Europa Press.

Ayuso has emphasized that all the snow that is removed on ramps, awnings or on balconies is “right now buying time from time.” In addition, he has asked for caution during the next few hours because, for example, there are stalactites on the streetlights or branches are falling from the trees. “We need each other. We do not have an excessive snow culture, especially in the center of the Peninsula and we all have to pitch in,” he said.

The head of the regional Executive has acknowledged that all administrations have been “exceeded in a moment” because despite the predictions that they were going to have snow levels, in the end the result has been “in triplicate.” Thus, it has affected that work is being done to “soon regain a certain normality” although now there is a new enemy: “frost”.

Distribution of bags of salt

For his part, the mayor of Madrid, José Luis Martínez-Almeida, has reported through Twitter of the points where “communities of owners” can go to collect bags of salt to avoid ice sheets. It is about 21 locations in the districts of Madrid.

The mayor also thanked all the environmental, mobility and emergency work teams of the Madrid City Council “for the long night of fighting against the snow in order to open vital axes for the city.”

Since it stopped snowing in the capital, according to the mayor himself, they began to work to solve the “real snow tsunami.” Likewise, Almeida warned the people of Madrid that it is necessary to stay at home due to the weight of snow on trees, ledges and the ice that is forming.

The truth is that neighborhood solidarity is standing up to the storm Filomena with cleaning shakes to prevent the snow from turning into dangerous ice sheets, cleaning the entrances to health centers or transporting hospitals in 4x4s through Telegram groups . Through various chats, professionals from the hospitals of the Community of Madrid try to cope with the lack of organization of the regional government. The goal: to be able to move to their posts and relieve colleagues who have accumulated long hours since Friday.

In addition, Army teams have transferred patients for dialysis to hospitals in the Northeast of Madrid. Yesterday, 66 patient transfers were made to be dialyzed to the hospitals of La Paz, Ramón y Cajal, October 12, Clínico San Carlos, Infanta Sofía, Getafe and Alcorcón.

The Military Emergency Unit has cleaned the entrances to Mercamadrid, to try to guarantee supply to supermarkets in the coming days. UME personnel have also worked at the entrances to hospitals and the Barajas airport.

The situation on the roads remains critical throughout the community. Chains and winter tires are mandatory on all roads.

In the capital, the buses of the Municipal Transport Company (EMT) will also not circulate this Sunday and the service will resume gradually after evaluating the situation, once this afternoon the snow has begun to remove from the main axes of the city.

In addition, the City Council has asked citizens who had to abandon their vehicles on the M-30 due to the storm ‘Filomena’ not to come to pick them up since the services of the road itself and the Municipal Transport Company (EMT) will transfer them to the nearest depot.

The Cercanías train service in the Community of Madrid will continue to be interrupted at least at noon. Martínez-Almeida, has asked the central government to open Cercanías “as soon as possible”, because it is an “absolutely vital artery for communication” in the city of Madrid.

Renfe has suspended all planned railway services with origin or destination in Madrid, both AVE and Long Distance and Medium Distance, at least until noon this Sunday.

The Adolfo Suárez Madrid-Barajas Airport will remain closed for part of Sunday until the situation is analyzed and it is established that the optimal conditions exist to allow airport operations to resume from the afternoon.

I have a letter for you