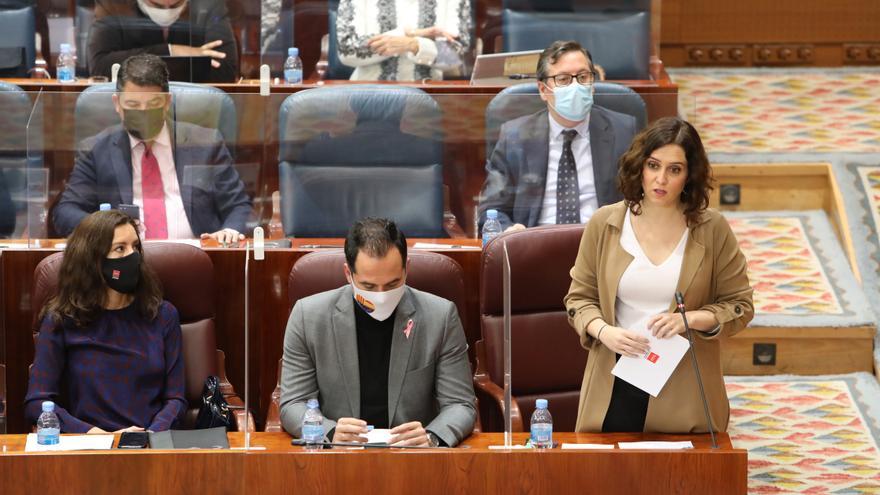 The union of all the political parties of the Madrid Assembly around the rejection of female genital mutilation and on the occasion of World Cancer Day, was just a mirage. Once the institutional statements were finished, the usual gruff tone returned to the Madrid Chamber that this Thursday ended with the accusation of the regional president Isabel Díaz Ayuso to Más Madrid of organizing sabotage in the emergency hospital Nurse Isabel Zendal: “You destroy the public because they need to live off the public, “the president launched after a string of accusations to the formation spokesman Pablo Gómez Perpinyà.

“What some of those close to him are doing is stealing and sabotaging the Zendal,” the Madrid president began in response to Perpinyà. “Instruments that have disappeared, thefts, broken doors, switches … boxes of medicines have disappeared, which disappear in the hospital and appear in its related media, coincidentally at the time saying that there is no such medicine, just the one they have stolen ; The hot water that they have disconnected by chance or when they begin to clog the bathrooms is missing “, listed a list of Ayuso accusations against Más Madrid.

“They have no shame,” Ayuso continued. “Of course, the public services are going through a very difficult time, but they have a worse time when their related unions affiliated with their party destroy everything: in the hospital, in the public media where they dry everything and do not let the workers work freely. journalists or in hospitals with their doctors and in education with their teachers, teachers and children who never leave them. You live off the public and are going to continue destroying the public because you need it, “concluded the Madrid president in the seat of parliament in Vallecas.

During their speeches, both Ayuso and Serrano ignored one of the day’s news about Zendal, the audio published by Cadena Ser in which the manager of the Príncipe de Asturias hospital, in Alcalá de Henares, advocated taking away the mobile phone from patients to who could not refuse to go to the emergency hospital after having run out of human resources because health workers have been sent to the pandemic hospital.

During the Government Control Session, the United We Can-IU spokesperson, Isa Serra, had also alluded to those alleged sabotages in the pandemic hospital: “It cannot be what they are doing with health professionals. They are blackmailed, they are they pressure and invent a campaign to discredit health workers saying that they are sabotaging the Zendal. Those who are sabotaging public health are you, “Serra had recriminated.

Perpinyà described after “very serious” the accusations of the president to Más Madrid and the health workers. “Not because of the deputies of Más Madrid who are used to these outings of everything, but it seems very offensive and extremely serious considering the situation that health professionals have been going through for a year in the Community of Madrid that President Ayuso accused them of something as serious as sabotaging a public hospital, “the spokesperson lamented.