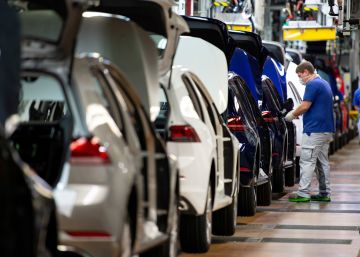 The coronavirus pandemic has forced companies in the automotive industry to undertake restructuring plans in order to cushion the hole it has created in their accounts. Many vehicle manufacturers have already announced staff cuts, in research and have even temporarily broken alliances that have more of a medium / long-term vision.

Daimler was the last to join the readjustments. The German group wants to reduce Mercedes-Benz’s fixed costs and investments in capital goods and research and development by more than 20% by 2025 compared to 2019 levels. Under this new strategy, the star firm anticipates achieve a return on sales of between 5% and 9% until 2025 under unfavorable conditions. However, the company’s ambition is to achieve a margin of more than 10% in a “strong” market environment. Daimler entered a loss in the first half of the year due to the coronavirus pandemic.

The German group registered a red number of 1,738 million euros until June, compared to the 907 million it earned in the same period of the previous year. In Spain, the Mercedes-Benz Vitoria plant, with some 5,000 employees, has already returned to normal and produces three shifts, although the forecast for this year was lowered from 152,000 to 123,500 vehicles. On September 4, production began on the EQV, the world’s first large 100% electric minivan.

For its part, the Volkswagen group has reduced the distribution of the dividend charged to the results of 2019, when it obtained an attributed net profit of 13,346 million euros. Before the Covid-19 crisis broke out, he proposed a dividend of € 6.50 per common share of € 6.56 per preferred security. Now, it will distribute 4.80 and 4.86 euros, respectively. In this way, the retained profits, about 855 million euros, will be transferred to next year’s accounts.

“In the post-covid scenario, the industry is going to have to face an undoubtedly complex moment. It must overcome the impacts caused by the health crisis that have manifested in all its harshness in the paralysis of activity, the breakdown of global supply chains and the drastic fall in demand worldwide, without renouncing the agenda set before. of the crisis, of mandatory transformation towards the mobility industry. This complex scenario will lead to an acceleration of alliances in the sector that allow capturing value, improving efficiency and sharing investments, ”Begoña Cristeto, former Secretary General for Industry and SMEs and current KPMG partner, tells CincoDias.

At the end of May, the Renault group announced that it will snip its workforce of 14,600 jobs in three years, which will not affect the Valladolid (2), Palencia and Seville plants.

The cut will occur without layoffs, through early, voluntary and negotiated retirements, and there will be 4,600 jobs affected in France. In Spain, it employs 11,000 people (almost 14,000 taking into account all areas) and operates four factories (which will not be affected): Seville, of gearboxes; Valladolid, one for motors and another for automobiles, where the Captur was assembled; and Palencia, where he mounts the Mégane and Kadjar models.

The company expects to cut costs by 2 billion euros to return to profitable and sustainable growth, after entering a loss last year for the first time in a decade. And it will undertake a reduction of its productive capacity of 20% until 2024.

On the other hand, Ford is also in a reorganization process that has included the appointment of Jim Farley as the new president and CEO of the company. The firm estimates to close the year with a negative result for the first time in ten years. Last year it already reduced its workforce by 7,000 people worldwide and, at the beginning of September, it already created another 1,000 fewer jobs in North America. The goal has been set to achieve savings of about 600 million dollars (508 million euros). The current staff of the oval firm is made up of about 190,000 workers.

At the end of September, it announced that the Almussafes (Valencia) engine plant will produce the 2.0-liter GDI engine. The announcement came a year after the Valencian factory received the bad news that it would stop manufacturing the 2.0 and 2.3-liter Ecoboost engines. According to the unions, this will maintain the workload until 2023. The company has also expanded production of the Transit Connect to 2024.

The European Automobile Suppliers Association (CLEPA) estimates that the automotive industry could lose 100,000 jobs in 2021.

PSA-Fiat. The PSA and Fiat Chrysler Automobiles (FCA) groups are facing the last few months to seal their merger and create the world’s fourth largest automobile consortium in the world. They estimate deliveries of 8.7 million units and recurring annual synergies of more than 5,000 million euros. The agreement is expected to close during the first quarter of 2021. However, under the situation of the health crisis, they had to review the terms of the merger to strengthen the balance sheet of both companies. Finally, Fiat will distribute an extraordinary dividend of 2,900 million euros, compared to the 5,500 million that it had originally planned, while PSA’s 46% stake in its components subsidiary Faurecia (capitalization of 5,867 million euros at the end of the market this Monday) will be distributed among the respective shareholders of both companies.

Renault-Nissan-Mitsubishi. Under the Franco-French alliance, Nissan advanced a three-year restructuring plan in May to save 2.53 billion euros. The closure of its Catalan plants is framed within it. It will also carry out a reduction in its production capacity of 20% until the fiscal year ending in March 2023, reaching a volume of about 5.4 million vehicles per year.