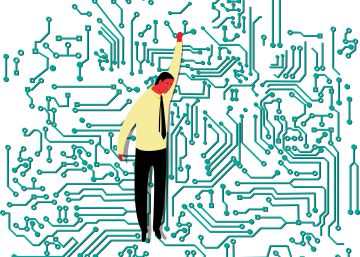 The developed societies are witnessing a technological revolution that is advancing rapidly in a globalized world. The clearest manifestation is possibly the automation of productive processes. The development of machines / robots that perform tasks, mostly routine and codifiable, that we previously made humans, is undoubted opportunities but also no lesser challenges. It entails opportunities because the robots undoubtedly perform these tasks with greater precision and speed -and consequently increases productivity-, and in addition they prevent people from carrying out very heavy and / or unpleasant tasks in many cases. These increases in productivity are undoubtedly an opportunity that could lead to an improvement in welfare for the whole society, or simply revert to increases in benefits for certain groups, mainly some companies in certain sectors. It depends to a large extent on how society responds to this moment.

And I want to highlight this conditionality because without a doubt the technological revolution in which we are immersed has winners and losers among the workers. The winners are the young people, sufficiently qualified in digitalized environments and aligned with these changes. These people are prepared to be and to adapt to those emerging jobs, high added value, which will undoubtedly get good working conditions. However, automation replaces tasks that were previously performed by people, and consequently, the losers of automation, at least potential, are those whose jobs disappear, and in addition, they are neither digitalized nor their qualifications are aligned with the changes technological Traditionally they occupied medium-wage jobs, but today either their jobs are in decline, or in the worst cases, they have lost them in the crisis due to the closure of companies or mass dismissals. It is a group of a certain age, with great work experience and relatively numerous in most developed societies.

And it is numerous because the aging of our societies is being caused by two effects: Firstly, because the medical advances and the improvement in living conditions is causing us to live many more years and better. But also due to the drop in birth rates that causes younger generations to be very insufficient for a balanced generational replacement. Therefore, the demographic situation in which we are today is not aligned with a technical change that would benefit a lot from digital youth, globalized and aligned in their training with this technical change. Of these, the winners, there are few, while of the others, the losers, there are many, unfortunately.

So the social challenge in the face of technical change is not minor. One possibility is to assist this process passively, which will undoubtedly cause an increase in the growing social and economic inequality between winners – both on the side of the workers and on the part of some companies – and losers. The market itself will not correct these inequalities, I would say rather the contrary. Another possibility is to adopt a much more active attitude as a society. The great economist Daron Acemoglou pleads for several economic policy measures with which I can not agree more. First, institutions must facilitate the implementation of "good jobs", that is, stable jobs, with decent wages, and protected. And for that there are certainly instruments, from labor regulations, to strict supervision, as well as the valorisation of labor institutions that work for it. It is necessary to counteract the market trend, which by itself tends towards the opposite. These actions will undoubtedly help the losses of the losers with the technical change to be smaller. Second, the inescapable commitment to education that reaches everyone equally, and is more aligned with the development of technical skills but also others, such as the development of creativity, teamwork, curiosity, satisfaction for learning, tolerance for the different … This educational commitment would undoubtedly facilitate a better transition of all citizens towards the group of winners with these changes.

But the proactive attitude of society is not limited to actions of public institutions. Workers must be aware of the changes and understand that without a very willing attitude to training and therefore to continuous learning it will be difficult not to lose the train of this technological revolution. And companies, of almost any size and sector, must internalize the continuous and permanent training of their workers not as an expense, but as an investment as important as the one they make in physical capital and in production processes.

Consequently, welcome are the technological changes in which we are already immersed and those that are to come, let us join them, but prepare our societies so that the profits reach the majority of the citizens and consequently increase the quality of life and the welfare of society as a whole.