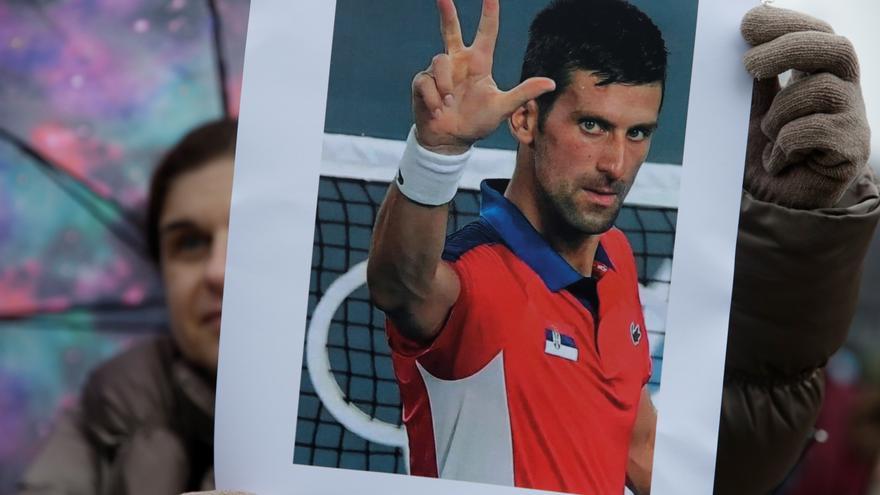 Australian authorities are investigating whether the Serbian tennis player Novak Djokovic he lied at his entrance to Australia when assured that he had not visited any third country in the previous two weeks, which could lead to their visa being canceled again, according to government sources cited by local media.

Djokovic got this Monday permission from an Australian court to stay in the country Despite not being vaccinated against covid-19 after appealing the revocation of his visa, although the Australian Government continues to have the power to expel him from the country.

A federal government source confirmed today to The Sydney Morning Herald that the travel statement that the athlete sent to request the entry visa is being examined thanks to a medical exemption for not having been vaccinated against covid-19.

According to the document, Djokovic checked the box "no" on the question of whether he had made any trips during the 14 days prior to the arrival in the country, which took place almost at midnight last Wednesday on a flight that departed from Spain and made a stopover in Dubai.

The tennis player, who according to his provided medical documents was infected with the covid-19 December 16, spent christmas in belgrade According to the photographs published on social networks, before moving to Spain, from where he boarded a plane on January 4 with transit in Dubai and final destination in the Australian city.

Djokovic assured the officials - according to the source, which was the Australian tennis federation, organizers of the Australian Open, who filled out the aforementioned document.

Australian law considers as a "serious offense" a false statement and that can carry a maximum penalty of up to twelve months in jail.

Upon his arrival in Australia, immigration authorities detained the 34-year-old tennis player, They canceled his visa and sent him to a hotel where he remained in isolation until Monday, considering insufficient evidence to achieve a medical exemption from vaccination.

The tennis player's lawyers appealed the decision to a Melbourne court that agreed with the Serbian athlete, who yesterday was able to train freely to prepare for the Australian Open.

Despite the court victory, the Australian Immigration Minister, Alex Hawke could also use his power to revoke Djokovic's visa and expel him from the country.