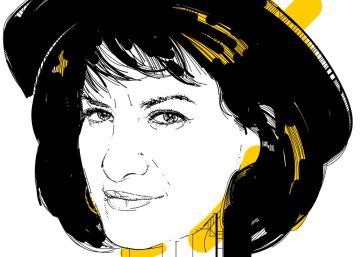 Poet, teacher and translator from Greek, Aurora Luque (Almería, 57 years old), has just published Gavieras (Viewer), for which he won the last Loewe Prize for poetry.

What do you think is the best and worst thing about confinement? The worst, the death of so many: the image of the vans removing bodies from Bergamo made me scream. And the dirty attitude of the Spanish right, infected by a more dangerous anti-political fanaticism than the Covid-19. The best thing is to witness a turn in history and Fortuna-velut-luna that forces you to rethink everything.

What have you discovered during this time? That it is necessary to simplify and seek slowness, silence and respect. That social networks dominate and control us and have robbed us of truly free time.

What book made you want to be a poet? Juan Ramón Jiménez discovered the capacity of words to say the Other, the rare, the complex and the beautiful. But book, what is called a book … The reality and desire. I actually want a song based on the poem to play at my funeral. ‘The ruins‘, a beautiful pagan oratory.

What other poem would you have liked to write? ‘Anchors‘, by Olga Novo, or’Free i love you‘, by Agustín García Calvo.

What topic about classical Greece is false? The one of measure and serenity: there is no such thing, but a passion for knowledge. The Greek poems and marbles contain a pure infatuation with life.

Why read the classics? The Greeks? Because they thought of everything for the first time from a wonderful freedom that allowed them to fly very high without the coercion of a vigilant authority and without obsessing over immortality or the afterlife paradises. They investigated the human with an unusual passion. That is why Calderón de la Barca’s sacramental cars have aged and, on the other hand, the Odyssey.

Why start so that we do not give up the first time? I dont know. I started with him Phaedrus Plato at the age of 16 and I fell in love suddenly. The Antigone and the Oedipus Sophocles never let anyone down.

What Greco-Latin poem would you recommend to a rapper? Well everyone. But look, since we are in this spring without hugs, the ‘Eve of Venus’: ‘Cras amet qui numquam amavit quique amavit cras amet’. It has a lot of rhythm.

What does a poet learn by translating? She learns a lot from herself, from her shortcomings. Translating is like stealthily entering the hyperactive laboratory of the mind of another or another poet. There is no more intimate and exploratory reading than translation.

If she hadn’t been a writer, she would have liked to be … Composer of music. Or a travel journalist (but the trip has died due to debasement). Or a papyrologist. As a child I wanted to be a scientist and an astronomer.

What was the last book you liked? The rereading of The furrow of time by Emilio Lledó. I have also been surprised by the freedom from which Irene Vallejo has written Infinity in a reed, without that self-conscious drooling so Spanish before the brilli brilli of new technologies.

What is the movie you have seen the most times? Without expressly looking at it, when they broadcast Doctor Zhivago I am always hypnotized until the frozen desk and the snowy house of Varykino appear, where Lara and Zhivago took refuge to die. Never has a commercial film so accurately encrypted the vital urgency of poetry.

What song would you use as a self-portrait? The simple thingsby Chavela Vargas.

What historical event do you admire the most? The collective impulse that gave rise to the democracy of Athens, when freedom was invented as a citizen good.

What is socially overrated? Soccer, that insubstantial juncture of calves and hit object.

Who would you give the next Cervantes award to? TO Clara Janés, Julia Uceda or María Victoria Atencia.

Why humans are easy prey for pandemics | Babelia