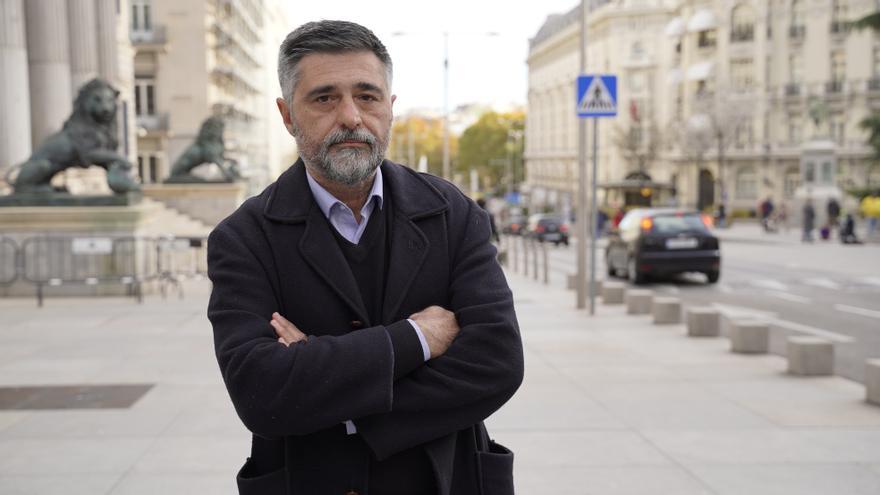 Augusto Vitale is convinced that cannabis regulation is inevitable. And it is not just anyone giving an opinion on the subject. Vitale is the former director of the Uruguayan Institute for the Regulation of Cannabis Control (IRCC) and one of the promoters of the law that legalized “adult use” consumption in his country. He knows what he’s talking about. “If this debate is archived [en España] time is being lost in a trend that is taking place in societies that are self-critical of their drug policies compared to others that do not, “he warns.” Germany is doing it now [en alusión al nuevo gobierno germano, que acaba de acordar la legalización integral], Canada did. We had to change too, “explains this trained psychologist.

Vitale arrived in Madrid last Friday to participate in the presentation days of the comprehensive regulation law that United We Can has registered in the Congress to be held this Monday and tell the Uruguayan experience, which was not easy at its start but has been settling. “Public opinion at the time stayed shocked“Vitale concedes,” when approved [la ley uruguaya, en 2013] there was 20% support, but José Mujica [el expresidente que impulsó la normativa] it had an impressive political will and a few years later support has grown to over half the population, “he explains.

The Uruguayan regulations were carried out in the spirit of “restriction” and of being able to reach people who were already using cannabis, especially the so-called problematic uses, but who had nowhere to turn for help. “Mujica explained it all the time, that this was not done to give access to cannabis to anyone, but to attend to those who pass away” with its use, Vitale says. During the conversation, almost regardless of the question, this expert will repeatedly return to terms such as “harm reduction” and “access to healthcare.”

Because, like it or not, cannabis is a reality. “There is a greater risk when cannabis is in the street or in dark places, when there is a great standardization or access, than in setting rules, having a control institute, penalizing those who misuse and also participating actors at the business level “, reflects Vitale. The process in the South American country was not easy. “There was a lot of dialogue with the institutions, with civil society, we held 30 debates in each capital city and in the interior, where parliamentarians for and against were heard,” he recalls.

This process contrasts with the situation in Spain, where despite the fact that a subcommission is open that will foreseeably agree to regulate medical cannabis –For recreational use, there is still a lack of travel because it does not have the essential, according to the current parliamentary artimetic, support of the PSOE– the public debate is conspicuous by its absence.

The result of all that Uruguayan process was a regulation model focused on the user and that, in short, contemplates three access routes with marijuana prices established by the State, and all three require registration with the Government at the risk of falling into the illegality. Consumers can opt for self-cultivation, with a maximum of six plants per home, by stocking up in clubs, which can have up to 99 plants, and through pharmacy sales, a way that enables the user to buy a maximum of 40 grams of marijuana per month. At the moment, access is only allowed for residents of the country, although Vitale explains that at this moment “an access for tourists is being studied” after during the first years a kind of effect called in the region for legalization was feared That did not happen, or at least not at alarming levels.

But the important thing, Vitale emphasizes, was to reach problem consumers who operated on the margins of the system. “Problematic drug use occurs when it is stigmatized and the person feels that he cannot go to solve his problems either to a policeman or to a health center, and begins a second exclusion or self-exclusion from the available services,” he explains. “There was a lot of work with this, we developed many strategies that allowed us not to see these people who use drugs as people to be excluded, but to explain.” The problem was approached from several angles, always with the idea of ​​attracting consumers. “There was a deployment of low-threshold centers, of attention, listening and community treatment for problem drug users, different from health care. That allowed to link many people to the health services of many people who did not do it before”, relates.

But cannabis is still a drug – just like other legal drugs, such as tobacco or alcohol – that has psychoactive effects and can cause psychotic outbreaks, especially among young people, it is objected. How do you deal with the State protecting this, especially a psychologist like him?

“Problematic use in general does not exceed 10%, although that does not ignore that each substance has its risks and possible damages, and cannabis has a proven psychoactive effect and there is a lot to work on in accessing minors”, he concedes . “An entire chapter was devoted to the educational issue. The psychiatric society was one of those that most alerted that in predisposed people it can generate unwanted effects or generate specific crises, but also observed that the opportunity to manage what happens when it is regulated was an opportunity very good. One of the organizations most critical of the law appreciated the opportunity for debate and rehearsing a regulatory experience. There is a complexity that must be addressed to regulate it properly. It has to be responsible, for that reason there is no promotion, this is not a common object of the market “.

And he goes further: “We even wish that alcohol was a less market object, lower the accessibility of alcohol and tobacco. I am not a crusader, but if you know that prohibition led to the war on drugs and that this ended up being against users … “, criticizes world drug policy since in the 1960s the UN included cannabis” without any evidence “among the most harmful drugs and without medicinal properties.

Another aspect that was sought with the regulation was to reduce the role of drug trafficking, very present in the country and in the region and “that puts in solfa instances of the life of the people with the settlement of accounts or the struggles for the territory “. “80% of the illegal market in Uruguay was cannabis,” explains Vitale. With two-thirds of the main consumers “adhered” to the system, the underground market has not disappeared, but it has suffered a notable setback in the way of offering a quality product, better than the so-called pressing of the narco, that would convince users. “With the quality of what is offered in the regulated market, there has been a much smaller presence of pressing, a change in trend has been observed “, he closes, although he admits that drug trafficking does not disappear by intervening only on cannabis as long as there is demand for other drugs.