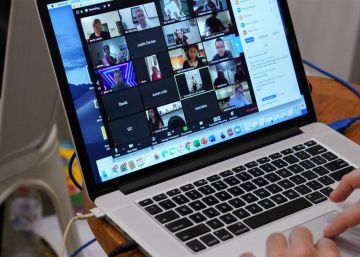 The ban on holding meetings of more than six people, imposed by the health authorities to contain the third wave of the coronavirus, is particularly affecting neighboring communities that have been practically paralyzed for a year as a result of successive capacity limitations. Some owners have decided to overcome the obstacles by celebrating together on Zoom, WhatsApp and other similar applications. Now these online assemblies could end up being judicially annulled and, with them, measures as important as the installation of an elevator or the claim of unpaid receipts.

Neighborhood communities are obliged to hold a general meeting, at least once a year, to approve accounts, renew positions and deal with matters that require the consent of the owners: spills for works, legal actions against defaulters, etc. However, the current Horizontal Property Law does not contemplate that these matters can be dealt with electronically. Specifically, the rule provides that the owners attend the meetings in person and in any case that they delegate their vote to a third person. Nothing more.

These strict legal requirements, together with restrictions related to the state of alarm, could serve as the legal basis for requesting the cancellation of any informal meeting that has taken place in the last eleven months, according to experts. “The minutes are open to challenge whether the meeting was held in person or through the Internet, because in no case is there legal coverage,” warns Alejando Fuentes-Lojo, a specialist in real estate law.

Specifically, if the owners decided to meet physically, any of them could claim that the necessary security measures were not being met and that, therefore, the conditions were not optimal at the time of the call. But it is also that, if the meeting was made by video call to avoid contagion, they have the right to oppose any vote carried out in this way because it is a formula that is not expressly provided for by current regulations. A real breeding ground for disputes between neighbors in which elements such as the digital divide, legal security and life-long quarrels are intermingled.

Catalonia has been the first Autonomous Community to recognize, by law, the validity of online meetings. The General Council of Property Administrators has already asked the Government to promote a similar reform in the rest of the State, but the initiative has not yet materialized. “The legislative inaction is clamorous and is causing serious conflicts in the day to day,” says Fuentes-Lojo

One of the main problems caused by the lack of regulation adapted to the current pandemic scenario is the increase in defaults. In order to claim a fee from defaulting neighbors, they must be included in a list of debtors; then warn them to comply with their obligations and, if finally they do not do so within a reasonable period of time, the president or (failing that) the administrator must be authorized by vote to take legal action. But all these decisions must be adopted in assembly and by majority, something impossible today.

The legal uncertainty surrounding the neighborhood associations has led many communities to postpone sine die claims due to the fear that they may be left on paper. “We are concerned that the lawsuits will be finally dismissed by the judges and that we will also be sentenced to pay costs,” affirms the lawyer Miguel Jiménez, who represents the interests of several of them.

For Jiménez it is evident that this situation of impasse It is contributing to the suffocation of a sector that moves hundreds of millions of euros a year and on which thousands of direct jobs depend directly. He assures that “luckily” the vast majority of owners are complying with their obligations, but acknowledges that a progressive increase in delinquency is beginning to be noticed. “There are families in ERTE or with all its members unemployed who do not have among their priorities the payment of fees, which is logical, but there are also those who do not pay them because they do not want to.”

Be that as it may, in some buildings money is starting to run short to meet common expenses. This is demonstrated by Rosa Gómez, president of an eight-story community in the Madrid neighborhood of Vallecas. According to account, last year there was only one defaulter on the block, but in the last eleven months three more have joined. If this continues, they will soon enter the red. “The funny thing is that some have rented apartments and are collecting rents of more than 700 euros,” she says indignantly.

Rosa recalls that all the neighbors agreed to reform the façade two years ago, but they have not yet given the green light to the corresponding spill, so the reform will have to wait. It is another consequence of the paralysis of neighborhood councils: the deterioration of buildings. Fuentes-Lojo points out that it is something very common and at the same time dangerous, since the community is in charge of keeping the property in good condition. “That means that it is directly responsible if any personal or material damage occurs due to falling rubble, leaks, etc.”.

The law does allow the execution of very urgent repairs with the permission of the president or, failing that, the administrator. Even so, Jiménez explains that this category does not include such necessary works as the installation of an elevator for disabled people on the stairs of the portal. “There are owners with mobility problems who have been waiting a year for one of these devices to be installed and hardly leave the house,” he says.

Get back to normal

Despite the multiple factors against it, there are communities that are functioning with a certain normality and within the legal framework. This is the idea defended by the property administrator José María Águila-Bonfill, who says he has not stopped holding neighborhood meetings since the de-escalation “without major problems.” The method, as he describes, is simple: give the owners a choice between holding face-to-face meetings (of no more than six people); make telematic meetings (as long as everyone has a connection) or complete a multiple choice test (folio in hand).

This system, Águila-Bonfill emphasizes, has allowed the communities that he manages “not to fall into inaction and solve many conflicts”, although he points out that if the agreement is not possible there is always the option of delaying the most thorny issues, which normally they must be discussed in a general meeting, for a more propitious moment. “In fact, a recent decree allows them to be postponed until December 2021,” he highlights.

For his part, Jiménez applauds that some professionals have found “ways to get out of trouble” but insists that not all problems can be solved by consensus, much less “in a moment of social tension like the current one.” In this sense, he hopes that sooner or later the legislation will be modified so that telematic meetings will stop being informal meetings and will become true assemblies, with all those of the law.