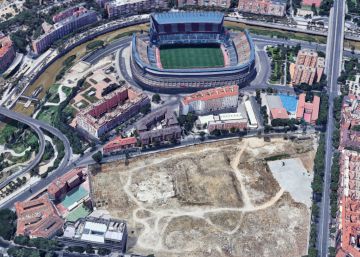 The Operation Mahou-Calderón begins to clear with a high interest and return for the two current owners of these lands, the Atlético de Madrid and Mahou, in the surroundings of the old mattress field and the old brewery factory. Four housing cooperatives have shown interest in the first of the plots owned by Mahou, as well as an alliance between the fund manager Azora and the Gestilar promoter they have made two of the floors of the club controlled by the Gil family.

An alliance between Core Gestión and Arjusa, management companies of housing cooperatives, have shown interest in taking over the parcel called RC5, put on sale by Mahou, an operation that advanced Five days in May. Atletico de Madrid and the group of beverages share 50% of the lands of this urban operation. Each of them has around 63,000 square meters, divided into three lots each.

Core and Arjusa already market the promotion of 180 cooperative housing for that plot of Mahou, called Madrid Río Living, as you can check in their respective websites. This type of companies look for cooperative time to be able to face the purchase and development of the work. To this interest would have been added another manager called Serprocol, according to business sources, which also announces on its website a promotion in Operation Mahou-Calderón.

Meanwhile, another cooperative manager, Ibosa, has also launched commercially a promotion of 196 houses, in this case for the RC1 plot, to be ready when Mahou puts on sale those lands. These managers have the capacity to make better offers for the land since their margins are much lower than those of the traditional promoters.

In the case of Atlético has already closed the transaction of two plots, sold to Azora. Initially it was published that the interest of this fund manager was to raise 350 homes for rent, but finally it has been associated with Gestilar, in charge of managing the work of houses that will go on sale. Both partners have paid 110 million euros for these lands.

The last plot owned by Atlético still has no buyer, but for it They bid the socimi Vivenio (which is the favorite and has behind the Dutch pension fund APG and Renta Corporación), an alliance between Stoneweg and Hines and, finally, the cooperative manager Concovi. In the case of closing the agreement, Vivenio would build housing for the lease. That is the biggest field, for which the club will pocket 88 million.

Adding both plots, the Atlético will enter 198 million, plus the costs of urbanization and demolition of the Calderón, which will later transfer to the buyers of the land. In total, the bill will exceed 200 million, the figure that the football team had initially marked and that will pay off the debt that contracted with Carlos Slim, for 200 million, in the construction of the Wanda Metropolitan Stadium.

Atlético has achieved an impact price of 3,100 euros per square meter of land, which is a record in that area of ​​Madrid where land is scarce.

Atletico began to probe the market in 2017, advised by the consultancy CBRE, but until the processing of this urban area has been cleared, the closing of the transaction has not come close.

Mahou has waited to that this area had cleared the last urban procedures to go to the market in search of buyers for the first of its soils. The Junta de Gobierno of the City Council of Madrid approved the reparcelling of this development in April, having reached a definitive agreement with the two owners at the end of the year with a timetable for the works, which have already begun with the demolition of the stadium and which, in the residential part, it could begin as of 2020. In the case of Mahou, advised by Colliers, it takes advantage of the rising price of new housing prices in that area to market without haste. In those lots was the old factory, already demolished, of the brewery.