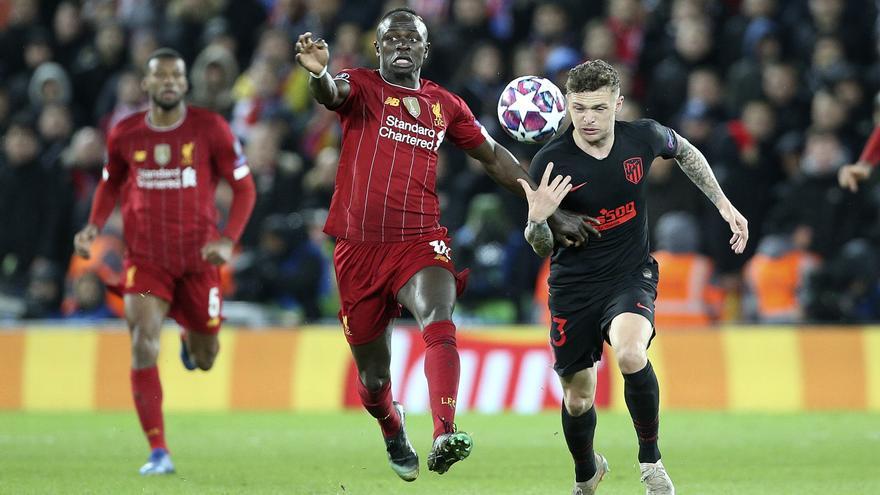 A year and a half ago, Athletic lived ecstasy on Anfield Road, where it surpassed Liverpool in extra time to qualify for the quarterfinals (2-3). The same scenario and the same rival are repeated this Wednesday, 602 days later, but now it is the need to add what marks the rojiblanco spirit.

That of that March 11, 2020 was the last great night of European football before the definitive extension of the coronavirus pandemic. An epic duel in which Atlético dethroned the European champion, just before the world stopped due to the confinements in different countries and football became a silent spectacle without fans in the stands.

Like then, Liverpool is today a fearsome team. At that time the current European champion, now again an offensive machine that has not lost a single game in 15 official matches, with 44 goals in favor and only 13 against. With an iron fist in the Champions League, 9 points out of 9 possible, and that could ensure the pass to the second round if it is imposed this Wednesday.

It is also this Atlético a competitive rival. He showed it in the Wanda Metropolitano, tracing the two ‘red’ goals in 13 minutes with two goals from the French Antoine Griezmann, the same one that unbalanced the duel with an error, an attempt to control in which he raised his leg more than was prudent and hit Brazilian striker Roberto Firmino. Dangerous game and red, an inferiority that precipitated the 2-3 penalty of the Egyptian Mohamed Salah, and that leaves him out tonight.

However, the qualifying situation is much more pressing for the rojiblancos, second with 4 points, the same as Portuguese Porto, who play in Milan against a transalpine team at the limit that they have not yet added. Atlético need at least 5 of the next 9 points not to depend on anyone.

The rojiblanco coach, Diego Pablo Simeone, he insisted on Tuesday that, whatever happens at Anfield, there will be a lot ahead. “There is nothing guaranteed Not tomorrow or the day after, each team will have to compete in all three games because all three are equally important, “said Simeone, who wants to avoid any mention of revenge regarding the 2020 duel.” In football there is no revenge (… ) Tomorrow is a new game, “he added.

Of the protagonists of the first leg of two weeks ago Griezmann will not be there, but if Salah, contender for best player of the year and with a spectacular month behind him, culminating in the aesthetic goals he made against Manchester City (2-2) and Watford (0-5) and his hat trick against him Manchester United (0-5). The Egyptian achieved an unprecedented ten-game streak scoring with Liverpool, broken this weekend in the great game against Brighton (2-2).

Showing off at Anfield and against Atlético is Salah’s pending account as the last warning before the match is delivered. Golden Ball. As Jürgen Klopp already showed in the first leg, beating Atlético is an extra. It is a serious revenge for what happened in 2020, when the German came out very angry after meeting a team that, in his words, “should play something else with all the quality it has “.

To stop an Atlético who, whatever happens, will be behind him in the standings when the day ends, Klopp has two bad news in the middle. Naby Keita will not be able to be there and putting Fabinho would be a risk, since the Brazilian has been out for four games, although he will be available. It also does not have James Milner, injured in the duel against United, while Thiago has not played a minute for a month and a half due to a muscle problem, although he is already available. Alex Oxlade-Chamberlain or risking Fabinho as a more defensive option in the pivot are the alternatives for Klopp, who in the rest of the positions will be able to align his eleven of gala.

The casualties are also large for Simeone. In addition to Griezmann, central Stefan Savic, who will serve his fourth and final punishment match after being sent off last season against Chelsea, will also be suspended due to suspension. Injured are his favorite interiors, Thomas Lemar and Marcos Llorente, and pivot Geoffrey Kondogbia He has not trained with the group due to a blow, although his coach did not rule it out in the previous one.

Without them, the Argentine coach could keep the players that they beat Betis 3-0, replacing Savic by Felipe Monteiro, in a defense that would be completed by José María Giménez and Mario Hermoso as centrals, and Kieran Trippier and Yannick Carrasco as lanes. The other loss, Griezmann’s, will give entrance back to Joao Félix, who comes off his debut as a scorer against Betis and will probably play heeled to the left in a 5-4-1 scheme, with captain Jorge ‘Koke’ Resurrección and Rodrigo de Paul in the middle, and Ángel Correa on the right. Luis Suarez, back to what was his stadium between 2010 and 2014, it would be the only reference.

A duel from power to power, in which the coaches will be fundamental, both for their different way of looking at football and their ability to change the game. In the first leg, Simeone’s habit of rushing off the pitch after each match generated a little controversy when Klopp sought him out to shake his hand after the match. “If I had known it doesn’t, I wouldn’t have tried“said the German on Tuesday. At Anfield they will meet again, in a night of rivalry down to the last detail.