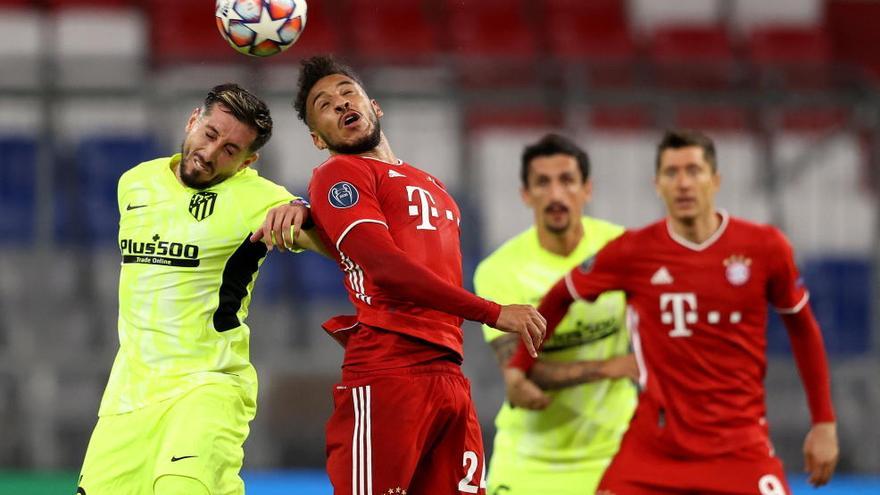 He Bayern Munich, current champion of Europe, gave a blow of reality to the tournament and the Atlético de Madrid,Atlético de Madrid what succumbed 4-0 against a dominating and effective rival, the first half served him to sentence with goals from Coman and Goretzka and rounded off the victory in the second through Tolisso and Coman.

A win that is a double reality hit. First for the hopefuls for the European title who might appreciate any hint of complacency in the team of Hansi flick, champion of everything last season and dominator at the start of the new season -with the four of this Wednesday they are 29 in favor and seven victories in eight official matches-, despite the doubts that surrounded the match due to the positive result of the German winger Serge gnabry just a day before.

Impact suffered especially by Atlético, which proved that nor is its defense so impregnable to withstand the most demanding attacks in Europe nor his attack so convincing despite having the Uruguayan Luis Suarez, even with the goal annulled to the Portuguese Joao Felix in the second half for offside of the Uruguayan.

The Spanish team -fluorescent yellow on the night of Munich, without Diego Costa, Saúl Ñíguez and the Uruguayan José María Giménez due to injury- came out pressing, reducing spaces to Bayern and fast in the combinations, with a play that ended in the low center of the Brazilian Renan Lodi for Suárez, who narrowly missed.

It was a sterile declaration of intent, answered minutes later by a volley from the Pole. Robert Lewandowski after a center in the Coman race. The signal for the European champions to take command of the match with possession initially without danger except in isolated actions, a shot on a stick by Niklas Süle after a corner kick or a very corner kick from the Frenchman Corentin Tolisso -the substitute of the Gnabry- section that Oblak covered.

It seemed like a tiresome, restraining domain, but all Bayern was doing was preparing the game until the right moment, which arrived in the 28th minute, with all of Atlético in their own field, when Kimmich was rejected. His remote-controlled center to Coman, neglected by the Englishman Kieran Trippier, put the French winger with everything in favor to beat Oblak with his right leg.

Of the Atlético had barely seen what the Bavarian team had allowed, a couple of combinations of Yannick Carrasco and Joao Félix on the left, because Bayern had the game where they were interested: in search of a counterattack to settle the duel against a Spanish team that had to try to level the electronic.

He found it, again, on the right side, in which the Mexican Héctor Herrera – until then having a good game and even doubling Trippier to generate superiority on the right – lost a ball against Tolisso that allowed Bayern to put together a deadly counterattack : Lewandowski’s run, Coman’s back pass and Goretzka’s strong cross shot, straight into the back of Oblak’s goal.

For an Athletic lost and unarmed, the referee’s whistle for the break was practically a relief, since in three minutes he had accumulated three yellow cards as a result of desperation, for Lodi, Koke and Herrera.

Passing through the changing rooms made Simeone’s men come back more spirited, and they even saw themselves momentarily closing the gap with a goal from Joao Félix, who had taken advantage of a clearance from the Bavarian defense to the center of Trippier to shoot and score, but it was offside de Suárez, who obstructed Neuer’s vision.

Like a mirror of the first half, after that warning from Atlético there was no more, but a new avalanche from Bayern, this time with less clarity: a header from Pavard, a deflected cross shot from Müller … Carrasco had the option to discount in a counterattack led by Joao Félix, but he was entertained and fired high.

Y the European champion punishes indefiniteness. Tolisso did it, with a missile from outside the area to Oblak’s left squad, and Coman, taking advantage of a counterattack to make the fourth against an already dislocated athletic defense. Bayern want his title and Atlético still has a lot of work to do to challenge him.

Incidents: Match of the first day of Group A of the Champions League played at the Allianz Arena in Munich without spectators due to the COVID-19 pandemic.