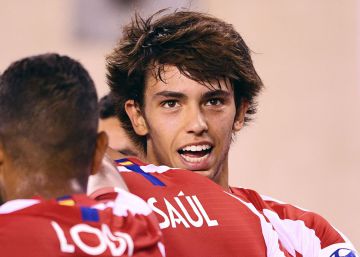 It is not that the method or requirement has varied, or even that the coach has decided to completely transform his script after the loss of the identity core with which he formed the most successful block in the recent history of the club.

The new Atlético led by Diego Simeone is still a recognizable, intense team, and with a behavior that is in tune with the roots of the cholismo more elementary The novelty, however, is that according to what he is demonstrating in the preseason, where he adds all his matches for victories, this behavior is being reproduced from the outset with a template that has incorporated eight players.

To the good work of the newcomers, with special mention for João Félix, the riskiest bet and which is being discovered as the true sensation of summer (two goals and three assists in three games), has also added the appearance of some young people from Subsidiary like Rodrigo Riquelme – and names without much posed in the past season like Vitolo (two goals) or Diego Costa (five) -, who have broken with the breakers of a historically complicated mold for newcomers.

"It is very screwed to enter the team," they repeated as a mantra in the club until recently to try to justify the indispensable period of acclimatization to which all rookies were subjected – with obvious failures such as Jackson Martinez and Gaitan – regardless of your cache

“I am very happy with the work of the whole team and with the new players that have arrived. Everyone is adding from their site to arm us for the future, ”said the Argentine coach Thursday Atlético's victory against a combined star of the US MSL the one he faced in Orlando. “The team is working well. The stage Los Angeles de San Rafael more these days in the United States are serving. The players are making a great effort and are being reflected ”, added the Argentine coach, who has been introducing different combinations between fixed players and variables during all his commitments except for the match against Real Madrid.

The two weeks of specific work carried out by the workforce in Los Angeles de San Rafael, the usual operations center in recent years, have been key when working on the coupling of the new parts. Last summer the team concentrated on Italy after completing a first tour of Asia, something that did not satisfy the wishes of Simeone and his coaching staff, which justified the string of injuries that occurred at the beginning of the course for that change of air.

The defensive line has been the main work area of ​​Cholo and his second, Mono Burgos, where, even absent Giménez, only Savic and Oblak have maintained their condition as veterans with gallons. From there, the game scheme designed for reconversion has dealt with two game approaches, 4-4-2 and 4-3-3, the latter being the one the Argentinean has most influenced. All of this, of course, without abandoning physical preparation, a factor that was decisive in the derby win (3-7) a week ago.

Atletico walks on rails in a set-up with new pieces that seem to have understood their function and without fear of taking the place of the previous ones. The rojiblancos still have two preseason games against Atlético de San Luis and Juventus. A rival who eliminated them in the last 16 of the Champions League last season and closed a circle that today reopens with a new old design.