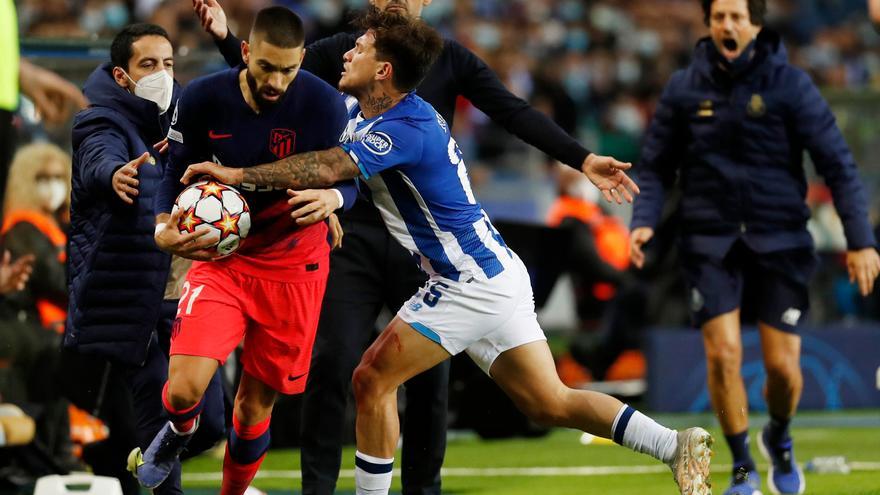 The team did not fail Diego Simeone, between criticism, between doubts, between uncertainty, between mistrust of their last meetings, within the nightmare that lately is the Champions League for the rojiblanco team, who woke up from her suddenly, to demonstrate their character, to rediscover the forcefulness in the two areas, the most irrefutable argument whatever the scenario and the adversary, and to survive in a competition in which he crossed the cliff many times, several times this Tuesday.

Diego Simeone did not have neither Savic nor Giménez nor Felipe nor Trippier, three of his four centrals and the titular right back. And at 13 minutes he lost his best scorer, his highest-ranking footballer, the best of all when the opposite goal is in front: Luis Suarez. Injured, devastated, even with a few tears when he took a seat on the bench, amid the frustration of getting off from such a definitive meeting. A severe setback for him Athletic, another one to overcome in a situation to the limit. Double or nothing.

The replacement was Matheus Cunha. Not Joao Félix, who did not play any minute. An indication today of what is the moment of the Portuguese attacker in this Atlético, beyond the fact that the Brazilian is perhaps the natural change of the Uruguayan ‘9’. Correa and Lodi also entered. He does not.

Suárez’s injury was not an excuse for Atlético either, which sought its reinvention against casualties, at times rebelled against circumstances and faced with reality, which is not as good as on other occasions, but which was able to shake up the duel first through Carrasco, before declining again, also due to the merit of Porto, that devoured him for a while with his pressure, and later win it with Griezmann.

Even in the first half, between the tension, between the intensity, between the struggles, there was also room for talent. Carrasco dribbled to three, burst into the area and put together a dance around the opposing goal that nothing else frustrated the goalkeeper Diego Costa. Up to two times. The first, attentive, timely, in Lemar’s auction; the second, in the later shot of Marcos Llorente. In between, by a couple of centimeters, no more, Griezmann did not reach the ball well or beat the goalkeeper. The second would have been a sure consequence of the first.

It was not only an opportunity, but also a loud ‘cry’ that Atlético could go to the second round. That he was not going to give up. That he was going to give everything he had, in his body and in his soul, to remedy in the last day everything that he had allowed in the five previous appointments.

But it wasn’t that simple. Because Porto it is a good team, hard-hitting, ambitious, powerful. And because not only did he have to win, but he did not, at least by the same score and number of goals, Milan against Liverpool. At San Siro, before half an hour, Tomori overtook the Italian team. Before the intermission, the English block tied. There was still life. Long life, especially since he had survived the rival offensive then.

But Atlético needed goals, which had a very bad time since then, overwhelmed, with constant losses of the ball, locked up by the Portuguese team… And saved by Jan Oblak, who may have better or worse days, but there are so many – countless – the first and so few the seconds that he is a goalkeeper who does not admit discussion. His stop at Luis Díaz was formidable. Without it, it would have been a goal.

The sequence of subsequent corner kicks put Atlético back on the edge, relieved when the duel stopped in the 46th minute, but found the same situation again as soon as the game resumed its activity, again supported by the imposing Slovenian goalkeeper, that stopped another occasion of Mehdi Taremi, repelled with the right foot, and, suddenly, resurfaced forcefully in his attack to hit with the 0-1, in a corner kick that Lemar threw, that was combed by a defender and that Griezmann riveted, alone, at the far post. It was the 55th minute.

And not only that, but Origi, almost at the same time, scored the 1-2 in Milan for Liverpool. Atlético was in the second round, which scored and was reborn, also in the game, also in the counterattack, with a spectacular action by Matheus Cunha that Pepe saved when it was goal or goal, when the game, the last day, the possibilities, had turned in favor of the rojiblanco team, until Yannick Carrasco made a childish mistake. Of fingerling. In the 67th minute, the Belgian international winger is a repeat offender, whose mistake is inadmissible. He went to the shower.

Matheus Cunha arranged it, who, having seen what he had seen, again promoted numerical equality. Amid so much tension, Wendell put his elbow on the nut, he went to the ground, the referee Clement Turpin, perhaps influenced by what he had done before with Carrasco, sent off the Porto side, just seven minutes on the pitch, to derive both teams in a massive discussion. The round of 16 was at stake. There was no truce until minute 90, when Correa, first, and De Paul, later, sentenced the classification 0-3.

Incidents: match corresponding to the sixth and last day of group B of the Champions League, played at the Do Dragao stadium before some 40,000 spectators.