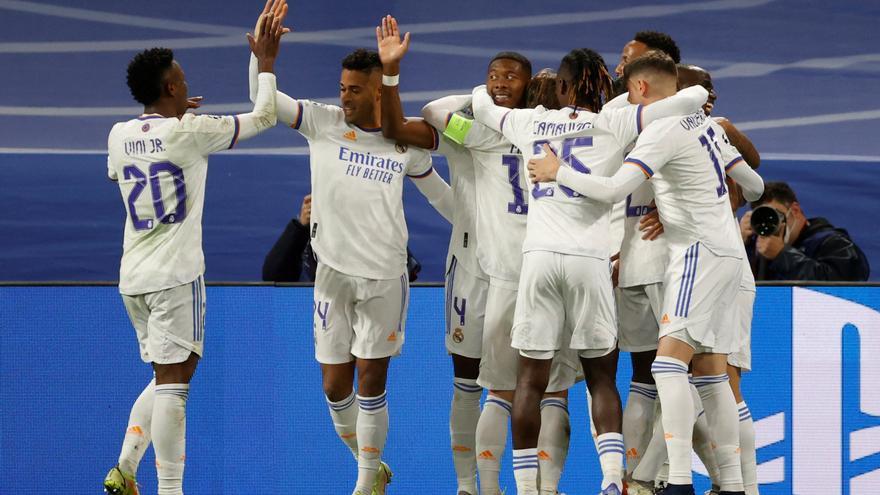 The Atlético de Madrid, defender of the title, goes to the Santiago Bernabéu reinforced by his momentous Champions League victory in Porto but aware that he faces a derby that has almost a final character, in which he needs to stop the escape of the leader, the Real Madrid, so as not to say goodbye early and reopen the fight for the LaLiga Santander title.

Italian Carlo Ancelotti's team is in awe. Not even the loss of Karim Benzema, who could reappear this Sunday, has reduced the effectiveness of the white box one iota. Accumulate six league victories and nine in total including the Champions League, in which they have gone to the round of 16 as first in the group after defeating Inter.

This streak has allowed him to open a gap more than important. They beat Sevilla by eight points (this one with one game less), Betis by nine and Atlético (also with one game pending) and Real Sociedad by ten.

There is a long season ahead, but a Real Madrid victory would not only reinforce their leadership even more, but would leave Diego Pablo Simeone's team further from trying to revalidate their league title. Hence the tremendous importance of the match mainly for the rojiblanco team.

If Ancelotti and all of Madrid are waiting to see if Benzema can reappear to lead the attack again together with the Brazilians Vinicius Júnior and Rodrygo Goes, Simeone also has numerous problems related to nursing, which the Uruguayan Luis Suárez and the Croatian Sime Vrsaljko swollen in Porto, although the evolution of all the injured will also have to be checked.

The athletic team needs to find that competitive character that it brought out in Do Dragao, as so often in difficult moments, to compensate for the unexpected stumble against Mallorca with a triumph in the derby, something that has not been achieved in the last seven games, which have resulted in a draw or victory for Real Madrid.

Sevilla, after the disappointment of Salzburg and their elimination from the Champions League, you will visit the New San Mamés, a fiefdom that is not good at all. It will also do it without its captain, the Croatian Ivan Rakitic, sanctioned and enraged for not having shown his potential in continental competition. He is forced to face his fetish competition, the Europa League, whose final will be played this season in his Ramón Sánchez Pizjuán.

Athletic has added 21 of the 24 points that both teams have disputed in the Cathedral. Marcelino García Toral's men need to increase this figure after seven games without winning. For this, it is essential that they find the way to the goal that is costing them so much. Not an easy task against the best defense of the tournament.

Another great match of the day will face Betis and Real Sociedad at Benito Villamarín, a shock that appears exciting, with two teams with good taste for an attractive and daring football, although they live opposite tendencies.

The Chilean Manuel Pellegrini's team has settled in third place after linking three consecutive victories, the last at the Camp Nou, and that of Imanol Alguacil has dropped to fifth after three games without winning and without scoring and the last two lost to Espanyol and Real Madrid.

Barcelona begins a new stage, in the words of Xavi Hernández after the bump of the farewell to the Champions League. He moves to El Sadar to begin to find the reaction and the turning point that he so needs against an Osasuna who has gone from being one of the revelations of the league start to chaining seven games without winning.

Jordi Alba had to retire early in the Allianz game. Added problem for Xavi, who will have to recover the left-handed side and more men who were 'touched' in the physical section, not to forget the mood. The team is forced to rise up in this 'new reality'.

Too Villarreal is in need, whose situation in the table, thirteenth closer to the red zone than Europe, is far from what was expected. With less rest than planned due to the postponement of the match against Atalanta due to the tremendous snowfall that fell in Bergamo, he will receive al Rayo, the surprise of the championship with his sixth place, although he has based it in his fort in Vallecas.

Bottom line Levante, who has confirmed the continuity of Italian Alessio Lisci as coach of the first team after assuming the position on an interim basis, continues to pursue the first victory of the course. It will not have an easy commitment against Espanyol, which is one of the best teams in the championship at home.

The urgencies will return to stalk the Mendizorroza stadium, where the faces Deportivo Alavés and Getafe will be seen, separated by three points in the lower zone, so both need victory to catch air in the seventeenth day of LaLiga Santander.

Cádiz and Granada, meanwhile, star in another duel for permanence in the Andalusian derby of the day.

Elche, for its part, visit a Valencia that trusts that its triumph in Vigo It is worth as a starting point towards the noble zone.

The Celta of Argentine Eduardo 'Chacho' Coudet, who has not just taken off, He will not be able to count on his great reference, Iago Aspas, sanctioned and injured, in Mallorca at the meeting that will open this Friday the seventeenth day.