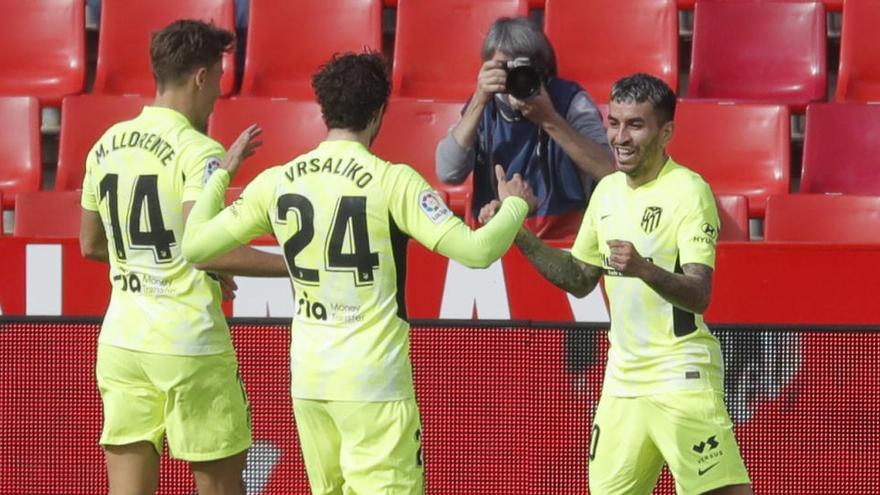 The Atlético de Madrid met again this Saturday with the victory to continue as the outstanding leader of LaLiga Santander, by imposing his effectiveness in the Nuevo Los Cármenes and win by 1-2 to the grenade, which adds five days without winning, with so many in the second part of Marcos Llorente and the Argentine Angel Correa.

After an even first hour of the match, in just a quarter of an hour Marcos Llorente put the visitors ahead on the scoreboard, the Venezuelan Yangel Herrera equalized for the Grenadians and the visitors clung to their greater efficiency so that the Argentine Ángel Correa signed the 1 -2 fortunately, when he touched the ball in Jesús Vallejo at the edge of the last quarter of an hour.

The coach of Atlético de Madrid, the Argentine Diego Pablo Simeone, had the last minute sick leave of Víctor Machín ‘Vitolo’ due to acute gastroenteritis, and introduced two changes to his eleven Regarding the last match against Celta, with the entry of Mario Hermoso and Belgian Yannick Carrasco after both overcoming the coronavirus.

The Granada, that like the mattress box faced the confrontation quite depleted by casualties, He was subdued in the first minutes by an Atlético who came out to the game in a dominating plan and was able to score soon in a counterattack finished by Correa, who ran into the good save of the Portuguese Rui Silva.

He replicated the home team with a shot from Jorge Molina, which Brazilian Felipe Monteiro cleared with one foot, and with a header from Germán Sánchez after a corner kick that was about to end in goal.

Despite the fact that Granada balanced the visiting initial dominance with higher pressure, the Uruguayan’s first two occasions arrived Luis Suarez, but in the first he narrowly sent a placed shot away and ran into the good save of Rui Silva in the second.

Equality was maintained in the final stretch of the first half, with the two teams canceling each other and being also unable to take advantage of his options from set pieces.

Atlético de Madrid, who left Frenchman Geoffrey Kondogbia in the locker room for the Croatian Sime Vrsaljko to enter at halftime, repeated the script for the first half in the second half, with a great staging exemplified in an acrobatic shot by Luis Suárez that repelled the crossbar of the local goal.

Granada responded with a very distant volley from the Cameroonian Yan Eteki that went off course, with a center-kick from the Venezuelan Darwin Machís that forced intervene for the first time in the match against the Slovenian Jan Oblak and with a bad shot from Jorge Molina, although he was in a good position to score.

The duel entered its last half hour with the teams looking from you to you, alternating control of the game and looking for ways to break the good defensive network of the rival.

The visitors almost achieved it in an elaborate set-piece action that Luis Suárez could not finish successfully when he seemed to have everything in his face to score.

Yes he did it in the 63rd minute Marcos Llorente, who reappeared to unbalance in favor of his own a party that was closed with a powerful left foot from the edge of the area that Rui Silva played but could not prevent it from becoming 0-1.

The reaction of the Andalusians was instantaneous, since just three minutes later Yangel Herrera, who had only been in the field for a few minutes, hunted an assist from Jorge Molina after a corner kick to sign the tie.

Atlético, who only made one change in the game, took the lead again in the 74th minute another action started by Marcos Llorente on the right wing that ended with a Correa shot that touched Vallejo to poison himself and become 1-2.

Granada went up in the final minutes to try, at least, to equalize the score again, although their resource of hanging balls in the area did not work and Atlético did not struggle in the epilogue to defend the three points that keep them as outstanding leader.