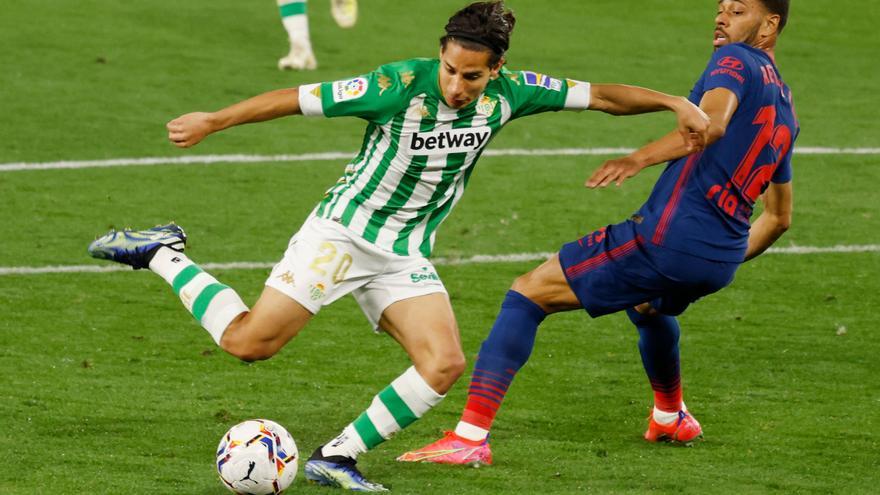 The Atletico Madrid scored a point (1-1) at the Benito Villamarín stadium in a gray match, where the best for his interests was the tie with which he maintains the leadership in LaLiga Santander in the absence of eight days, although the Betis got him in trouble with his desire to settle down in the European zone, in which he is now ranked fifth.

The Atlético had the problem of the casualties that it brought accentuated During the match with the injuries of the Portuguese Joao Félix and the English defender Kieran Trippier, inconveniences that he noticed a lot against a rival who in the second half exposed more.

A goal from Cristian Tello in the twentieth minute countered the one scored by Belgian Yannick Carrasco at the start of the match. The scoreboard no longer moved in a meeting in which it seemed that both were satisfied with the tie.

Like seven days ago at the Sánchez Pizjuán, andHe from Villamarín was another litmus test for Diego Simeone’s men, but now with even less margin for error after Real Madrid’s victory over Barcelona on Saturday, temporarily unseating Atlético from a leadership in which it had been installed for months.

For it, the Argentine coach had the Frenchman Thomas Lemar removed at the last minute due to discomfort on the back of the thigh, who joined the Uruguayan Luis Suárez, Marcos Llorente and the French Geoffrey Kondogbia, all three sanctioned, plus the also French Moussa Dembélé, who continues with individualized training due to the slight drop in tension that caused him to faint two weeks ago and half.

He was able to somewhat alleviate those absences with Belgian Yannick Carrasco, who already served a penalty game; the Portuguese Joao Félix, after two away games -sanction and injury-; and Montenegrin Stefan Savic, who did not play against Sevilla due to gastrointestinal problems.

In front of them, Betis also played their part in the fight to occupy European positions, and more after knowing previously the defeat of Villarreal at home against Osasuna and that Real Sociedad had not gone beyond the draw in the field of Valencia.

Chilean coach Manuel Pellegrini also had significant casualties, that of forward Borja Iglesias and Mexican midfielder Andrés Guardado, both injured, plus that of central Víctor Ruiz, who was sanctioned.

Pellegrini revolutionized his lineup, to which the center back Marc Bartra returned after several months injured and in which he did not use any specific striker as a starting point and did use band players such as Aitor Ruibal, Joaquín Sánchez and Cristian Tello.

The visiting team could not start better, because in the first approach, and after a great combination play, Carrasco had the coldness inside the small area to beat the Chilean goal Claudio Bravo with great solvency.

The goal came before the fifth minute was up and a new game began with Madrid’s advantage against a rival who found Atlético intense and who had a hard time overcoming, to the point that before The first quarter of an hour was fulfilled Saúl Ñíguez had a very clear to put the 0-2, but the goalkeeper of the Verdiblancos responded very well to his header.

Atlético and Betis forgave, in their first dangerous action, he found a good pass from Alex Moreno to Tello, who, as a false striker, skillfully finished off from the center of the area impossible for the Slovenian Jan Oblak.

That new tie gave the locals energy to press forward and force the visitors to play a lot and make plays but without the surprise factor of the start, with which the game entered balanced and with alternatives to the final stretch of the first period and to the rest, to which Joao Félix arrived injured due to a blow to the right ankle in the last play.

The Portuguese came out in the second to test himself but at the moment he fell to the ground to be replaced by the Uruguayan Lucas Torreira, with which Atlético increased its problems of lack of cash in a match that remained even, with respect between both contestants and waiting for one to make a mistake.

The first to try was the Brazilian side Emerson Royal with a header to which Oblak responded, but Betis saw some instability in the opponent and began to be more protagonist, even Pellegrini put Juanmi Jiménez to look for more gunpowder.

Simeone also moved the bench, with the entry Víctor Machín ‘Vitolo’ and the Brazilian Renan Lodi, to recompose the drawing and recover sensations but Betis did not leave him and even Aitor Ruibal and later his substitute, the Mexican Diego Lainez, enjoyed opportunities for 2-1 .

Despite everything, the Argentine Ángel Correa also had two in the extension, but Claudio Bravo was attentive so that the scoreboard did not move any more.

Incidents: Match of the thirtieth day of LaLiga Santander played at the Benito Villamarín stadium. No public due to the health protocol due to the covid-19 pandemic.

Celebrating the life of Unzué