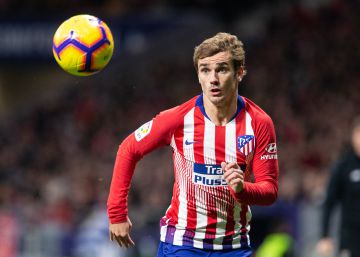 Atlético de Madrid charged this Friday with indignation and harshness against Barcelona and also against Griezmann. He considers the Atletico club to be disrespectful following the agreement reached, supposedly, last March by Barça and the French striker. Atletico explained through a statement that the player, in a meeting held on May 14 with the CEO Miguel Ángel Gil, coach Diego Pablo Simeone and sports director Andrea Berta, announced his decision to leave the club at the end of the season.

"In the days after that match," the statement said, "Atlético was aware that Barcelona and the player had reached an agreement last March, specifically in the days after the second leg of our playoff tie. Champions League against Juventus, as well as they had been negotiating the terms of the agreement since mid-February. "

The announcement of the Athletic one became public shortly after the press conference that Josep Maria Bartomeu offered in the Camp Nou. The president of Barcelona revealed that the executive director of the Catalan club, Óscar Grau, met "for the first time" on Thursday with Miguel Ángel Gil Marín to discuss the incorporation of Griezmann. "We are interested in the player," Bartomeu said. And he recalled that there have been more players who came to the club after Barça had not made the transfer, and cited Villa.

In his note, Atlético confirmed the meeting between Grau and Gil. He added that Grau expressed his intention "once the termination clause of the Griezmann contract has been modified and that it has gone from 200 to 120 million euros, request a postponement of the payment of the aforementioned amount of the clause in force as of 1 July". Miguel Ángel Gil's response was negative, "understanding that both Barcelona and the player have disrespected Atlético and all their fans." Atletico, as a result of all this, has required the player, his sister and agent and his lawyer, Griezmann, "in compliance with their contractual obligations, appear next Sunday," to start the preseason with his teammates.

Atletico, he concludes, expresses his most energetic rejection of the behavior of both, "especially Barcelona, ​​for having induced the player to break his contractual relationship with Atlético at a time of the season where the club was playing, not only the Champions League elimination against Juventus, but the League title against Barcelona itself, something that we consider to be in breach of protected periods of negotiation with players and alters the basic rules that govern the integrity of all sporting competitions, as well as being a huge prejudice to our club and its millions of fans. "

The baggage of Griezmann, of 28 years, in the Athletic one is of 256 parties, 129 goals and three titles: League Europe and Supercopa of Europe (2018) and Supercopa of Spain (2014). And also of long summers in which the jokes with his march brought him succulent salary increases. On June 15 of last year, the French forward announced that, after discarding an offer from Barcelona, ​​he would remain at Atlético through a program entitled The decision.