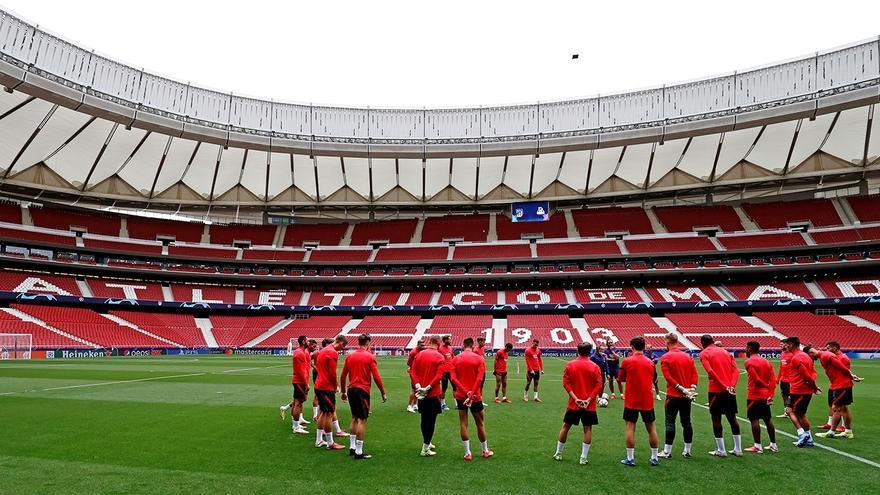 There is no competition that causes more sleeplessness when Atlético de Madrid that Champions League, the last limit, still insurmountable, for the team of Diego Simeone, provided this season with more resources than ever at your command to compete against your permanent doubt in that competition and tackle a still impossible challenge, which restarts this Wednesday to attack and without excuses in the Wanda Metropolitano against the intensity of Porto.

The three lost endings, Two with the Argentine coach, the last one in 2016, resonate with force every time the rojiblanco team takes up such an effort, even more so this season, when it has brought together a roster of players perhaps unmatched throughout the entire Simeone era, that they nominate him for much more than what he has done in the last four years in the tournament, in which he has not gone beyond the quarterfinals. He did it once. In another two he fell in the second round. In yet another he settled for the Europa League.

Nothing to do with that stretch between 2014 and 2017, when Atlético reached two finals and a few semifinals, although always with the cruel memory of the outcome of Lisbon, in 2014, in extra time, and Milan, in 2016, on penalties, that will be indelible until the team achieves what it is looking for: the first Champions League in its history that he has longed for since 1974, since he first touched glory.

“The road is walking. We know the competition and we know the difficulties that there will be due to the great balance of the group where we are going to compete,” said Simeone on Tuesday, whose team is facing an undoubted litmus test in the group stage against Liverpool, Milan and Porto, with which everything begins again for the rojiblanco group, invincible in this course, winner of three of its four matches of League.

Just the best game he played was the draw he conceded against him Villarreal (2-2); his last appearance at the Wanda Metropolitano. A strength of Atlético (only six defeats in 101 games there, with 71 wins, 24 draws, 178 goals in favor and 54 against) that also appears in the Champions: 14 duels, nine wins, four tied and a single loss.

Among the plebiscite of the fans (the allowed capacity is 40 percent) that awaits Antoine Griezmann, for his escape in 2019 to Barcelona, eleven is a mystery with all the resources available to Simeone, always faithful to a more or less typical line-up in previous seasons, although it did not have as much variety and level as it has now.

A change is certain in the starting team: it is low Stefan savic, who will serve the first of four suspension matches for last year’s expulsion against Chelsea, and returns Jose Maria Gimenez, who rested against Espanyol just arrived then from the meetings with his team. It is also expected in defense to Felipe Monteiro and Mario Hermoso, within the 5-3-2 scenario proposed by Simeone.

On the right wing, between the doubt of Kieran trippier due to a digestive problem, points out Marcos Llorente, whose possible transfer to the lane could reopen the door of ownership to Geoffrey kondogbia in the center of the field, next to Koke Resurrection and Thomas Lemar, the decisive scorer of the 1-2 against Espanyol last Sunday. The left would be for Yannick Carrasco, with the alternative of Renan Lodi.

And in attack? There are several options: Luis Suarez and Joao Félix; Luis Suárez and Antoine Griezmann or Luis Suárez y Correa. Even a forward without the Uruguayan scorer, although less likely. Or an attack with three of them, although the experience in the first half against Espanyol contradicts such a possibility.

Opposite, Porto arrives with all the gunpowder and the only casualty of the Argentine goalkeeper Marchesin, although the young Portuguese international Diogo Costa He has become the reference under the sticks this season, with great interventions in the League.

One of the great threats for the colchoneros will be the Colombian winger Luis Diaz, that during the league break was uncovered with the coffee team and that last Saturday he scored the equalizer in the classic against Sporting de Portugal.

In the core, another of the references will be the Colombian Uribe, which will be applied in defensive work.

After several years, the central Porto Pepe will face Atlético de Madrid again, with whom he starred in so many duels when he defended the shirt of the Real Madrid.

Another of the Spaniards who will act in the defensive part is the Cantabrian Iván Marcano, this year redirected towards the left side, a position he occupied in the beginning with the Racing de Santander.

The mattresses will have to be very attentive to the offensive line of three that, with a lot of probability, will place Sergio Conceiçao at Wanda, just like he did last Saturday against Sporting.

The Mexican Tecatito Corona, on the right, the Brazilian Otávio midfielder -which has just debuted with the absolute of Portugal- and the Colombian Luis Díaz on the left will be Porto’s offensive midfielders.

Above 9, the Iranian Mehdi Taremi, that last season he scored as a Chilean against Chelsea, which was considered the best goal in the Champions League.

In Porto’s retina, the last edition of the Champions League, in which they fell in the quarterfinals against the current defending champion, the Chelsea, the same one who got off the colchoneros in the second round.