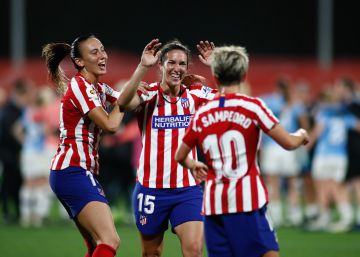 Luck is capricious and sometimes twisted. Atlético de Madrid will debut in the quarterfinals of the Women's Champions League against Barcelona in the first Spanish duel of the competition, after the draw held this Friday at the UEFA headquarters in Nyon, Switzerland. The winning team will face in the semifinal that is the winner of the crossing between Glasgow City and Wolfsburg. The first leg will be played in Madrid on March 24 or 25 and the return will be played in Barcelona on April 1 or 2.

Culés leave as favorites, after sweeping the Minsk in the eighths 5-0 in the first leg and 1-3 in the round. The Barca team faces their fifth tie followed by the quarterfinals and wants to redeem themselves from the defeat at the end of last season. Atlético, meanwhile, achieved a classification as historic as suffered against Manchester City that has opened the door to continue dreaming in Europe. In addition, the mattresses have the incentive to avenge the 6-1 that Barcelona endorsed on the third day of the league.

Only one of the two Spanish teams will be able to advance to the next phase, where the least desired rival is the Wolfsburg, one of the coconuts of the competition. The German team, champion in 2013 and 2014, is the second most successful team of the eight and the second most scorer of the current edition of the Champions League, with 22 goals in just four games.

What is certain is that the Spanish teams will avoid Olympique de Lyon, the great dominator of the competition, until the end of May 24 in Vienna. The French club is the current champion of the Champions, after winning Barça in the final of last May in Budapest (4-1). The Lyon are still one of the most fearsome teams in Europe, with six Champions Leagues in their medal winners (the last four in a row) and located at the head of the French league. Lyon also has the top scorer in the history of the Champions League with 53 goals, the Norwegian striker Ada Hagberg.