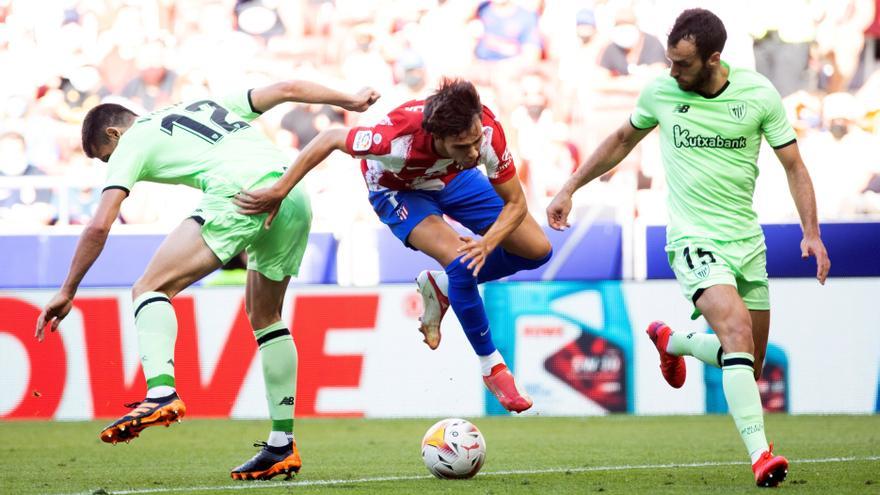 Neither him Atlético de Madrid neither him Athletic club are living up to their best expectations this season, below their conditions as current League champions and the Spain Supercup, respectively, faced with 5,000 kilometers of their successes for credibility, among the doubts that mark their results of the course and with the unknown whether Luis Suárez will start in the block of Diego Simeone.

Nothing puts such a situation more evident than the numbers, so compromising to analyze the moment of a team, without admissible nuances in the game. Not on missed occasions. Not in the maybe. There is no greater certainty for any team than to win. And neither Atlético nor Athletic Club win as they should, with more visibility in the case of the Madrid team, a League champion half a year ago and today 16 points from their lost throne.

Atlético has won only six of their most recent 17 official matches; the last one the tie with which he barely survived, at an overwhelming hour, one of the first worst parts that are remembered, at the Estadio de la Cerámica. The equalizer concealed the drift of a team that no longer finds itself with 27 games played, between uncertainty and the unsuccessful search for the system, the names and the mechanisms that best exploit the individual qualities of its players, now with Stefan Savic and Antoine Griezmann off. They are his only two absences due to injury for the Spanish Super Cup.

You need a reaction. Also a claim. The insistent relapse in which he moves this season demands a much more conclusive answer than he has given so far, unable to chain more than two wins in all this exercise, so estranged from the regularity and balance that so obsessed his coach. Never in a decade had he signed such low productivity. Never in this decade have I raised so many doubts.

Although the Super Cup is not a priority for Atlético (at least it was not at the beginning of the campaign), it is a stimulus to awaken the determination that a format like this requires and that the Madrid team yearns for in all its lines, in everything his team and, especially, in his defense, admired before and vulnerable now: Jan Oblak, away from his best courses and exposed as never before by his rear to rival damage, was only unbeaten in 5 of his last 20 games, with 27 goals in against in that frustrating journey.

An Athletic of ups and downs

Neither Athletic, the champion of the last Super Cup and two of the six most recent, is in its best campaign, within thes obvious ups and downs and draws -ten- they have lowered their position in the championship. He has only won three of his last thirteen games, one of them against Mancha Real in the Copa del Rey, although he concentrates those victories in his five most recent games. He is ninth in the League, today outside of Europe.

With the memory of his fabulous tournament last year, when lifted the trophy after beating the Real Madrid in the semifinals (1-2) and at Barcelona in the end, Athletic has traveled to Riyadh aware of the difficulty of repeating the feat but excited to do so.

To do this, it relies on the ability to compete against any rival that is demonstrating throughout the season, although without fully ratifying the results, and on how well 2022 has started, with two consecutive victories in Pamplona and in the Cup in Mancha Real (Jaén) and a draw in Vitoria to round off without losing the first week of the year.

The unknown in Atlético's eleven is Luis Suarez. Either him or Joao Felix. OR Cunha or Angel Correa. The second appear to be an advantage over the first to form in the starting lineup, according to the tests of the Argentine coach, who could also do without Rodrigo de Paul in the center of the field to recover Koke Resurrection, to give Geoffrey Kondogbia more travel in that line and to look to Thomas Lemar for inspiration.

Within the 5-3-2 to which, according to the tests, Simeone plans to return, Marcos Llorente will again act as right lane. The departure of Kieran Trippier to Newcastle has relocated him there as the first choice, although Atlético loses all its overflow, all its capacity for surprise, all its unchecked behind the defense and everything that the Madrid midfielder contributes in more focused positions. and advanced.

While a signing arrives (or not) in the January market for that position, that seems to be Llorente's natural habitat, just as the left lane is from last year for Yannick Carrasco, neither so daring nor so decisive nor so incisor for months.

Giménez returns to defense, sanctioned in Vila-Real and in command of the rear in Riyadh, among the doubts raised by Felipe Monteiro and Mario Hermoso, whom he will accompany in the rear, with Jan Oblak in goal.

In Athletic, the 0-0 in Mendizorroza left the bad news of the injury to Unai Vencedor, his guide in midfield. Vencedor, a boy who has just turned 21, is far from being one of the stars of the rojiblanca squad, but he has gradually become necessary to organize the team's game, support captain Iker Muniain in the construction and Dani García in the fold. An implied and bossy middle center of the whole life.

His loss reaches a greater dimension due to the lack of a player of his profile to replace him. It is not Oier Zarraga, an interior of deployment, driving and arrival; nor Mikel Vesga, a player from area to area but who has not quite achieved the speed and aggressiveness that the position demands. Although the two seem like the first options, it could be a surprise Peru Nolaskoain. More positional, powerful in disputes, and with a good passing game, Nolaskoain has reappeared at a good level after a year and a half without playing.

For the rest, there are hardly any doubts about the eleven that the Asturian coach will put up. If anything, those who occupy the positions of second forward and inside right in their non-negotiable 1-4-4-2. Raúl García and Oihan Sancet choose to accompany Iñaki Williams upstairs. And to go out in the band Alex Berenguer and Nico Williams.

Lazy final minutes against the youth's Alavés increase the veterans' chances, but Sancet and Nico have scored the last six goals for their team. Four the midfielder, one to Madrid and three in a hat trick to Osasuna; and two the winger, with a double against Atlético Mancha Real, rival cup-bearer of Second RFEF.

Those who have practically assured the position in the Bilbao eleven, in addition to Muniain and the eldest of the Williams, are Unai Simón, under the sticks; Oscar de Marcos, Yeray Álvarez, Íñigo Martínez and Mikel Balenziaga, in defense; and Dani García, in the double pivot.