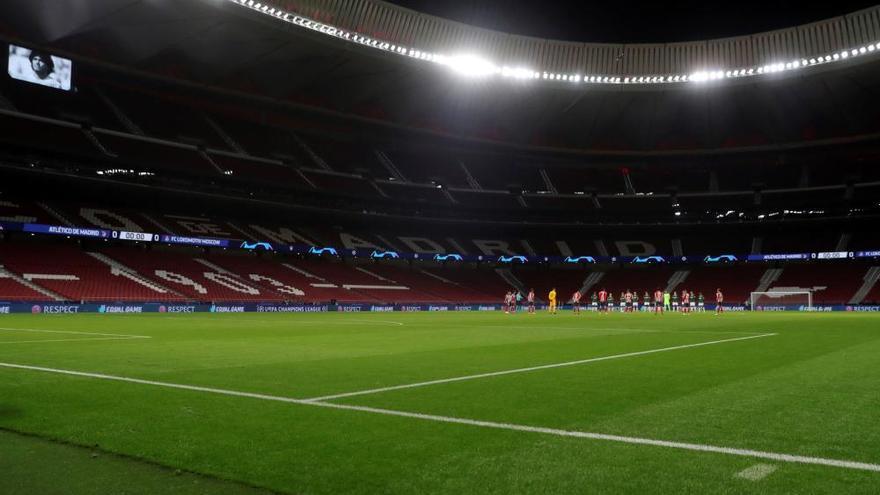 The Atlético de Madrid the pass to the round of 16 was complicated of the Champions League by drawing 0-0 at home against Russian Lokomotiv Moscow, in a monologue in which he lacked aim that forces him to score within a week against the European champion, German Bayern Munich.

As already happened to him in Moscow, there with an even better game than the one he played tonight in the Metropolitan, Atlético was unable to find the key to open the Russian lockDespite the initial 25 minutes of harassment in which Joao Félix had a clear chance as soon as he started, Llorente two, and one for Carrasco and Correa. All were covered by the Russian-Brazilian goalkeeper of Lokomotiv Guilherme.

Later, less fluid and a desperate point, he lost to a team that has already left him without four points, those that could have left him with the pass to the second round made and now force him to draw at Bayern – which he did, winning Austrian Salzburg – and win against Red Bull to access the next phase. Even more difficult and an unexpected panorama at the beginning of the course.

Without their star forwards, the Uruguayan Luis Suárez, isolated by coronavirus, and the Hispanic-Brazilian Diego Costa, by a “spontaneous deep vein thrombosis in the right leg” known on the morning of the match, Atlético could not take advantage of those first 25 minutes, and then it was rushed.

Winning was an obligation tonight for the rojiblanco team -which also did not have the Uruguayan Lucas Torreira due to coronavirus, nor the Mexican Héctor Herrera, the Croatian Sime Vrsaljko and Manu Sánchez due to injury, nor the French Geoffrey Kondogbia for not being registered-, and did not comply with a rival who profited the he waits sheltered at his doorman.

And that those of the Argentine Diego Simeone they were applied voraciously. From the beginning they were in a rush, with Joao Félix as conductor, but wrong in the free kick he had after 3 minutes from Llorente -then he would regret it a lot, knowing the subsequent events- and Ángel Correa as agitator.

The Argentine is sweet. His ability to turn and run into space is gold for this Athlete who plays closer to the rival area.l. From one of those he reached the baseline to center towards Carrasco, but his header took him out with the Rybus head. Then he received a break from Llorente and shot, but found Guilherme.

It would be but the first of many by the Russian-Brazilian goalkeeper, who was already a wall in Moscow and repeated in the first half of the Metropolitan: he took another shot from Llorente after a corner, a 20-meter from Carrasco and then tried it again the Madrilenian with his left foot. Everything was covered by the goal of ‘Loko’, despairing of Atlético, whose attempts after half an hour became imprecise.

Still, the dominance was undeniable. The Moscow team did not pressure their rival, they entrusted themselves to the virtues of their goal and the accumulation of players. With success in the first half, which ended by fulfilling the plan of not receiving, since at no time did he think of proposing, just two timid counterattacks before the break.

The situation did not improve after the interval, with only Guilherme struggling to take a long shot from Saúl, so Simeone opted to switch to the system of three centrals and long lanes in search of freeing Carrasco and generating more danger. But it was not the fluid Atlético of the first half hour.

The siege returned. Carrasco kicked a foul, the first attempt against the barrier, but in the second he surprised Guilherme who could not block and Koke took advantage of the rejection to score, but he had done it offside, as confirmed later by video refereeing. The cancellation a posteriori buried the rojiblancos spirits, and Simeone did not have more gunpowder on the bench than Camello.

But the rojiblanco team was already disheveled and desperate, which even allowed two Russian counterattacks, from the newly incorporated Rybchinskii and Magkeev, who did not hit the mark, and just wished that a final header from Giménez would see the door, but left on the side. The rojiblancos will have to go to the second round the hard way.

Incidents: match corresponding to the fourth day of Group A of the Champions League, played at the Wanda Metropolitano stadium without an audience.