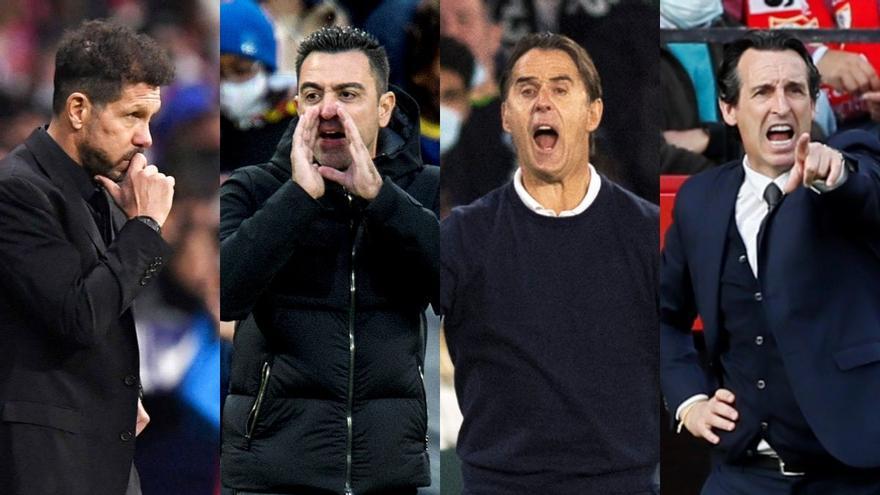 The Europa League conquered by him Villarreal before him Manchester United allowed Spain start the Champions League with five representatives, something that had only happened in 2015, with the Valencia instead the yellow submarine. In that edition, the Andalusians and the Levantines were left out in the group stage. In this grade, four out of five are in danger, one more sample of the decline of the Spanish League in comparison, especially, with the Premier, which already has its four teams in the next phase: Chelsea, Manchester City, United and Liverpool.

The Real Madrid It is the only Spanish club that has reached the last day with its homework done. He only has to complete the task: add a point at home against Inter to secure the top spot. ‘Pecata minuta’ if compared to the drama What awaits the rest, starting with the Atlético de Madrid, who will be the first to risk his life with his visit to Port of this Tuesday.

The loss at home to him Milan in the last round he has left the rojiblancos, finalists in 2014 and 2016, in a very delicate position. He does not even depend on himself to be in the eighths. They need win obligatorily in the Dragon stadium and that Milan did not win at San Siro Liverpool, which has the lead assured. «Words are useless, deeds are useful and I absolutely trust my team. I believe because I train with them, I know their character and I trust them “, released this Monday the Cholo Simeone in one of his classic motivational speeches.

“Words are useless, deeds are good. I believe in my team”

Nor would it be the first time that Atlético consumed a fiasco on the Champions. In December 2017 they were already out of the group stage when they finished third after drawing their two games against him. Qarabag. Chelsea and Roma passed the screen and the rojiblancos played a Europa League that they conquered against him Marseilles. On this occasion, the risk is even bigger, since they can finish last in the group and say goodbye to Europe.

Wednesday will arrive triple challenge for Barça, Seville and Villarreal. The azulgrana club does depend on itself, but it must consummate a feat: beat Bayern in Munich. If he does not succeed, he could go to the last 16 if the Dynamo of Kiev, already eliminated, is able to score in Lisbon before him Benfica.

Both options seem complicated. You just have to look at the scale of betting shops, who pay 4.20 the Catalan victory and 5.50 the draw of the Ukrainians in Lisbon. The German and Portuguese triumphs are trading at 1.65 and 1.30, respectively. You have to be very optimistic to believe in survival of Xavi’s team, what would happen to the Europa League if he finishes third.

The biggest uncertainty you live in group G, with four clubs with options classification, including the Seville, which has clear accounts: it is only classified if it wins in the field of Salzburg. It would even be first if he wins and the Lille falls into Wolfsburg. If the Andalusians, now third, fail in Austria, they could finish last, so they would not even play the Europa League, a competition they have won five times

🙌🏾🎶 Come on my #SevillaFC, I follow you everywhere I want to, we are going to go around the whole world 🌍🔜 #UCL. #Never give up #WeAreSevilla pic.twitter.com/CgenfvsQpH

Villarreal, finally, will also play the classification at home. With the United already classified, the team of Unai emery needs to a point in your visit to Atalanta to be in the draw on December 13. If they lose in Italy, they will be eliminated, which would be a sledgehammer in a season that is not being too convincing in the League either. The technician took great care of Gerard Moreno so that it reaches the final point against him Atalanta, which tied at La Cerámica (2-2).

The Champions League closes the group stage this week with 11 teams in search of the 5 vacancies for eighths. Calmer will be the already classified: Ajax, Bayern, Liverpool, United, City, Chelsea, Juventus, PSG, Sporting Lisbon, Inter and Real Madrid.