In 2019, the Copa del Rey A new format was launched, with single-game elimination rounds up to the semifinals that are played in the field of the lowest category team. The RFEF wanted to pave the way for the modest ones, who deposit their ambitions in the first rounds to put themselves in the showcase.

However, a club of First RFEF -the new category created below Second-, the Athletic Balearic Islands, has gone one step further, qualifying for the round of 16, where it will be measured this Sunday at 12.00 with the Valencia after eliminating two other First Division rivals: Getafe (5-0) and Celta (2-1).

Quests from lower level sets are always counted as a David versus Goliath. Squads that play in the mud and that put a trap on their playing fields, described as cages. Pride, illusion, combat… The terms almost always coincide.

But if you zoom in on the magnifying glass Athletic there is a team with a tactical board that has been key in their deed or an ambitious economic project, championed by the German hotel businessman Ingo Volckman, to be promoted to Second Division, where this team, founded in 1920, played four times, between the 1950s and 1960s.

To this is added a hobby that, unlike what happens with other similar clubs, does not contemplate double militancy to declare itself “100% Balearic” (so written, without tilde), on an island where the hegemony is RCD Majorca.

“There are no excuses, Atlético Baleares beat us well”, he sentenced in the press room Edward Coudet, Celta coach, after the defeat against Atlético Baleares in the round of 32. The Argentine did not resort to the classic incriminating speech and recognized the merits of the rival, who knew how to get ahead, endure the draw and finish the match against an opponent who unsuccessfully resorted to his highest standard, Iago Aspas. Not like that.

The keys to this elimination, such as the win in the previous round against Getafe, or the good progress of the team in the First RFEF, are in the notebook and in the head of Xavi Calm (Castellar del Valles, Barcelona, ​​1981).

A young coach, who has been growing in the bronze category of Spanish football, to which must be added an experience as second of pep clotet at birmingham. Barely nine months, but they have left a mark on their catalogue.

“Against Getafe we ​​knew how to take advantage of the expulsion they suffered and stayed close to their goal at all times. Against Celta we managed to defend the result emotionally”, he explained to THE NEWSPAPER OF SPAIN, newspaper that belongs to this group, Prensa Ibérica, the coach of the Balearic Islands, a profile far from heroics, turning his last name into his way of being: “I am a normal guy and that absolute normality cannot lead me to be histrionic in my idols . My main reference is Marcelino Garcia Toral (Athletic coach), I like his game and personality”.

This is also reflected in its blackboard, where the direct style. He explains that his approach is metamorphic: from a 4-4-2 with two points fixed to the system with three central defenders and two lanes -also with a duo at the top- that he arranged against Getafe.

It adapts to the rival and the situation, although always preserving verticality and bite while keeping their backs. “I’m looking for a style that is easily recognizable by the fans,” says the Balearic coach, who always has the sovereignty of the stands on his radar.

This idea was reinforced during the 2019/20 season, when he experienced football in the warmth of the fans of the birmingham in the Championship (second). “The pitches there are always full and when it’s game day, the whole day in the city revolves around what happens on the pitch. There is also recognition of merit. I won’t forget when we almost shouldered after lose 4-5 against Leeds”, he recalls.

Why did the British adventure end? For a personal matter, his parents fell seriously ill at the same time. “They are fine now -he clarifies-, but I had the responsibility that being an only child gives me”. He returned to form part of the coaching staff of jordi roger, with whom he had already made a good tandem in the Cornella Catalan, where he ended up being the first coach as his comrade’s successor. 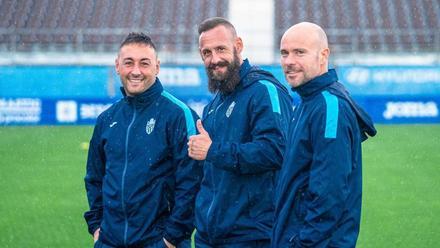 History repeated itself at the Baleares: in March of last year, Calm took over the reins and Roger became the technical secretary. The redistribution of posts worked. Both retained their independence from which the blue and white team secured their place in the newly created First RFEF, although not the long-awaited promotion to professional football.

In England he also learned to revere the magic of the Cup, which has been beneficial for the Balearic people in every way: “It has freed us from insecurities and has strengthened us in our fundamental objective, which is to reach the top in professional football”. For Calm, the tournament is a complement, far from the disdain shown by other coaches, who consider her a hindrance, especially after being eliminated.

From the very beginning, the Atlético Baleares squad has taken the tournament as a personal and collective claim, denying that being a professional is nothing more than military in the First and Second Division.

“It’s a great showcase. There are already three First Division teams that we have faced. The dynamics of this competition have shown that a rival from the First RFEF can harm any team. Dreaming is the fruit of work”, claims Ignasi Vilarrasa in statements to this newspaper.

East left side It is key in the story of the cup opera epic. He took the free kick that allowed Atlético Baleares to tie the first tie against Calahorra at the last moment. The shot was carried out by the goalkeeper Xavi Ginart, Balearic myth, and who even has a rock with his name. The classification was decided on penalties.

Vilarrasa is, like the rest of his teammates, making the fair and necessary journeys to play in the Cup against Valencia. The squad suffered covid-19 outbreak which led to the cancellation of the last league game. Only 12 players they have completed the training sessions of an atypical week, although the club hopes to recover troops for Sunday.

Rascals against the VAR

However, the blue and white defender remembers that in the win against Getafe a line-up of circumstances was already arranged, with him and his partner Ferrone, also lateral, forming in the center of the defense. “That match we came out with a line of three behind, two lanes who were actually extreme… But the group is so good that whoever comes out comes out, we compete like animals”, he aspires.

The best example that the Atlético Baleares project is aimed at professional football is its squad, where old rockers like Diony, a classic Second B killer, with a U-23 of enormous projection like Vilarrasa himself, who went through the quarry of Real Valladolid, of the Barca (partner of Araujo, Mingueza or Riqui Puig) or Cornellà, where he coincided with Xavi Calm.

“We have blind confidence in the project. It is a real roadmap to go up to the Second Division, ”says the footballer, assuming responsibility for the task. Hence, he sees the introduction of VAR in this round as positive, “so we are getting used to it,” he says, more seriously than jokingly.

Although he knows that both he and his teammates will have to change certain maneuvers: “In our category you can do some tricks. We must not play crooks and we must avoid making silly mistakes in plays that are likely to be reviewed”.

The triumphant advance in the Copa del Rey is a reward for the Balearic fans, accustomed to suffering. In the last ten years, the Athletic has played five promotion playoffs to Second Division with negative result.

“If only for statistics, this year it will be our turn! There is no team that has promoted more and with less success”, he tells this newspaper in a tragicomic tone. Miguel Angel Ferrer, president of the Penya Balearica Es Pla, vice president of the Federation of Peñas Atlético Baleares, former player and member of the veterans of the blue and white club. Balearic to the core.

The idea for this supporters club came up a couple of years ago while queuing to get tickets for a game that was going to be played at the Field of Son Malferit, where the club had to play ‘exiled’ for six years due to the abandonment of the Balearic Stadium.

“This was a tremendous kick. Our fiefdom was in the hands of the Procampo company, each shareholder had a part of it. Luckily we were able to return in September 2019”, says a fan who saw the fans cry on the way home, which has already planned a reform whose cost will assume Ingo Volckman, president of Atlético Baleares. 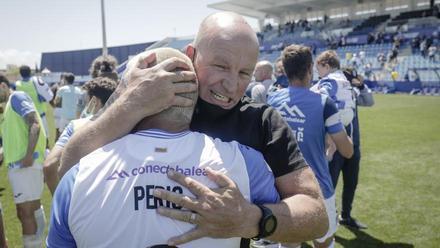 This German hotel entrepreneur took over the reins of the project in 2014 after the entity saved the dissolution ‘in extremis’. He had nothing to do with the club’s ecosystem, but he is a football lover. He is a fan of Hertha-Berlin and has even had a box at the Olympic. His way of living football is passionate, although without neglecting the numbers, and that is something that the suffering Blue and White social mass is grateful for.

“He is not a president dressed in a suit and silk tie. Is a ‘hooligans’ from head to toe, one more Balearic man who likes to be next to the stands”, describes Miguel Ángel Ferrer, who reproduces a recent conversation that the federation had with him: “He told us: ‘Look, this year I can only invest eight million euros, but I want to finish the reform of the field, something that I have not been able to do due to Covid, when I have money I will do it. It is outrageous what that means on the part of a German gentleman determined to go up to Second ”.

With this socio-economic project and good sports performance, the Balearic Islands fan’s chest swells more than ever to repeat, over and over again, that “I’m only from the Athletic, what else do you want it to be?”, as Ferrer insists, and that if you have to ask for a rival in the Cup, “let it be Mallorca, to ‘destroy’ it, on the green, inside our historic fort, the Balearic Stadium ”.