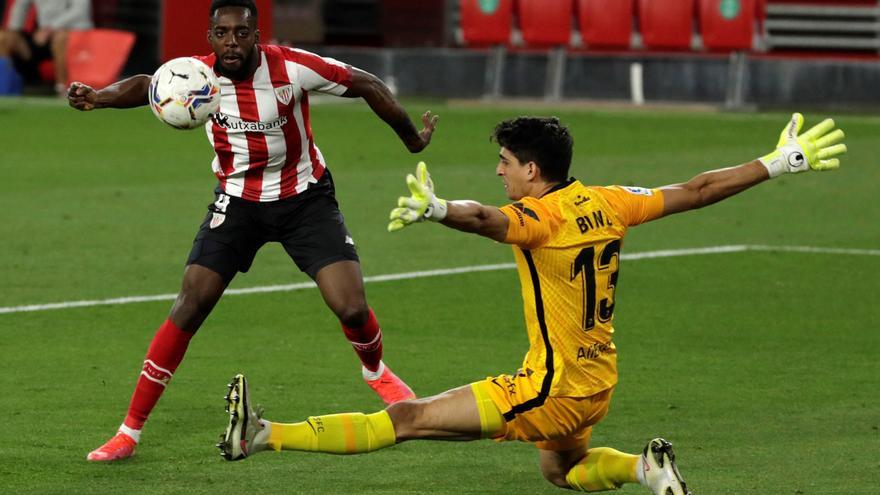 A goal from Iñaki Williams at minute ninety0-1) froze Sevilla’s illusions in his fight for the LaLiga title, in a match in which he had chances to solve it but in which he ran into goalkeeper Unai Simón and his own anxiety, while Athletic Club, with this victory, still has options to achieve a European position.

Sevilla was the dominator of the match in its two halves but it did not have the success to put him face to face with an Athletic that defended very well and that took advantage of the adversary’s needs to sink him without time for reaction, with what now the options to climb positions of the Hispanics, who visit the next day at the Real Madrid, they are diluted.

Julen Lopetegui’s team was presented to this match after the previous one, with the victory against Granada (2-1), mathematically secured fourth place in the standings and repeating one more campaign in the Champions League, but now with the illusion of giving war to Atlético de Madrid, Real Madrid and Barcelona in the fight for the title.

Without pressure, but with the enthusiasm that he has raised in this new challenge, the sevillistas closed the thirty-fourth day knowing that their rivals had won and that it was necessary to add a new victory to accumulate the five in a row that they had already signed and not lose. the thread.

Lopetegui, finally, kept French central Jules Koundé in the team despite the fact that in recent days he has not worked at the same pace as his teammates, and repeated in midfield with the Croatian Iván Rakitic and the Argentine Alejandro ‘Papu’ Gómez but without Joan Jordán for the second consecutive day.

Before they showed up an Athletic with many casualties, two of them last minute, because the international center-back Íñigo Martínez traveled to Seville but a contusion on his right shoulder prevented him from registering for the game, with which he joined midfielder Dani García, who was confined at home for being close contact of a family member positive for covid-19, and the injured Iker Muniain, Yuri Berchiche, Ander Capa, Peru Nolaskoain and Oier Zarraga.

With few options to reengage in the fight for European positions, those of Marcelino García Toral, who visited the Andalusian capital for the sixth time this season – two visits to Villamarín to face Betis (Cup and League) and three to La Cartuja (final of the Spanish Super Cup and the two finals of the Copa del Rey) – premiered this year at the Sánchez Pizjuán with the desire to compete and give good feelings.

Sevilla was the one who commanded from the beginning and eight minutes later they enjoyed the first approach with a center from Suso Fernández who was forced but endangered by the Argentine Lucas Ocampos, although Athletic put their lines together a lot to make it difficult for the rival.

The Biscayan team, in the first sets of the game, increased its chapter of injuries, because Raúl García, who returned to the title after three substitute games, complained about the right twin before the first quarter of an hour was up and he had to be replaced by Oihan Sancet.

He was followed by the Hispanics, as in a volley that was too crossed for Rakitic or with a great header from Moroccan striker Youssef En-Nesyri, after the Argentine side Marcos Acuña’s center, to whom he responded with an international stoppage Unai Simón.

The continuous attempts of Lopetegui’s men to open the scoring also led Marcelino’s team to react so as not to be so harassed and to look for counterattacks to make Moroccan goalkeeper Yassine Bono work, which resulted in the match being equalized in the final stretch of the first half.

In this dynamic, En-Nesyri reappeared, now with a strong and low shot from within the area, and also Unai Simón again to avoid Sevilla’s first with a two-time stoppage that brought the game to halftime with the initial draw.

In the second half the script began similarly, with the locals wanting to find that way to overcome the rival defense and the visitors without giving up those spaces that they found to create danger, as demonstrated in a crossed shot by Asier Villalibre.

As the minutes passed, Sevilla accelerated their game, sought the deepening at both ends, alternated with triangulations in the center and with the participation of the Dutchman Luuk de Jong in the lead.

But the precipitation weighed against a well planted Athletic in the defensive missions and that he also wanted to take advantage of the possible desperation of the adversary to surprise him with the Williams brothers (Iñaki and Nico) in the lead.

Thus entered the meeting in its last minutes, with the Sevilla players risking total harassment for that goal that they resisted despite the fact that he put more artillery in the field with Óscar Rodríguez and Óliver Torres, but that motivated a lethal Athletic counter that ended Iñaki Williams with 0-1 in the ninety minute that was final.

Incidents: Match that closed the thirty-fourth day of LaLiga Santander played at the Ramón Sánchez Pizjuán stadium. No audience.