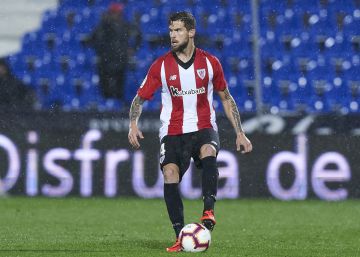 As in the old days, when the lineups were sung in a row, in San Mamés, except force majeure, fans of Athletic They know that the first five names that appear in the headline relationship are always the same: Unai Simón in the goal; and in defense: Capa, Yeray, Iñigo Martínez and Yuri, three Biscayans, a Guipuzcoan and the goalkeeper, Alavés.

The first need of Gaizka Garitano when he arrived at Athletic in December 2018, was to reinforce the line that seemed weaker in the team. He has succeeded. Since debuting in LaLiga, Athletic has conceded 31 goals, less than 0.8 per game. In the current campaign, only two teams in the most powerful European leagues have better defensive arguments: the PSG and the Stade de Reims in France. They have conceded eight goals, one less than Athletic. In England, Leicester is the only team that matches Athletic numbers. According to the rojiblanco statistician Adurizpedia, the last time the Bilbao team conceded nine goals in 15 days was in 1969, with Iribar in the goal. That season, Athletic finished second. Unai Simón is the leader of the Zamora trophy, with a 0.57 coefficient, 0.67 of Oblak and 0.73 of Courtois. Since 1949, the Basque team was not the least thrashed at this point in the championship.

The rojiblanca defense is immovable. The other central, Unai Núñez, which has already been international with Spain does not even have a place in the lineup. Iñigo Martínez, who arrived after the payment of the 32 million termination clause to Real Sociedad after Laporte left in the winter of 2018, is making the investment more profitable. He has become one of the team leaders, has not stopped coming to the national team, except for injury, and is a candidate to play the European Championship. Beside him, Yeray, who had to convalesce from testicular cancer for two long periods, is also performing at a high level. Like Yuri, raised in Lezama, who arrived two seasons ago from the PSG for 12 million euros, and who is at his best. On Sunday he joined the payroll of scorers against Granada. Ander Capa also premiered in the previous match at San Mamés. "I had not seen him mark even in training," Garitano was surprised. The right-handed, Vizcaino side, arrived from Eibar for three million euros, is also, after Leo Messi, one of the championship's top assistants with four goal passes.

Athletic does not dazzle for its game, but the statistics sing: after the first 38 games of Garitano, an entire League (14 of this season and 24 of the previous one), Athletic would be fourth in a virtual classification, behind the Barcelona, ​​Real Madrid and Atlético.

It is the defense, but also the center of the field responds defensively. Dani García is the midfield player, along with Unai López, with a more creative profile, who, curiously, played his first full game in San Mamés against Granada and gave Yuri a prodigious goal assist. Of the men of attack, Córdoba sacrifices itself in defense and perhaps that is why it does not shine so much in attack. He has not scored more than one goal in 77 games in First, but he is still a starter, because his coach values ​​other aspects. Those who have led Athletic to be a defensive wall and have added 13 points from the last 15.