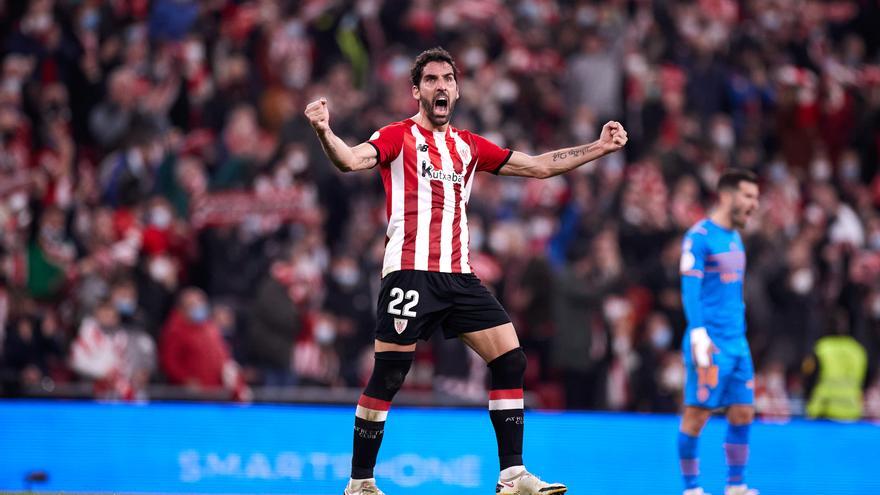 Raúl opened the scoring in the first half, in the 37th minute, finishing at the second post a free kick perfectly thrown by Iker Muniain, who had fouled him; Hugo Duro equalized in the second half, in minute 65, picking up the rejection of Julen Agirrezabala's save to a first shot by Bryan Gil in a great center from the right by Gonzalo Guedes.

The game started with a continuous give and take in football that was transferred to the so-called 'other football' until the end of the first part with a tangana threat as the players went to the changing rooms. In that bustle, in the tunnel, Maxi Gómez was expelled.

In the game, perhaps Valencia started better, finding Bryan Gil several times, a couple of blunt shots from Hugo Duro and even a ride from Guedes.

Athletic also responded, especially on the right wing, although somewhat thick until it found a moment to hold on to. And that moment came in the 19th minute with a transfer from Diakhaby to Mamardashvili in which the Georgian goalkeeper failed and almost cost him a goal.

As a result of that play, Athletic improved, already in the last quarter of an hour of the first half they threw everything towards the rival goal, many times in the set pieces that they generated.

They warned in two of them Íñigo Martínez and Yuri Berchiche and Williams he demanded with a hard shot to the near post.

The match leaned towards Mamardashvili's goal and Athletic took advantage of another strategic move. Muniain bounced, with the mastery he is used to in recent times, a foul that had been done to himself, and Raúl García finished it off at the far post, getting ahead of his marker. The VAR reviewed the action and validated it as Raúl was enabled by centimeters by the visiting defense.

With the shock then already heating up, Dani García missed a shot from the edgeheeled to the right, with time and space to hook it well.

After the tangana and the rest, the shock returned to where it was, already something rough on the grass, but hardly any chances. The clearest, a one-on-one match between Williams and Mamardashvili in which the Georgian goalkeeper prevailed, although he was called offside.

But Valencia wanted a tie, they looked for it first with an extension in the area by Foulquier at the near post and found it in a center by Guedes. The Portuguese centered on Bryan Gil, Agirrezabala repelled as he could in a great save and Hugo Duro caught the rebound in the small area to equalize.

From there to the end not much was played, Diakhaby had a good opportunity in the crazy area, Berenguer in the visitor and a fall by Hugo Duro against Vivian had San Mamés on edge for a moment.

A last cross from Muniain, taking advantage of a slip by a rival, did not reach Villalibre at the far post and that was where the last local options went in a match that was, in any case, even.

Referee: José Luis Munuera Montero (Andalusian Committee). He sent off Maxi Gómez, a player who was a substitute, in the locker room tunnel after the end of the first half. In addition, he showed a yellow card to the locals Dani García (m.63), and to the visitors Foulquier (m.43), Dyakhaby (m.79) and Hugo Duro (m.90).

Incidents: First leg of the Copa del Rey semifinals, played in San Mamés before 42,906 spectators, practically the maximum allowed by health restrictions. Before the match, Athletic paid tribute to Erika Vázquez, who on Wednesday broke the record for games played as a player for the Bilbao women's team, with a total of 414. Erika is also the club's all-time top scorer, with 263.