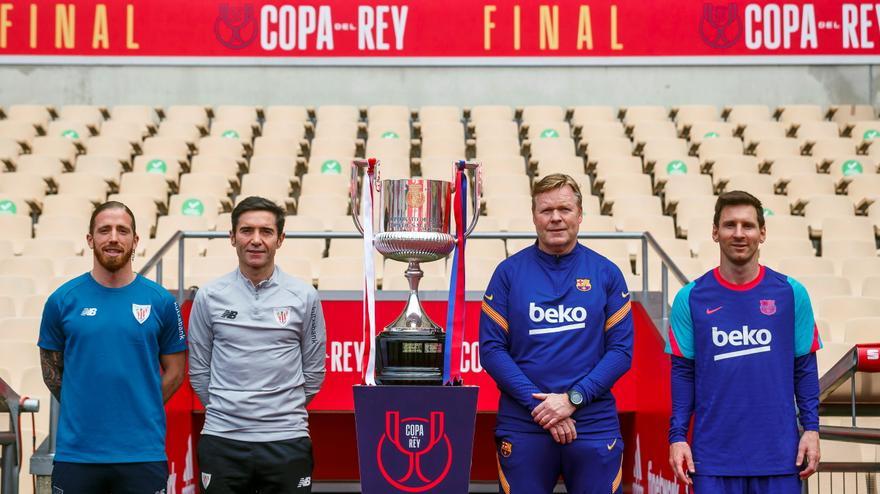 Athletic Club-Barcelona, which this Saturday (9:30 p.m.) will settle a new title of the Copa del Rey in La Cartuja de Sevilla, it will mean another duel in the tournament between the two clubs with the most trophies won and the only ones throughout the history of the competition that have come to be considered ‘King of Cups’.

If the Basque team had always been considered this way, the Barça streak in recent decades, where it has also won the last four finals that it has played against the Biscayan, has allowed Barça to be already widely the first in the competition (30 titles vs 23).

The Catalan team arrives at the cup meeting ready to get the first title of the Koeman era, with the outcome of The league yet to be decided.

The Catalans aspire to a double that, in the first place, happens by defeating Athletic this Saturday, and thus avenging the defeat that the Bilbao team inflicted on them in the final of the Spain Supercup (2-3), held this January on the same stage.

For the expedition to Seville, Koeman has summoned 26 footballers, including forward Ansu Fati and goalkeeper Norberto Murara, who travel with the rest of the team without yet having a medical discharge for their respective meniscus and ankle injuries.

For his part, Philippe Coutinho, who is also injured, will be the only player from the first team not to attend the final. The footballer traveled to Brazil two weeks ago to be operated on for a meniscal cyst in his left knee.

Heading into the game, Koeman still has doubts about the state of Gerard Piqué. The Catalan central defender returned to training with the group last week after injuring his right knee in the semifinal Cup against Sevilla, played in early March.

Even so, Piqué did not play any minute of the El Clásico last Saturday and, against Athletic, Koeman could choose to put him back on the bench.

In this way, Ronald Araujo and Clement Lenglet would be the two defenders who will occupy the defensive axis if he finally decides to do without the 3-5-2 and recover the defense of four. Otherwise, Óscar Mingueza would be the third center-back, accompanied by Sergiño Dest and Jordi Alba on the sides.

In that possible 4-3-3, in the center of the field will be the usual Sergio Busquets, Frenkie de Jong and Pedri Gonzálezwhile up front Antoine Griezmann would regain ownership to accompany Ousmane Dembélé and Leo on the trident Messi.

For its part, Athletic faces the game still depressed by the defeat in the final two weeks ago against the Real society (0-1), the Basque derby that the champion of the previous year was to determine and that was delayed to this by the pandemic and to be played with the public. Something that could not be either.

A team that dreamed of a historic and unprecedented triplet has not yet recovered from the psychological blow and which, after being hit in a rivalry clash that struck almost euphoric, It seems that this course with three finals and at least one title may be disappointing.

To avoid that feeling, which will surely disappear over time, the team of Marcelino Garcia Toral He has the opportunity tomorrow: a new final against Barcelona.

Marcelino has had to focus his work on the mental reset of his players, far removed from the January version in a final against Real for which he is probably still pondering answers.

However, for this second final in fifteen days what is expected is that the Asturian coach, if he can, repeat a good part of his starting eleven, if not whole.

The doubts focus on the multiplayer fitness and in the final decision on a double pivot for which he does not have two clear starters.

As for the physical, two fixed in defense as Yeray Álvarez and Yuri Berchiche They arrive fair but it seems that they have recovered from the muscular overloads they suffered nine days ago at the Reale Arena in the league repetition of the final in San Sebastian.

If they do not play, it is also clear that they will be relieved Unai Nuñez and Mikel Balenziaga, their natural substitutes. Balenziaga already started in the two Super Cup games and Nuñez in the semifinals against him Real Madrid.

The last setback that happened to Athletic centers on Muniain, who is seen limping in a viral video on the occasion of the Bilbao arrival in Seville. The captain has lowered his performance a lot in recent weeks, always giving the feeling of not being in peak physical condition.

If you can’t count on Muniain, it is possible that Alex Berenguer I changed bands to the left, Oscar de Marcos went ahead to the right inside and Ander Capa regained his position on the side lately for the second captain of the team.

Already in the double pivot, still being an unknown, to Dani Garcia, from your experience, you are presumed with more options. Unai Vencedor, his companion in the Super Cup and also in the final against Real, Mikel Vesga and Unai López choose to accompany him.

They are fixed Unai Simon under sticks, Íñigo Martínez commanding the defense and the couple Raúl García and Iñaki Williams in an attack that if it presents a novelty would be that of Asier Villalibre, scorer and even talisman coming off the bench.

The extraordinary performance of the goalkeepers prevents goals in Arona