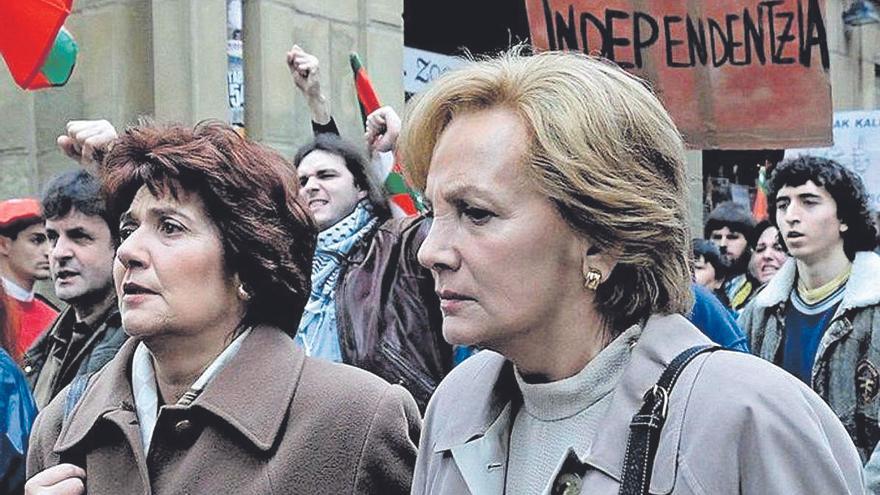 The terrifying phrases sink to the hilt in gall. The first, written in the hand of a mother visiting her son in prison: was it you? The second, shot point-blank by a human beast that uses the telephone to poke around the wound of a son whose father has been executed in cold blood: “Txato, fuck you.” They are two revealing moments (cruel, precise, sharp) that set the tone of ‘Homelands: compelling as drama splintered into multiple stories and flawless in its visual crystallization.

Very well performed, especially by Elena Irureta and Ane Gabarain, those two women who look at each other without seeing each other at night, one behind a shadowed window, the other standing on a sidewalk: separated by a geranium that is provocative and rebellious. There are victims and there are executioners.

The series is relentless in that regard, even if an unfortunate promotional poster would lead to misunderstandings.

Some pulled the trigger from behind and they did not care that the back of the neck in the spotlight was that of an innocent, who had previously made life impossible with blackmail, threats, harassment. But the series, like the novel, is not limited only to pointing out the culprits, errors and horrors.

It is clear and only fanaticism can cloud the judgment. Your journey into the bowels of monstrosity is an odyssey through the quicksand of pain under a rain of tears that makes every street a shroud, those endless tears that cannot clean the blood shed in the damn name of rotten ideals.

Leaden skies, leaden days: the last coffee, the last gestures before going out into the street, where a murderer awaits cocked. In Homeland, widows talk with their buried husbandsThe news broadcasts show that 864 dead are late (ETA stops killing), the mothers of the criminals defend them because they are mothers, and the priest shows more understanding for the terrorist’s family than for the victim’s.

The flashbacks show flashes of barbarism in the streets, bullies of thugs erect for carrying Molotov cocktails in hand and who stand up to their overwhelmed parents. And the families, of some and of others, are broken into a thousand pieces between thousands of gagged mouths.

Yes, Patria begins well with those drifting marriage scenes, with the amazement of the brothers who do not understand the armed and heartless struggle, with the complicit silence of a people that hides while the rain cries blood.