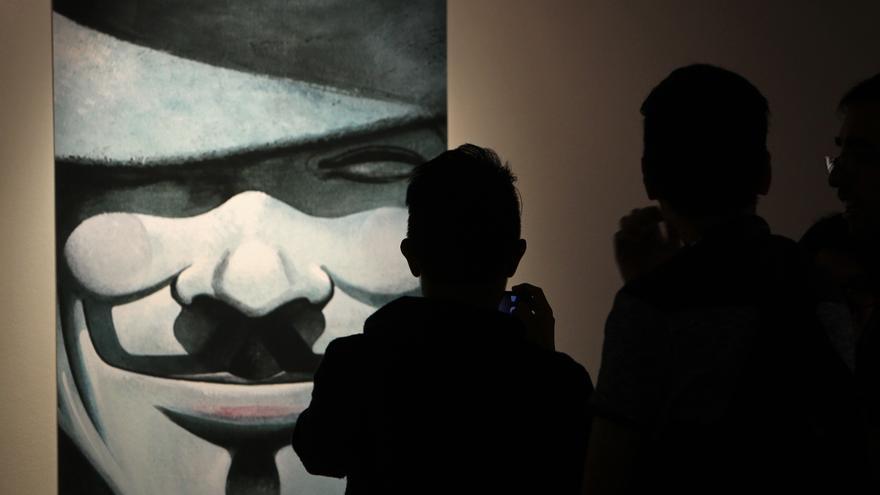 Madrid, Jan 7 (EFE) .- After the assault on the Capitol by thousands of followers of the still president Donald Trump, when Congress was preparing to certify the victory of the Democratic candidate Joe Biden, Efe reviews some films and a series that have reflected riots popular and attempted assaults on power.

After "The Strike" (1925) or "The Battleship Potemkin" (1926), the Russian director Sergei M. Eisenstein premiered "October" (1927), a silent film that, using his mastery in montage, portrays in a dizzying way the start of the Russian Revolution, the fall of the Tsarist government and the taking of the Winter Palace.

A shot of the Winter Palace in which, through very elaborate sequences, the viewer witnesses how a horde of exalted people with a thirst to overthrow tyrannical power cross a stratospheric door to finally access the building, amid cries of ecstasy.

Revolutions instigated by a mysterious masked man in "V for Vendetta", the adaptation of the DC comic that moves to a Britain controlled by a fascist government, with a young Evely (Natalie Portman) erected by the dark "V" as his collaborator to restore freedom to the country.

A film inspired by anarchist values, with a discontented and uncontrollable society, in which every night the curfew reigns and the masses of revolutionaries gather, wearing their masks, to assault the power that keeps them captive based on all a rhetoric of horror reminiscent of the worst totalitarian regimes in history.

In the action tape "Target: The White House", Antoine Fuqua, director of films like "Training Day" (2001), imagines an agonizing situation, with the president of the United States as the only living member of the Executive after a fatal accident and a command of North Korean terrorists attacking the White House.

An extreme situation that a fierce Secret Service agent, Mike Banning (Gerard Butler), will have to face, involved in countless sequences of action that aim to free the headquarters of the United States Government from foreign assault.

The same year "Assault on Power" was released, a film directed by the destructive film expert Roland Emmerich, with Jamie Foxx as President of the United States and Channing Tatum as Capitol policeman who will have to evict the insurgents who have managed to assault power , causing chaos throughout the nation.

Another pure action film with a Tatum that inevitably recalls John McClane from "Die Hard" (John McTiernan, 1988), and with a greater emotional or tearful presence, as the policeman, while trying to save his country, You should also prevent your daughter from being injured.

In the field of documentary highlights "The uprising", a tape made entirely with a mobile phone, which portrays the revolutionary attempts that were unleashed after the Arab Spring in Tunisia, Egypt, Libya, Bahrain, Syria and Yemen, in a single week of filming.

A historical portrait that was possible thanks to the collaboration of the citizens present in the demonstrations and protests, authors of the videos that make up this testimony of the revolution seen from the very heart.

Also in the documentary field is "Winter on fire", an Oscar-nominated film that recounts the founding of a new movement in defense of civil rights in Ukraine, after a series of controversial decisions taken by the Ukrainian government, on trade .

A documentary glued to the events, which reflects how the protests began peacefully and later turned into a violent movement with almost a million people demonstrating and trying to access the decision-making centers, to which the forces of order responded with extreme violence.

A phenomenon at the box office and at festival time was "Joker", a very real and terrifying version of Batman's famous enemy with Joaquin Phoenix playing Arthur Fleck, a clown abandoned by the system and with serious mental problems that discontent social rise to the category of leader.

A deep and stark portrait that contains sequences full of subtext, with a very intense final part in which the people of Gotham rise up against the established power, instigating a violent revolt in which the masks with the face of Arthur Fleck guide the actions of the thousands of protesters.

And in the field of television, it is worth highlighting the Netflix series "Designated Successor", with Kiefer Sutherland stepping into the shoes of Tom Kirkman, a member without many responsibilities of the US Government who, overnight, becomes the president of the country after a terrorist attack that ends the life of his predecessor and all his potential substitutes.

Series that uses a powerful premise to develop a post-destruction story in which the Kirkman administration will have to rebuild a Capitol in flames and a whole country in shock after the brutal siege of representatives of power popular.