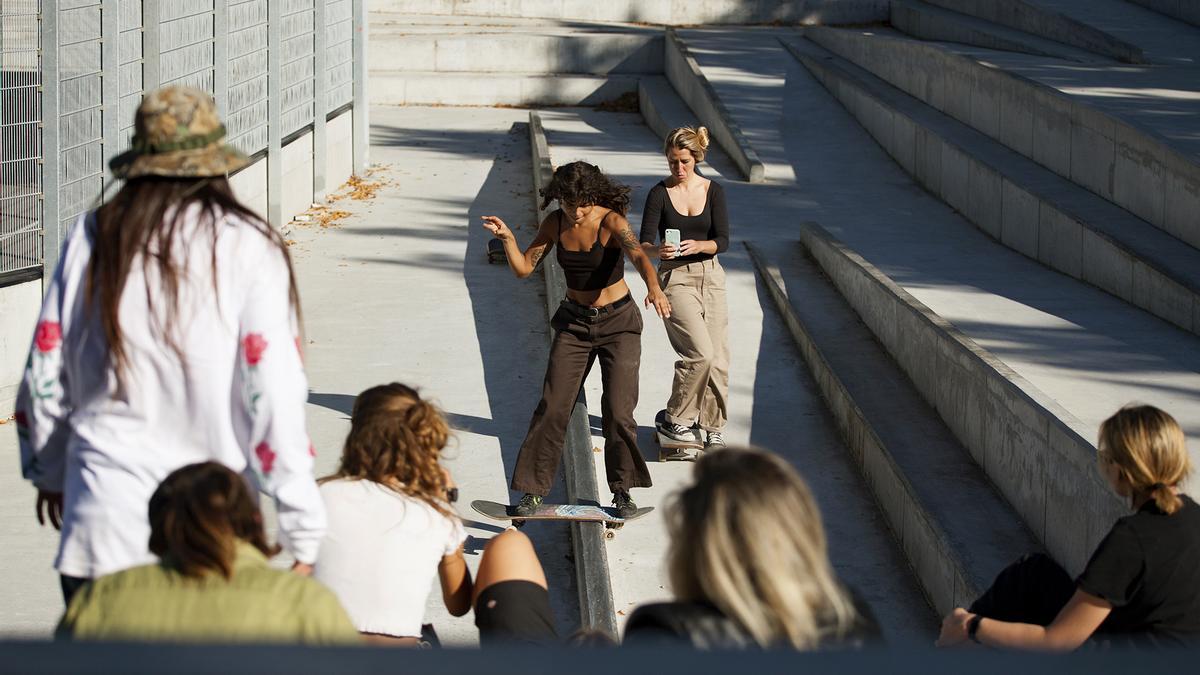 For someone who skates, it is normal to have a body full of cuts and scratches. Public space and urban furniture change their perception to be all "skateable". Footwear reduces its useful life to a few months as it slides through the sandpaper and new colloquial terms are coined in the language such as iron (fall on top of the board) or get excited (get motivated). This happens regardless of the gender of the skater, but in groups like so ironed they think that it is not always valued the same if the one who lives it is a woman.

This female skate collective founded in 2009 seeks to make visible the work of women in the world of skateboarding. They've made it through Dolores Magazine a pioneering women's skateboarding magazine in Europe that has celebrated three years since its first issue this week.

Seeing the amount of graphic material they had, Raisa Abal and Verónica Trillo decided to self-finance the first issue of the magazine. "Everyone told us: 'What great photos!'

There have been girls skating in Spain since at least the 1990s. "The problem is that they were not given the relevant recognition and visibility," says Verónica Trillo, a member of the World Skate gender equality commission. The skater remembers that she founded this skate collective with the idea of ​​"creating events, tours feminine, actions to dynamize the scene and, in short, encourage more girls not to have complexes to get on top of a table".

Regarding the name of the group, Asíplanchaba, Trillo explains that its origin "comes from the unfortunate song from Los Payasos de la Tele" to which they give a new meaning, since in the world of skateboarding "to land a trick is to do it with great forcefulness and precision". "We turn an archaic form around to give it a positive meaning , that of something that amuses us as women", she points out. "Today we like to think of Asíplanchaba as a community, a place where all the girls have a space to express themselves and find references and inspirations".

All the skaters interviewed claim to have had to live situations or comments out of place while practicing this sport. Specifically, that "you're never going to skate like a boy." "There have been guys who advised me to quit long before I started skating, when I was just trying to get on the board. At 22 years old! As if they were someone I should listen to," criticizes Raisa Abal. "Many girls do tricks that other boys don't. It's not something that depends on gender," highlights the Portuguese Leticia Nogueira, who has lived in Barcelona since 2015.

for her too photographer Raisa Abal there is a problem of parity in the way of representing women. "I can't understand why long videos and skate projects are still being created in which there is no female representation, because naturally all humans – be they men, women, or none of the above – relate to each other," she claims.

For this reason, a women's magazine like Dolores Magazine was needed in the skate scene. In those of traditional skateboarding magazines "maybe in 70 or 80 pages you find one or two girls," says Abal. "Dolores is not intended to be exclusive or a protest, but rather a gap that has been filled," explains Verónica Trillo, founder of Asíplanchaba.

All the girls emphasize the importance of having references. There are examples, such as Leticia Bufoni, the viral Rayssa Loyal or the Spanish Olympic Andrea Benitez, who serve as an example for other girls due to their high level on top of the table. "It's great that there are more and more," Nogueira stresses.

"Making visibility of women's skateboarding was my main objective when I decided to go to the Olympic Games," Benítez herself tells this newspaper. "I hope it has also served for public bodies to build more facilities to practice," claims this young woman who in 2021 became the first woman in history to participate in a Games in skateboarding. She, who has been skating for more than 17 years, regrets not having had better places to skate when she started.

However, the competition is outside of what is considered "the essence" of skateboarding. "The important thing is that diversity, that way of expressing themselves and the personal style of each one with their board. From the outside it seems not, but it is something that is within the reach of almost everyone", explains Verónica Trillo.

"Although the inclusion of the Olympic Games is good for skateboarding to begin to be taken into account at a social level, that competitiveness does not represent 100% what skateboarding is," says Leticia Noguer. For the skater, although skateboarding is an individual discipline, "the connections you make with people are unique. Skating with people is always more fun."

Asíplanchaba was born to "create a safe space". Because, according to Leticia Nogueira, "although skateboarding is a subversive culture, it does not escape the machismo that exists in society." "Here there are abuses and undervaluations just like anywhere else," underlines Raisa Abal, adding that "this happens from here to the United States."

"Even though we all skate with boys too, we needed a way to feel comfortable and united," continues Abal. "If you tell me when I first got on a board that five years later I was going to be skating with 10 girls on the same spot I wouldn't believe it", she admits. In addition, for Verónica Trillo, "the girls support each other much more, less rivalry and more sorority are perceived". "When I am about to do a trick, having the support of all of them manages to give me that plus of self-confidence," says Nogueira.

The skateboarders They point out that the lack of motivation they had before they started skating, they don't have now when they get together, "even reinforcing your own self-esteem," Nogueira points out. In this sense, giving visibility through social networks is considered something of vital importance. "If you are 14 years old and on the networks you see that there are girls who get together to skate and that for them it is something natural, references are created to know that there are girls who skate. You feel more identified", argues Raisa.

"The best thing is to see more and more girls in the skateparks," says Trillo. "In the group they have been holding events and gatherings of girls skateboarders for years and the difference is beginning to be noticed", points out Andrea Benítez. "It is also important that all skater emerging group has a good group of colleagues and friends who support her", emphasizes the Olympian.

Under this task of normalization, Raisa points out that "there have always been women, but they were not given visibility." In the words of Leticia Nogueira, "skating must be increasingly inclusive, freer and with more love, also with trans and LGTBIQ+ people, which I think is happening little by little." Therefore, "in pains we want more countries, cultures, languages, customs, voices and colors to be reflected. Things that go hand in hand with what skateboarding is for us", concludes Verónica Trillo.