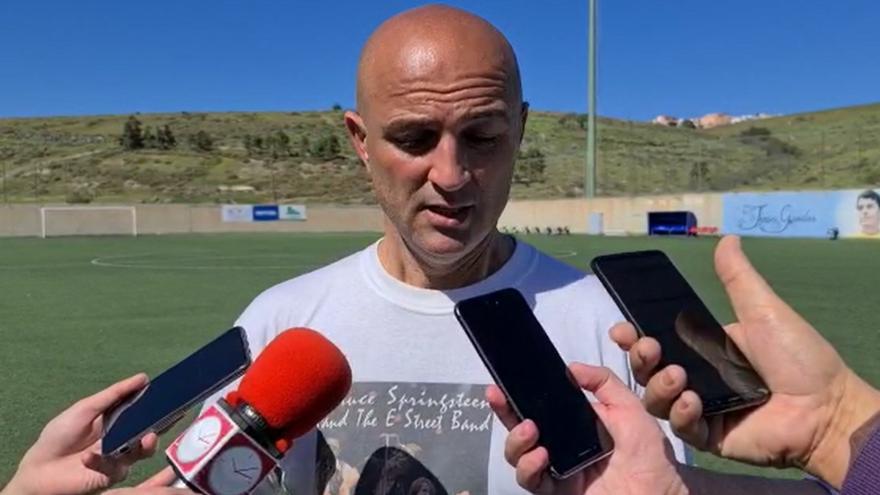 Juan Guedes continues to be a fort. The Tamaraceite does not know the defeat in the capital stadium even if Algeciras visits him, leader of Subgroup A of Group IV of Segunda B. The island team had been uphill with Ubis’s goal, but Asdrúbal rescued a point in the 83rd minute with a great goal for the Andalusian squad and maintains the difference of three points with the Andalusian team.

That what was at stake had an aroma of teams wanting to move up in the category was seen from the first ball in play. David González, the soul of Tamaraceite, lived it in his flesh 30 seconds into the game when he took a kiss from Raúl’s studs on his ankle. Laps of pain on the grass that did not translate into a penalty card but was limited to a warning so that the game would pass by the boundaries of sportsmanship rather than by the underground game.

Del Algeciras highlighted the drawing on the field of play, surprising due to its lack of fixed positions. The players commanded by Salva Ballesta moved freely between the lines and supported themselves with the trio of centrals in the rear. A physical requirement that could have repercussions in the face of the increased level of touch that Tamaraceite prints with the carats of Toni Robaina and the Booger in the heart of Gran Canaria.

The weight of the match was carried by Támara from the start of the crash and the danger over Vallejo’s goal did not cease, although with a lack of success. Robaina, Julio Báez and Eros hammered the rival goal in the initial fifteen minutes but without feeling of being able to pass the goal line.

Quite the opposite that caused between Ubis and Canillas around minute 20. A long ball from the center of the field caught Alberto’s back and the ball was planted in Nauzet’s domains without a clear owner. Ubis tried first and in the rebound it fell to Canillas, who was recreated with the leather and gave Aythami Álvarez time to slide on the green to avoid the first goal of the morning.

Both teams were looking for him. Equality was evident in Juan Guedes between the two teams that command Subgroup A of the fourth group of the Spanish bronze category. Respect was mutual although without speculating in any second, any mistake would cost dearly in the fight for the qualification for the Playoff of promotion to the SmartBank League, which is very tight at the top of the table with four teams separated by three points .

The speed with which it was played until the equator of the first part of the duel caused the energy to be reserved because the crash still had an hour of play left. Possession was divided between the two contestants. The plague of midfielders on the mat, five by the two teams, turned the core into a true jungle of legs waging a war to gain control of the game.

Tamaraceite was missing the criteria of his compass on the grass, David González. Without the extension of Chus Trujillo in the green, overwhelmed by the brand of Yelko Pino and Raúl Hernández, fluidity was lacking in the local game. Except for the long balls from the center line to Eros, or the attempts by López Silva and Julio Báez on the flanks, the local offensive potential was inert.

The break came with a small scare in the body of the Algeciras goalkeeper after Toni Robaina launched a free-kick from the edge of the area and sent the ball close to Vallejo’s left post.

Chus Trujillo shook the shaker and made changes in his lineup to face the second half. Asdrúbal Padrón gave the relief to Eros and some annoyances of Ale Pérez forced him to give place to Jordán Hernández in the right lane. The fight of the Buffalo in the blue and white forward was seen from its first breath squeezing the Andalusian defenders.

With more air in their lungs, they came twice almost in a row. First in a counter led by López Silva by his band, which ended with a trip in the area to Toni Robaina that was not sanctioned by the referee trio; and then the turn was for Algeciras, who had the goal in Raúl’s boots when he stood alone against Nauzet and the goalkeeper chicharrero pulled out a miraculous hand to avoid the goal. So far, the hero of his team with three stops of merit during the morning.

But he could do nothing in the Algeciras goal. The Tamara, looking to open the can, he launched himself with almost everything to the execution of a set piece and was left unguarded in the defensive zone with David García as the only mark. He took advantage of the against the Algecireño team to put the 0-1 in the light. Raúl got rid of the insular central defender’s mark in the race and gave Ubis the death pass to push the ball into the capital’s net.

Chus Trujillo did not take long to react and before they removed from the center point he introduced Ismael Fagir and Jonathan Quintero in the attack point to the detriment of Julio Báez and Toni Robaina and bet everything not to lose their unbeatable status in Juan Guedes.

With both in favor of Algeciras, the Andalusian team went into time-wasting mode. Between faking blows, throwing himself to the ground to scratch minutes and despairing the local players with tricks, he tried to reach 90 ‘commanding the score.

Asdrúbal had to be careful, excessively driven by his emotions in search of the equalizer and which cost him a yellow card and a later warning for another encounter with Vallejo in a clearance to the desperate green goalkeeper.

So much heart puts the Buffalo that it could not be someone else who put the emotion seven minutes from the end. Between so much loss of time, Vallejo won the yellow card for delaying a goal kick and with the subsequent rush he lost the ball for raffling it. Alexis Ramos picked up the ball, passed it to Asdru and he released a direct shoe to the squad to make believe in victory and the assault on the leadership in the closing stages.

Quintero had it in the discount. With the Tamaraceite overturned on the rival area, the team’s top scorer got the ball from above and with a spur control and the subsequent point-blank shot was seen with Vallejo’s body on top of him to avoid the defeat of his team.

The game ended as a true runner-up and with long kicks by both teams, one looking for victory at home and the other defending their leadership in the group, which is how things turned out with the distribution of points in the Juan Guedes.