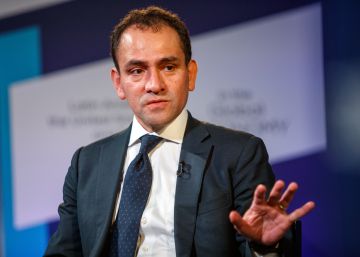 The head of the economic affairs of Mexico, the Secretary of the Treasury Arturo Herrera (53 years, Actopan, Hidalgo, Mexico), is one of the most trusted men of Andrés Manuel López Obrador, long before he was president. When the president was head of the Government of Mexico City, he already turned to Herrera to be his secretary of finance. Now he was appointed secretary (minister) after Carlos Urzúa resigned from the position among strong criticisms of the president's management. Herrera participated this week in New York in the forum ‘Latin America, the United States and Spain in the global economy’, organized in New York by EL PAÍS and the Spain-U.S. Chamber of Commerce Herrera attended the country after his intervention, just a few hours before the shadow of the impeachment hit Donald Trump, which could complicate, or at least delay further, the approval of the new free trade agreement with the United States and Canada, his biggest concern.

Question. Mexico has bypassed the recession, but the economy is suffering a slowdown. Should we be calm?

Reply. We have to be busy. What we have to do is recognize that there is a cyclical problem and that it must be addressed. The traditional way in which a problem of a cyclical nature is passed in the form of a deceleration, on the demand side, requires the support of fiscal and government policy to revive the economy. We are advancing some purchasing processes for an amount equivalent to 5,000 million dollars, and since there is a shortage of resources we are looking for agreements with the private sector.

R. We will have to see if he is really optimistic. One of the effects is arithmetic. When an economy grows a little one year, the next it does more. In the last decades we have had a growth of 2.4%, we are talking about an average of 2%, it is a conservative scenario. What can change? To the extent that the global economy has been slowing down, the decline in interest rates on federal reserves has been happening and, therefore, improving credit conditions. In addition, there is the price of oil: our mix went up in six weeks, from $ 47 a barrel to $ 61, although we have to be careful. But there is a central element that is the ratification of the free trade agreement, the T-MEC. If it were ratified in the coming weeks, for which there are no guarantees, it would completely change the ways in which the Mexican economy would operate. It is not known what will happen between the United States and China, with the United Kingdom and its possible exit from the European Union ... If in an environment of global uncertainty, there was a very high point of certainty in Mexico, it would be the ideal place for a part important value chains linked to the US economy will begin to be located

P. How long do you mean with a few weeks?

R. The next six weeks and in particular October. We are optimistic, but aware that if the process begins to delay for any reason and begins to approach the United States electoral cycle, it complicates it. The political scenario could complicate the approval process of the T-MEC.

P. What future awaits Mexico if this treaty is not approved?

R. We have a treaty, the current one, that would remain in force. It is an extraordinarily solid element, but the new one would give much more certainty.

P. To what extent are you concerned about the lack of private investment in Mexico?

R. It is central. One of the problems of the Mexican economy and public finances in particular is that we have been investing little. If we want the Mexican economy to grow, we need private investment to grow. We need to create the conditions of certainty, associated with various things: a stable economic framework, a stable inflation ... In addition, we must have concrete projects, with name and surname, to guide the private sector on where their investments should go.

P. A few weeks ago, Mexico unblocked the gas pipeline conflict with the United States and Canada with Carlos Slim as a key figure and staged it with an appearance by the president surrounded by important businessmen. How necessary was to stage that support?

R. It was nothing more than an image theme. Perhaps of the same magnitude or greater than that of the engineer Slim was the role played by the Business Coordinating Council. Antonio del Valle and Carlos Salazar were a kind of mediators in good faith. If I am honest, for me it was one of the most worrying issues and it was solved in better conditions and much faster than I expected, thanks to the good offices of Carlos Salazar and Antonio del Valle. This proves that even if there is any disagreement, we have the capacity to reach an agreement with the private sector on conditions that are perceived as fair, market-friendly and favorable for all parties.

P. Does it also refer, for example, to the cancellation of the airport?

R. There will always be something, budgets, contract issues, investments ...

P. What message do you send with the budgets presented to both domestic and foreign investors?

R. That it is a responsible budget, which tries to respond to some of the most important problems in the country, that the main anchor is a primary surplus, but also aims to address some contradictions of Mexican society, as we have a very poor and stagnant south and A center and a dynamic north. This is very understandable in Europe in general and in Spain in particular.

P. They have injected 5,000 million dollars to cover part of Pemex's debt. How long will it take to revive the oil company?

R. It is important to note that these 5,000 million refer to the second part of a three-stage transaction. The third one is alive in the United States and I cannot comment particularly here, but it seems to us that it is a transaction that solves a very important part of the problems that are perceived in Pemex. The second concern is that production has been falling for 14 years. It has already stopped, has already stabilized and has begun to reverse. To continue producing not only requires that they are operating well but that there is a change in the government's fiscal policy. We change the tax treatment we are giving Pemex, allowing it to maintain a greater amount of its profits to invest and also injecting capital directly

P. Many voices demand a tax reform. When should you rush?

R. Mexico needs to raise more. We are trying to collect better what we are authorized to pay, we are focusing the first part of the Administration to combat tax evasion and fraud, we are making a reform of the tax framework, making it much more difficult to avoid paying taxes.

P. His predecessor resigned with a very critical letter with the president's management, in which he spoke of decision making without sufficient support, of conflict of interests in people close to the president. Have you felt any of this?

R. That has not been my experience, I do not know what the dynamics of my predecessor's work with him was. There are only two large areas that occupy the National Palace in Mexico, if we see it from the front, from the Zocalo, the right wing is the one occupied by the president; the left wing, the Ministry of Finance. In such a way that we are not only the instrument from which the economic policies of the country are implemented, because what is not in the budget is demagogy, but we occupy the same space, there are many opportunities to meet daily with the president , almost every day.

P. How is your relationship with him?

R. Very good, and it is not new. It is a relationship of trust, of respect.

P. How many times do they speak throughout the day?