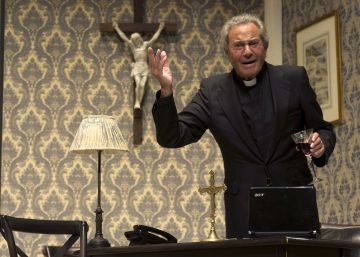 In the last years of his life Arturo Fernández He suffered severe back pain that had him martyred. But, according to him, as soon as he climbed on stage the pain miraculously disappeared until the end of the performance, invariably crowned by the applause of a faithful and numerous audience that adored him. I remember a scene in Men do not lie when in the middle of a scene of marital discussion (the discussion was typical of the theater he practiced: about how many times the character he played had put the horns on his wife, and how many she had put them to him), Arturo he took off his jacket and left it carefully on the back of a sofa, while saying to his wife: "Wait, chatina, let this American hang, which is very expensive, this American is worth much, much more than our conversation ". I went three times to see that work just to hear this phrase that was written so maybe it sounds dull but with that grace of yours that could not stand, that grace with which I played again and again the same role of helpless seducer, left me speechless between the great laughter of the respectable. Despite those backaches he never wanted to retire, say goodbye. "Theater is what gives me life," he said. And in fact there was only another show that in his eyes could almost compete with the theater: football.

One of the most satisfying times of his life, he said, was the summer of a world soccer championship during which he represented in a theater in Marbella one of those works of "high comedy" (a term he liked, however debatable it may be ). "Throughout the day, with the blinds down and the air conditioning on, I was in my hotel room watching TV on match after match of the national teams. And then, around seven o'clock in the afternoon, I went to the theater, to have a blast and to collect the applause from the audience. At the end of the summer I said to my wife: Marbella is wonderful! We have to buy a house here! "And he did it without having seen Marbella more than his hotel and the theater. Arturo Fernandez liked to tell anecdotes like this, or like the troubles that happened when he went to his home to visit a priest friend and coincidentally coincided with another friend who was a tremendous comecuras. He was a fabulous and generous oral narrator. Not that he was the best actor in the world but he had something better, a particular charisma. You will be remembered for Truhanes, for the delicious television series The house of trouble, and for that emanation of optimism and ease that accompanied him. That idea of ​​life as an easy and almost given thing, which he embodied with his simple but irresistible charm, with that conventional elegance that sat him divinely.

“Like a miner, I have gone to the depths of myself”