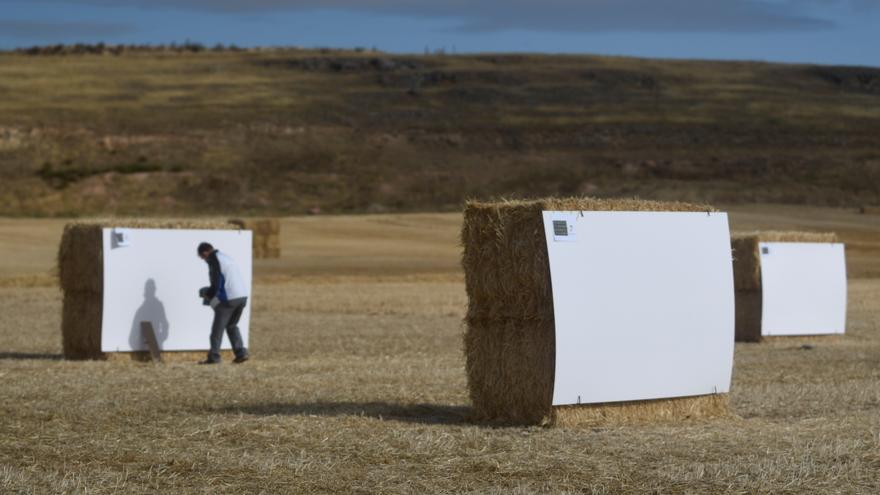 Espirdo (Segovia), Aug 7 (EFE) .- A fortnight of artists this Saturday has captured their paintings on canvases arranged on straw bales in the middle of the field to express with colors and textures the emotions that nature inspires them, such as love who feel for this land or concern for the abandonment of their peoples.

About twenty bales of straw serve as a trestle for as many white canvases measuring two and a half meters long and one and a half wide, which are distributed this Saturday in a field of work in the Segovian town of Espirdo as the scene of the XII Art contest in Nature, which is organized by your town hall.

For Espirdo, a municipality of 1,389 inhabitants located eleven and a half kilometers from the provincial capital, it is “an important day,” as its mayor, María Cuesta, has indicated in an interview with Efe.

“It is a day in which nature is linked with art, of contact with each other, of coexistence”, he summarized.

The first of the fans to arrive at the straw-covered esplanade this morning was Juan García, a 68-year-old retiree from Segovia capital who, although he has never devoted himself to this artistic discipline in a professional way, makes him have “good times” .

He fears that it is “a bit tiring” to stand so many hours in front of his canvas, in which he intends to capture a portrait of the Hermitage of Our Lady of Veladiez, without thinking much about the award.

“The important thing is to participate, but if a prize comes, well; and if not, well too, no crying for not having obtained it ”, he says.

Among the participants you can see very diverse profiles, also of young people like María Sanz, a 20-year-old neighbor of Espirdo who studies Fine Arts and it is the first time that she has dared to participate, in her case with a work that she will put on the table the issue of depopulation in rural areas.

“I have friends who go to town because there is no coverage and they want to disconnect, but then in the long run they cannot live there and have to return to the city, and that cannot be, because that is how most of the abandoned towns end up,” he says. the young woman, who in the future would like to be able to continue living in a town.

Like her, throughout the morning the rest of the artists registered in this edition have arrived – although it is expected that some more will join the last now – to carry out until the afternoon a work inspired by nature and the rural environment for Opting for one of the three prizes that are distributed and which are endowed with 500, 300 and 200 euros, depending on the classification position.

A photography contest is also held in parallel, through which about eleven portrait artists will try to offer an original document of the day worthy of one of the prizes distributed for this category: With 300, 200 and 150 euros.

At the end of the afternoon, the awards ceremony for the painting works will be held -the photography awards will not be awarded until next week- and, as a novelty this year, the contest will feature a live musical performance by the Pangea group as culmination of the day.

The organization has counted this twelfth edition with the participation of the People Foundation, which works with people with intellectual disabilities and will take a dozen of its users to the venue of the contest so that they can also decorate some of the canvases, out of competition.

Another participant who has begun to impregnate her straw bale with ideas from the first hour has been Pachuca Sotomayor, an original artist from Bilbao who has been living in Aguilafuente (Segovia) for eight years and has held exhibitions in different parts of Spain.

The 59-year-old painter considers “a prize” to live in Segovia, to which she says she is “very grateful”.

“I love the people, the friends, the layout of the city, the mountains, the river, the contact with nature, which is very important to create,” explains the artist.

In his case, he will carry out an abstract work with some of his usual materials such as fabrics and sands, and others from the environment itself, such as the straw on which the canvas is based: “Let’s see what inspires me, I don’t even think about it. nothing, I try to align myself and see what the painting wants to be today ”, he says.