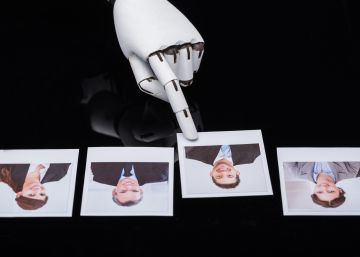 The Alcampo supermarket chain has incorporated a virtual sommelier that offers the customer the most suitable wine for each type of food. In Estonia a robot judge is designed that can handle small trials. The Artificial intelligence everything changes and also the way to hire workers in companies. The models of personnel selection with video interviews and questionnaires that qualify an algorithm to classify the most appropriate candidates for each vacancy become strong in Spain.

The candidate normally has five days to conduct an online interview (although the period may vary depending on the contracting company). The staff manager designs the questions and the candidate answers at home or in the place of his choice. "The coach saves time and the candidate values ​​the system because the public is increasingly accustomed to recording on social networks and being able to choose the place and time to do it is a plus," says Beatriz Zabalegui, Easycrue Marketing Director.

This company has developed an artificial intelligence algorithm applied to video interviews that suggests the best profiles thanks to an automatic analysis of criteria such as verbal content, prosody and gestural expression. "Now those in charge of the selection process can evaluate and classify the interviews in order of interest and not in chronological order," says Zabalegui.

More and more companies add to this trend. "Its use is spreading because as more distribution channels are used, jobs become more specialized and efficiencies are sought in the hiring process, such as filling vacancies faster," explains Josep Curto, academic director of the master in business intelligence and big data of the Oberta University of Catalonia (UOC). Many companies manage a high volume of applications and selecting the right candidate consumes a lot of time and resources so companies such as Telepizza, Porcelanosa, Prosegur, Securitas Direct, Five Guys, Telepizza, Econocon or Sprinter already include this video interview system to hire personnel in Spain.

The AI ​​has more uses in the field of the selection of new workers since the vacancy is announced. When the job offer is publicized, language patterns are analyzed to create more attractive descriptions based on the publication channel used or the distribution of the advertisement in different channels. “Another point where work is being done is the pre-selection of candidates based on keywords and their correlation with experience, skills and traits, it is called pre-filtered curriculum or screening”, Says Curto. "In addition, other companies use closed and open questionnaires, capacity tests and other aspects that an artificial intelligence system evaluates," he adds.

The danger with artificial intelligence based algorithms is that the data used to select personnel are biased and show discrimination. "For example, the selection of one candidate or another depending on whether a woman is of child-bearing age, who has studied in certain universities or even territorial issues," warns Carlos Gutierrez, Secretary of Youth and New Realities of Labor Commissions (CCOO) ). Artificial intelligence is not safe from the discrimination suffered by workers in the analog world. In CCOO they demand that the institutions control these technologies and audits of the algorithms are done, so that there is no discrimination and there are ethical values. “In many cases the problem of technologies is that they are implanted in a state of inequality,” adds Gutierrez.

Linkedin uses machine learning in the US to help companies not discriminate against candidates because of the subjective opinions of personnel selectors. The tool works with anti-gender criteria, such as the choice of the optimal candidate regardless of gender.

But also artificial intelligence can be inclusive. This same platform has begun to use it to generate automatic descriptions of the photographs to make the contents more accessible for blind people. In addition, these descriptions may or may not be added to user publications. LinkedIn technology (Microsoft-owned company) is under development and will be available in 2020.