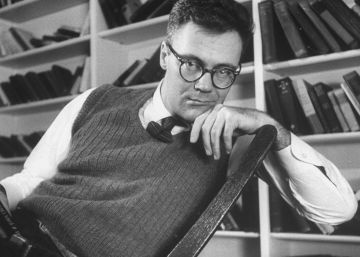 In New York September has days of extraordinary climatic sweetness. The great heats of summer have passed but the vegetation still has a luscious green, and in the air there is a delicate warmth, especially in the middle of the afternoon, when a golden sun takes a long time to decline towards dusk, as in a rare time stopped. One of those days of September, in 1977, the poet Robert Lowell, newly arrived from England, took a taxi at Kennedy Airport and gave the taxi driver the address where he had lived with his wife and daughter up to seven years ago. In this story, as I discover and tell it, everything becomes familiar to me. The house where Lowell’s ex-wife lived, Elizabeth Hardwick, It is a noble brick building on a street that I know very well, 67 West, just where a legendary restaurant in the city, Le Café des Artistes, was. Hardwick died there in 2007. I may have crossed paths with her, because I lived very close in the fall of 2001, and in the following years I have walked a lot in that neighborhood.

I can also imagine Lowell entering the city from Harlem, recognizing her by the taxi window after an absence, to that afternoon sun that embellishes everything and even dampens the ugliness of poverty. I imagine his eyes looking intense behind the glasses with large glasses and black frames. Lowell suffered from bipolar disorder, but in recent years it had stabilized thanks to lithium. Perhaps this return, the reconciliation that meant, had to do with that improvement, with a kind of belated serenity. Next to him, in the taxi seat, he carried a painting that I also know, a portrait of the woman he had just divorced, the same one he had left Elizabeth Hardwick seven years before. It was called Caroline blackwood, and his portrait was painted by Lucian Freud.

Hardwick might have been looking out the window to see the taxi as soon as it appeared in the corner of the street. That building was intended for artist studios and has very large windows. The taxi stopped but the back door did not open. Robert Lowell was dead, shot down in his seat, with his glasses down. At some point in the taxi ride a heart attack had struck him.

To accept that truncated return, Elizabeth Hardwick had had to forgive Lowell more than her abandonment. In 1970 the poet traveled to England to teach some classes and did not return. Hardwick was in New York, with the daughter of the two, who was then 12 years old. In the letters to the absent husband he confessed his longing and his many burdens, the troubles of practical life, the responsibility of caring for the daughter, of paying the bills, of earning money by writing. His return was still delayed. His letters became vague and ambiguous. He had fallen in love with Caroline Blackwood, an English aristocrat, writer, living, very attractive, mother of three children. It is a time when international telephone communications are expensive and complicated: the break between Lowell and Hardwick is woven into a tortuous coming and going of letters with airmail stamps, spurted with remorse, complaint, accusation, of supplication. The couple’s letters intersect with those of the friends of the two, a mosaic of words written on sheets of paper then folded and stored in envelopes, deposited in mailboxes, received with expectation and fear, open envelopes with a nervous impatience that Sometimes it leads to tearing them apart. Among the friends and confidants of Lowell and Hardwick are some of the biggest names in American literature at the time: Elizabeth Bishop, Mary McCarthy. Life and literature, confession and sharpness, are mixed in the letters in a passionate and urgent way that perhaps does not exist in any other form of writing.

In 1972 the divorce is signed and a certain appeasement arrives. But very soon the scarred wound of Elizabeth Hardwick reopens with more pain than ever. In 1973 the new book of Lowell is published, titled The dolphin: Dolphin, dolphin, is the affectionate name that the poet gives to his new love. Hardwick opens the book and finds in it, including without changes or dissimulation in the poems, entire fragments of the letters of suffering, anger, reproach and supplication that she herself had written to her during the two years of her separation. Anyone who reads the book and knows something about the two will identify without a doubt that humiliated and aching voice, to that Lizzie abandoned from the poems. Lowell had often used literal quotes from other poets, fragments that he included as pieces of collage In his own writing. But by owning himself without permission and without respect or modesty of the letters of his wife he had gone further, it was perhaps permissible in a literary work. He had looted and exposed an intimacy violated by himself, in an act of abuse that not even his closest friends could forgive him. The letter that Elizabeth Bishop wrote is a whole unsurpassed essay on the ethical limits of literature. There are things that a writer cannot or should not do if the result is immediate and perhaps irreparable harm to an innocent person. A sentence in Bishop’s letter has become proverbial: “Art just isn’t worth that much.” Art is not worth so much, it is not so much.

Without that other art now disappeared, that of the letters, now we could not know in such detail this story. The letters have become as hopeless as some species of butterflies or birds that vivified splendid ecosystems and now do not remember or miss almost anyone, except the entomologists or passionate ornithologists who continue to study them in the showcases of the museums. Saskia Hamilton, who had already published the correspondence between Lowell and Bishop years ago, has now put together an even more novel and more stimulating book to read, The Dolphin Letters: 1970-1979. The poems of Robert Lowell and those of Elizabeth Bishop, the essays of Elizabeth Hardwick, her rare and memorable Nights of Insomnia, convey admirable voices of literature, written presences. In the letters of each one of them there is something else, a shudder: that of really listening to someone.

Tags: art, Author, be, hurt, irreparable, must, outcome, person, righ now, thing, to have, to worth, to write