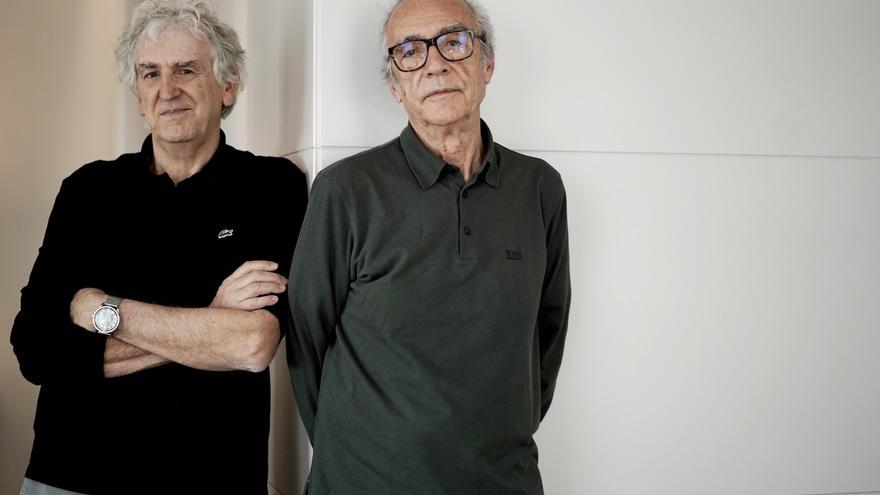 They are happy, like boys, rejuvenated by friendship and by the search that brings them together, this time, to find out what happens with aging and death. Who provides knowledge is the anthropologist; the other is the poet. Juan Luis Arsuaga, paleontologist to whom the vitality of Atapuerca is due, and Juan José Millás, creator of fictions in which he is sought as a ghost lodged in his mind. The writer baptized the duo: the scientist is "Darwin's bulldog" and he calls himself, after a phrase from his compadre, "the Russian anarchist." Here, side by side, they give interviews about the book The death told by a sapiens to a Neanderthal, the second of the saga published by Alfaguara and which began a year ago with The life told by a sapiens to a neanderthal (both in Alfaguara). The sun shines on them in the white hotel room where they receive. They don't flinch: they laugh, they engage in puyas, they are happy.

May death catch us healthy! Arsuaga just said the interview that preceded me.

Arsuaga: Already. But it seems that this forces us to die healthy and the existentialists said that we must die with our bodies destroyed, used, crushed. There are paradoxes in life, huh.

You, Juanjo, are the poet of this duo.

Miles: Well, according to Arsuaga, I'm the hippy, the romantic… I've always thought that I came from a materialist tradition, but contact with Arsuaga has made me see that I didn't. And I agree with him rationally, but not so much emotionally. Many times I tell him: I believe you because this has happened, but it is unlikely. I know that science is true, but the Bible explains it better.

Throughout the book you are defining yourself. Sometimes jokingly and sometimes seriously: one is Darwin's bulldog and the other is the Russian anarchist. You are that kind of Millás entomology.

Arsuaga: Yes, at all times. What happens is that we are fighting. With love, huh. It is that I, as a scientist, think that Darwin is a giant because he managed to explain biology. Just like Newton did with physics. So the miracle of understanding something is extraordinary. Millás neurons enjoy other foods.

You bring the vision of the anarchist, you always question the teacher, perhaps to understand more.

Miles: Well, I question it when I don't understand something. I mean, I don't want to pretend I understand. And to understand I question, I ask, I don't believe what he tells me so easily.

Arsuaga: Well, Groucho Marx said "don't pay more attention to what you see than to what I tell you."

Miles: All this implies continually questioning. But I also trust that my arguments will also be questioned by him.

Arsuaga: But, God willing, all that will be resolved in the next book, when we talk about altruism, selflessness, cooperation, constitutive things of the human being.

Arsuaga: The other day I was talking to a woman who had been to Japan and knew the history of sumo well and she told me about it and I think maybe one day we'll see each other in a match like this, hahaha.

How is the human relationship of two people with such different knowledge? What has Arsuaga given you?

Miles: He always makes himself interesting and I can't get enough of him. I have a lot of admiration for him. We have created an addiction that goes both ways. Sometimes he goes to a place and tells me: what a pity that you are not here to explain it to you.

And what have you learned from an ignorant?

Arsuaga: Hahaha. Well, I'm also ignorant, huh. Perhaps he is wiser than me. I don't know many things, that's why I search. And in the book I really respect how he describes me, I don't correct him at all. I could cross things out, but I don't. It is that Millás has robbed me of my loneliness. I was happy being alone and now I'm not. Now there are times when I need Millás.

There are many metaphors in these pages.

Miles: There are metaphors because this is a science book, but also a literature one. For this reason, in order to explain many things that Arsuaga told me, I had to resort to metaphor.

One reads the book and discovers that it is like an encyclopedia of what worries us.

Arsuaga: Yes, because you see the final horizon. And that is very human. The fact, for example, that our genes survive us is impressive. Knowing that we have many genes shared with animals... makes you dizzy. It is dizzying to know how many bodies have come to me. This has a philosophical aspect, look at him. You just can't help but peek at that kind of thing.

This book cannot be conceived without eternity, too.

Miles: For me, the word eternity refers to a Sunday afternoon that never ends. I've always panicked on Sunday afternoons. When I had a surgical intervention they sedated me and… the feeling of not being there is like eternity. Or so I think.

Have you observed a special personality in Millás, has it caught your attention as an individual?

Arsuaga: Of course yes. He did not have a very close relationship with science or with nature and these books have opened up many worlds for him. And that only happens to someone special.

And what does this experience mean to you?

Miles: Well, my perception of everything has changed. In other words: I no longer see anything as I used to see it before. And now many times, when faced with something, I say: what would Arsuaga say about this. I have also realized how wrong it has been not to study more or get closer to science. I have always been in the Humanities and… without knowing these wonders. When I thought that it no longer made sense to approach science, at this age at which I have reached, I met Arsuaga. And I was struck by his verbal discourse. It made me want to knit it with what I do. And that is this book.

Arsuaga: That's what it's all about, yes. Death is inseparable from life. Because everything is recycled and is continually dying and being born. And that must be claimed.

But Millás says that biology has no sense of humor.

Arsuaga: Well, it may be so. Biologists do have a sense of humor, but biology doesn't.

I want to go to the tone of the writing, Millás. There is a high poetic temperature here, it is as if you were writing with joy. And your descriptions are very accurate.

Miles: It's just that precision seems like a literary attitude to me. This is what most attracted me to Arsuaga's oral discourse: precision. And that is also something very typical of poets. And science is also accurate.

Arsuaga: I always try to explain to my students that sentences have to be like mathematical equations. Each element of the equation is relevant and can change everything. And he has understood that very well. That is why I believe that there is a great scientist in Millás, what happens is that he has not developed it. First of all, he has creativity, which will allow him to invent theories. Because theories are invented. Then comes the accuracy of the mathematician and the ability to know how to describe.

You tell Arsuaga that writing this book has screwed up your life. Up to what point?

Miles: Well, there's something rhetorical about that. Until before this book, I knew he was an old man. But the image I had of myself was of someone younger. Because I don't have big ailments or what do I know. But when I started this book, I suddenly looked old and said: this book has screwed up my life.

But Arsuaga encourages you from time to time.

Miles: Yes. With sexual selection, for example, hahaha. He has explained to me that there are specific things that serve to attract the male or the female. The peacock's tail, for example, which is only for taste. How interesting, right?

Arsuaga defines himself as a provider of questions, but suddenly he is infected by your existentialism.

Miles: It's that Arsuaga, under that appearance of vitalism, has moments in which he sinks into Zen. Or in moments of despair.

What reflection does this country arouse in you now, after having talked about everything you have talked about in the book?

Arsuaga: Because you're focused on the journalistic thing!

Tags: argue, interview, miles, Ride, they come back, together