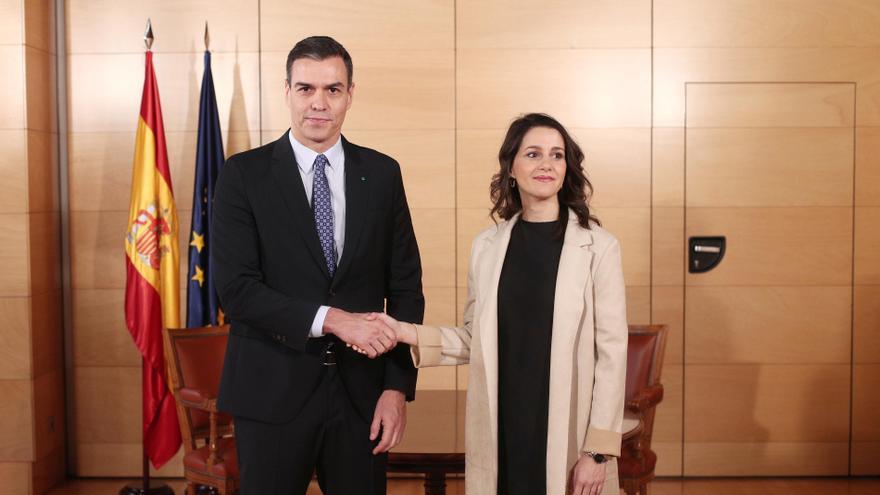 Inés Arrimadas will return to Moncloa next Wednesday, September 2, to hold a meeting with Pedro Sánchez within the framework of the round of contacts that the President of the Government will maintain with opposition leaders. The appointment will be at five in the afternoon, several hours after Sánchez has received the president of the PP, Pablo Casado. The same issues will be on the table: in addition to "co-governance" measures with the autonomies to fight against the outbreaks of the pandemic or the renewal of positions in the General Council of the Judiciary (CGPJ), the Constitutional Court and other institutional bodies -like the Ombudsman and RTVE- the priority now for Sánchez is the General State Budgets for 2021.

Casado has already warned him that he will not agree to anything with the Government while he is allied with United We Can. But Arrimadas is willing to skillfully play her cards and squeeze the power of her ten deputies to the maximum against the allies of the President of the Executive Branch, very much in need of support to carry out his agenda and especially the public accounts, which are key to survival. of the government. However, this approach to Ciudadanos has opened a new rift between the formation of Pablo Iglesias and the PSOE. This Friday, the spokesperson for Podemos, Isa Serra, has maintained that the political project of its formation is "incompatible" with that of Citizens and has assured that "the PSOE knows" that it will not be able to count on them if it intends to include in the agreement to those of Arrimadas.

In a press conference offered together with the also spokesman, Rafa Mayoral, Serra added in a warning tone: "We hope that the PSOE will take care of the majority that supports this Government."

Nor has Sánchez liked that predisposition to make assignments to Citizens to EH Bildu, and much less to ERC, which has been relegated to the background in the round of meetings that the President of the Government begins this week in Moncloa. Republicans have thirteen deputies in Congress, three more than Ciudadanos, which is the sixth political force in the House. But the fear that they will turn their backs on the government, as they have done on other occasions, forces the president to keep his back with Ciudadanos.

In fact, since the pandemic broke out, relations between the so-called "liberal" formation and the PSOE, whom Albert Rivera vetoed, have turned 180 degrees. The new party leader has negotiated with Sánchez all the alarm decrees and most of the measures to get out of the health crisis. And from the first moment they have announced that they are willing to sit down to agree on the accounts but always under conditions because, as he insists, "the Spanish economy is neither for nationalism nor for populism", so "sensible budgets are urgently needed."

For this reason, Ciudadanos wants to avoid the photo with members of the United We Can cabinet, where, with exceptions - such as that of the Minister of Labor, Yolanda Díaz - most of its leaders have long insisted that the Socialists cannot surrender to "the rights" if they want to keep the majority of the investiture. The swords between both parties for this reason are raised. But Sánchez does not want to renounce the support of Ciudadanos in case, as he fears, ERC - already immersed in the pre-campaign of a Catalan autonomous region still without a date - stands out from the negotiation.

That mutual veto between Ciudadanos and the Iglesias party was already clear in the previous meeting that those of Arrimadas held on August 3 with a Government delegation headed by the first vice president, Carmen Calvo, in which they addressed the situation of outbreaks of COVID-19 and reviewed the previous agreements reached between both parties. Then, the deputy spokesman for Ciudadanos, Edmundo Bal, assured that there had been "no veto" against United We Can, As the Minister of Equality, Irene Montero, had denounced on the eve of the meeting, who denounced that her formation requested to be present but those of Arrimadas refused. Montero criticized the appointment and reproached that "whoever looks to the right is part" of the Executive.

"Ciudadanos is not on it," Bal insisted. "With the one that is falling, you cannot be thinking about vetoes or who occupies the chairs," he added, to later recall that "the same people, the same government representatives" who attended the previous meeting had been seated at that meeting. with Citizens and who "have competencies in the matters dealt with." At that meeting held in Moncloa, there were also no ministers of United We Can: in addition to Calvo, there were the head of Territorial Policy and Public Function, Carolina Darias, and other representatives of the Government , like the Secretary General of the Presidency, Félix Bolaños. However, Bal recalled that he has "no problem" in speaking with ministers of United We Can, as he demonstrated when he sat down with the Minister of Labor, Yolanda Díaz, to address the extension The minister herself intervened in the controversy and defended this Thursday in an interview in RNE that in the negotiation of the General State Budgets "an good and less in pandemic ".

That refusal of Citizens to United We Can has been further fessed after the imputation by a judge of three collaborators of Iglesias and the party itself as a legal person for alleged irregularities in their financing. The Arrimadas party joined the PP to request the urgent appearance in Congress of the second vice president, a demand that was overthrown in the Permanent Council thanks to the votes of the PSOE United We Can, ERC, JxCat, PNV, Bildu and Compromís. Only Vox supported her.

Another of the issues that Sánchez will raise with Arrimadas will be the need to renew the positions of the CGPJ and the Constitutional Court that at first it seemed he had on track with Pablo Casado. But there it will puncture the bone because in Ciudadanos they have already advanced that they will not enter into "the change of cards" to distribute the organs of Justice and they demand a reform of their election system to avoid them being in the hands of the political parties.

As for RTVE, those from Arrimadas advocate for once again accelerating the public tender process that was paralyzed in Congress when the November 10 elections were called. However, they are hoping that the current sole administrator, Rosa María Mateo, resigns considering that her management is being "disastrous" and is "at the service of the Government of Sánchez." The person in charge of the public entity, in her last appearances in the Mixed Control Commission of RTVE, invited the parties to agree on the renewal of RTVE, ensuring that she is not "glued to the chair".