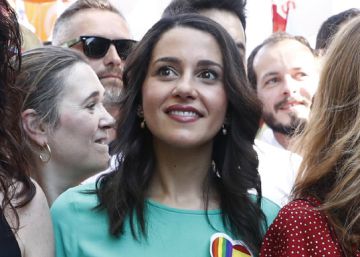 The spokesperson for Citizens in Congress, Inés Arrimadas, on Sunday called for the resignation of the acting Interior Minister, Fernando Grande-Marlaska, for behaving as "an irresponsible arsonist" and "feeding hatred" against the orange formation, whose members They were this Saturday rebuked and insulted by a group of attendees at the Pride march in Madrid.

Arrimadas has accused Grande-Marlaska of putting Cs "on the target" so that "the radicals throw bottles" in reference to said insults.

The Minister behaves like an irresponsible incendiary: the PSOE puts Cs on target and the radicals throw bottles at us. Resign if you have dignity. The batasunos or the CDRs have not shut us up; neither will the Sanchista government that fuels hatred against our voters pic.twitter.com/xAJD52mhOI

We condemn the infamies that are pouring on the Minister Grande-Marlaska, a committed, courageous and firm defender of rights #LGTBI. A reference for many and many.

All our support and affection, Minister. pic.twitter.com/96x6z5btRf

"Resign if you have dignity. We have not been silenced by the batasunos or the CDR (defense committees of the revolution). Nor will the Sanchez government that fuels hatred against our voters", has warned the leader of Cs in a message on his Twitter account. Sources close to the Interior Minister have declined to assess the resignation request of the spokesperson for Citizens.

Grande-Marlaska affirmed this Saturday that it is illusory to think that it will not have consequences "to agree with who in a blatant, even obscene way, tries to limit human rights", in reference to Vox's support to the coalition of PP and Citizens in the City Council of Madrid.

The PSOE for its part has condemned on Sunday the "infamies" that, in his opinion, "they are pouring" on Marlaska, who has defined as a person "committed, courageous and firm defender of LGTBI rights". "We condemn the infamies that are pouring on the Minister Grande-Marlaska. A reference for many and many", the socialists have pointed out through their Twitter account.

Vox has also asked for the resignation of the Minister of the Interior. "Our solidarity with the deputies of Cs that yesterday received the attack of the usual energumenos. We demand the resignation of Marlaska, a Chavez minister who justifies his street thugs and blames the assaulted, "wrote Santiago Abascal, leader of the far right formation, on his Twitter. For its part, the Popular Party has expressed this Sunday in a tweet its "support for" to Citizens. "All our support for Citizens. From the Popular Party we will always be in favor of respect, equality, tolerance and freedom", he has written the PP in his official Twitter account. "Let us remind Minister Marlaska that the bigots are not the ones who agree to lower taxes or guarantee equality. Intolerant are those who do not condemn attacks on public representatives, "said the secretary general of the popular, Teodoro García Egea.

The mayor of Madrid, José Luis Martínez-Almeida, has also referred to the incidents this Saturday in an interview at the Cope Network: "Regrettably, this is not just an incident that occurred this year, but in a series of years a series of events are taking place that for those who consider the Pride an inclusion party, I believe that it is transforming into the opposite, in a party of exclusion of those who do not think like certain people ".