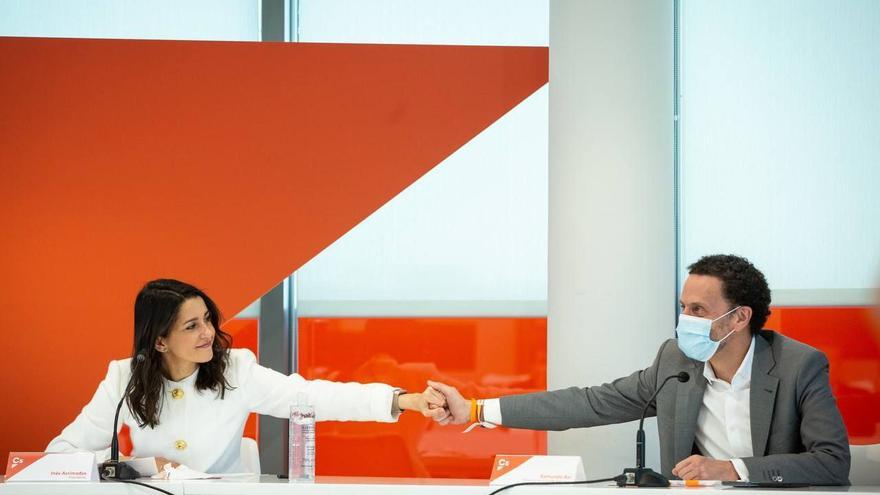 Inés Arrimadas has resolved the new and harsh defeat suffered this Tuesday Citizens in the regional elections in Madrid without resignations, without making the slightest reflection on the reasons for those terrible results and without a hint of self-criticism. The Ciudadanos leader, on the other hand, has praised the effort made by Edmundo Bal in this “difficult, highly polarized campaign.” “You have been the best candidate,” he told him, and he was rewarded by appointing him the party’s deputy secretary general, together with the person in charge of Communication Daniel Pérez, who will occupy another deputy secretary in the Executive.

The spokesman in Congress is reinforced after this new debacle and is ranked number two in the party, while Arrimadas announces that he wants to “relaunch” Ciudadanos because he believes that “the political center” they represent “is more necessary than ever.” For this, he has advanced that they will hold a political convention in July after the members of the Permanent Committee – the body that it already expanded after the crisis that arose as a result of the failed motion of censure in Murcia – visit the 17 autonomous communities to listen to their militants in order to “make a more participatory process”.

In a brief address to his colleagues, which did not last much more than ten minutes, Arrimadas revealed that the first thing he did was call Isabel Díaz Ayuso and Pablo Casado to congratulate them on the victory of the PP in these elections. Later he recognized that the result of Ciudadanos has been “bad” and they have not “managed to overcome that 5% barrier”, but he congratulated his entire team for the support that the militants have already given for the effort made in the face of the “difficult circumstances”. “We carried out this campaign with great enthusiasm and conviction, defending the values ​​that Ciudadanos represents, which are very necessary for Madrid but also for the whole of Spain,” he stressed, thanking Bal again for his work “because he has had to take on a very challenging challenge. complicated”. “Defending the political center has never been easy,” Arrimadas said, at a time when party leaders applauded the former candidate.

The leader of Ciudadanos also had words of gratitude “for the 130,000 people who have chosen concord” by depositing the vote for her party in the ballot box this Tuesday. “You are not alone, we will continue to be your voice,” she promised them, to add Immediately they have “heard the message of those people who even in the most adverse circumstances want a political center to continue in Spain.” Then he revealed that since yesterday they are “receiving the support of many people and entities that are aware of the need for a party like ours.”

Arrimadas has regretted that in these weeks the debate on the proposals has not prevailed but on “insults” and has insisted that Ciudadanos is “a party of brave people who do not throw in the towel.” The leader has settled the debate on the possibility of holding an extraordinary Assembly to renew positions and the project, as the critical sector agglutinated in the current Renovadores Cs insist, with the announcement of the celebration of that announced Political Convention for July.

“We want the debate to focus again on the programs and the agreements” and flee from “the political bubble to advance as a country.” “Ciudadanos is an essential party for Spain, and Spain is a better country with a project like Ciudadanos,” he concluded, recalling that they have the support of European liberals to relaunch the project. “Let’s go for it all,” he encouraged his people.