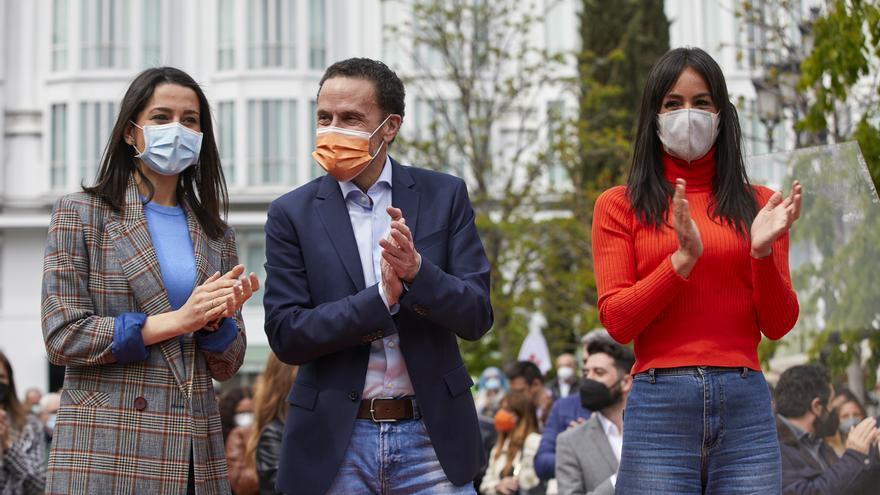 The president of Ciudadanos, Inés Arrimadas, and the deputy mayor of Madrid, Begoña Villacís, have wrapped up Edmundo Bal this Saturday in his presentation as a candidate for the elections of the Community of Madrid in a ceremony held in the central Plaza de Santa Ana in Madrid . The members of his list have attended and also Ignacio Aguado, the previous headliner, who is not in his candidacy and who has remained in the background while the candidate and the two party leaders thanked him for “his generosity.” Both Arrimadas and Bal and Villacís have insistently claimed “the political, moderate and sensible center” that they believe represents the candidacy of the State attorney, with whom they have been praised for not having “knelt before Sánchez and the Catalan coup plotters” at the refusing to sign a document so that they could be tried for sedition and not rebellion, an episode that Bal himself recalled during his speech. “When his life was resolved, he gambled to defend his principles and values,” Arrimadas said, to sentence: “Edmundo is prepared to preside over and lead a project for Madrid” and stop “extremisms.”

The leader of Ciudadanos, who arrived with the act started and when Villacís had finished his introduction, has asked the leaders of her party not to “throw in the towel” – given the bad prognoses that the polls give them – to mobilize and go to vote on May 4 because “when moderation stays at home, populism and radicalism triumph.” A request that he also made in the last elections in Catalonia, in which Ciudadanos clicked and went from 36 seats to only six and from being the first political force to the seventh.

Arrimadas and Villacís have turned to encouraging their own and highlighting the benefits and the “impeccable letter of services” of the new candidate, who have been cheered by those attending the event proclaiming him at the end “president, president.” Both Arrimadas and Villacís and Bal have had a recognition towards Aguado, especially the deputy mayor of Madrid, who shared the previous elections in tandem with him and who has become emotional when highlighting his “generosity”. “Can you imagine many politicians doing what Ignacio has done to step aside for the good of Spain? Thank you, Ignacio, it is a pride to preside over a party in which there are people like you,” the leader told him of Citizens. “Against corruption, Edmundo Bal”, has sentenced. Among the audience was also Ángel Garrido, who has announced his retirement from politics and that it was mentioned in passing by Villacís.

At the end, Bal took the floor to admit that he was “very, very excited” when he was surrounded by his own: “I see that your eyes are shining, I have my heart like when I go out for a run or play the drums”, he has revealed the candidate, who has been defined as “a neighborhood boy who has worked and feels Madrid here, “he said, touching his heart. Bal thanked the two party leaders for their support. “I’m not going to change,” he promised. “I will always be one of yours, with Inés,” he said to clear up doubts in the face of the avalanche of leaders who have left Citizens for the PP. In case there were doubts, he asked the audience: “Does anyone see me in the PP covering and denying corruption, or in the PSOE doing the ball to Sánchez?” “I only have some principles and I offer them to you, they are those of Ciudadanos. I’m here because I’m sorry, I’m from Ciudadanos,” he settled.

The candidate believes that with his landing in the Madrid race he can break the absolute majority that Isabel Díaz Ayuso is trying to achieve. And there he has attacked the party with which they have been ruling in coalition in Madrid until a few weeks ago, remembering their corruption, although without doing much blood. “I have always fought against the corruption of the PP and the Pujol”, claimed Bal, who stressed that he has always defended that this money was for “dependency” and other social items “and not for shrimp and pocket money. of others”.

He has also denied that extremism can divide Madrid. “Here in Madrid there are no facades or reds, there are only good people,” he added, rejecting that in the capital parties such as “Podemos, Más Podemos – in reference to Más Madrid – or Vox” promote the politics “of the trenches.” The event ended with applause from the attendees and with the three leaders of Ciudadanos on stage, already wearing a mask, highlighting the candidate with the flag of Spain.