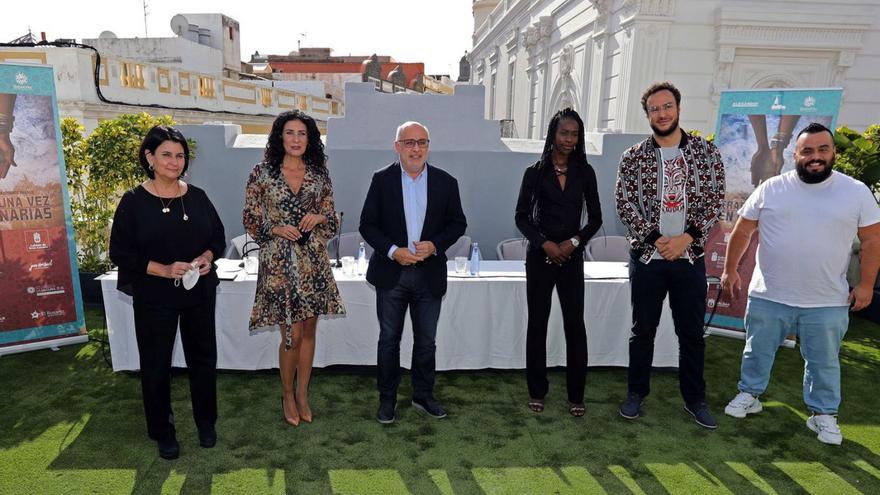 The filmmaker stressed that what makes this film original is that it will be made with a vision of immigration that will depart from the Islands themselves in a story about a young Senegalese who dreams since she was a child of going to the Canary Islands and finding her father, a fisherman from Gran Canaria whom he never met. When embarking on a canoe and reaching the shores of the Archipelago, he begins a journey in search of his origins that will turn his life around. For Ravelo in the film “the reality of African migration and the history of the Canary Islands intermingle to make the viewer reflect and surprise” and he hopes that the film will be an “antidote to hatred, xenophobia and racism” since it wants to reflect the wide spectrum of reasons that lead to emigrate and, at the same time, present different aspects of Canarian society.

For this reason, the scenes will be shot in settings such as the Cueva Pintada in the Gran Canaria municipality of Gáldar, the towns of El Rosario and La Laguna, in Tenerife, and possibly the city of Las Palmas de Gran Canaria. he found and lived together, “said Ravelo, but” it takes my sleep to know that two thousand people have died on our coasts during this year and we must give them dignity. ” The director also underlined that the cinema is the strongest tool to communicate and recalled that the trajectory of the Bentejuí Project has always been about episodes in the History of the Canary Islands, especially in 30-minute pills such as Ansite, Mah or La Cueva de women and, recently, with the feature film La piel del volcano, which obtained “a number of spectators that we did not expect and motivated us to continue making films in the Canary Islands.” For this reason, “the logical step for me was to continue counting ourselves as a people and try to focus on something that I think is having a hard time seeing clearly how this problem is.” Actress Diarra Diouf, of African origin although established in Spain, and who plays the main role of Nola, stressed that for her, working on this film “represents a huge step in the change that Afro-American actors in Spain have been fighting for. finally we can be the protagonists in the fiction of stories that happen to us, our relatives and that are not protagonists by third parties ».

Lola Perera stressed that the film brings us closer to an opaque reality and “makes it easier for us to progress as a multicultural, supportive and neighbor-loving people”, and Antonio Morales stressed the importance of supporting this film as it is “a necessary antidote to fight hate , xenophobia and racism ”. With a budget of 750,000 euros, it is sponsored by the Cabildo de Gran Canaria, which participates with 150,000 euros; from the General Directorate of Cultural Heritage, with 100,000 euros, as well as from the Presidency of the Government, which will allocate between 200,000 and 250,000 euros, as indicated by Perera, in addition to contributions from the municipalities where it will be filmed and from the Regional General Directorate of Youth .

Yanely Hernández, owner of the Fireworks production company, then stated that she is delighted with the role of Pino, a character who represents the most disadvantaged in society and for whom she has to prepare “physically and psychologically”, and above all with that Ravelo has been able to address such a sensitive issue “without falling into good humor”, predicting that “it will help to awaken some consciences”, for which he stressed that they have carried out an intense preparation work to reflect both parts of the problem, both the one that is in favor and the one that is against.

Kike Pérez will play another character that Nola will meet, a country man named Manuel “with the intelligence that the earth gives”, and insisted, like Ravelo, on highlighting the pride of participating in “a story that is told from the Canary Islands for the world ”, from the opposite point of view to the one he usually does.