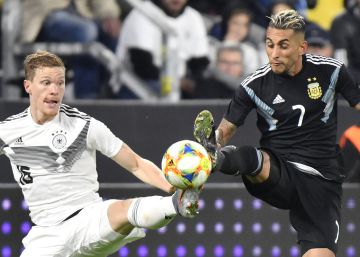 Argentina, without Leo Messi, trailed an adverse 2-0 thanks to the two goals he achieved in the second half against Germany in the friendly match played this Wednesday in Dortmund. The albiceleste achieved it despite playing without the 10, sanctioned for their protests against arbitration in the last Copa América, nor several players of Boca Juniors and River Plate, who still have to play the second leg of the Copa Libertadores semifinals .

Serge Gnabry, at 15 minutes, and Kai Havertz, at 22, scored the goals of the home team, who dominated loosely during the first act. However, Lucas Alario (66 ') who had entered the restart, and Lucas Ocampos (85'), who also started on the bench, achieved the draw goals.

At the beginning, both teams had as a priority to maintain possession of the ball and therefore avoided risk. The first danger play was for Germany when, at 13 minutes, Julian Brandt entered the area on the right after a counterattack, although goalkeeper Agustín Marchesín deflected his shot with his foot. In the next action, Gnabry received a pass from the right, avoided his score with the control and then defined with quality at 15 minutes.

Shortly after, at 22, Argentina lost the ball at the start and Germany scored 2-0 with an effective counterattack. Gnabry, author on the last day of the Champions League of a poker at Tottenham-BayernHe attended Havertz, who only had to push the ball into the net.

From there, the game resulted in a round trip and then, at the break, Lionel Scaloni modified his team and introduced two changes In the 54 ', Emre Can had a clear hand in hand against Marchesín, who avoided the goal, and at 66 ', Alario cut differences by heading a center from the left of Marcos Acuña, who was also a substitute.

Since then, Argentina pressed and was close to drawing several times. At 85 ', Alario was again decisive and attended Ocampos for the final 2-2. The scoreboard would not move and Germany, with Ter Stegen under the frame, remained at the end unsettled. Like Argentina, he also had notable absences the Mannschaft, who could not count on Real Madrid player Toni Kroos, injured. Next Sunday, the Albiceleste will face Spain's Martínez Valero in Elche, while the Germans will face Estonia in a Eurocup qualifying match.