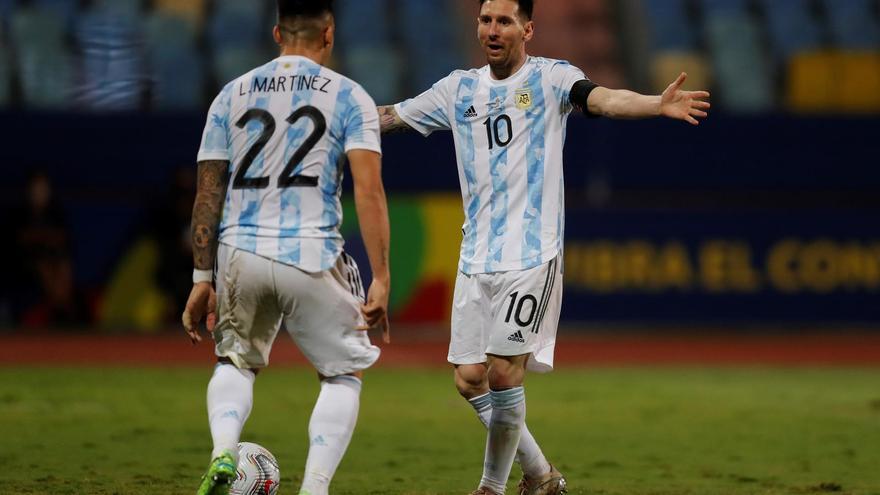 Argentina, again at the hands of an exceptional Lionel Messi, won 3-0 against Ecuador to seal their qualification to the semifinals of the Copa América, where they will face Colombia.

Rodrigo De Paul, Lautaro Martínez and Lionel Messi scored the goals of the Albiceleste for a triumph that keeps them undefeated in the tournament and with the intact illusion of achieving a continental title denied since 1993.

The match played at the Pedro Ludovico Teixeira Olympic Stadium, in Goiania, had an intense start for the Albiceleste who sought to impose their game from the beginning as in the four games of the group stage.

Lautaro Martínez became the spearhead of Argentina and in the first ten minutes he had two options to open the scoring: in the second minute the goalkeeper Hernán Galínez had a great intervention and in the 13th the defender Robert Arboleda drowned out his cry of goal to the forward of the Inter with a save with the right thing.

In the 20th minute, Germán Pezzella headed a shot that was barely deflected and confirmed Argentina’s extensive dominance in the match against an Ecuadorian team that was retreating.

In the 22nd minute, a bad delivery behind Carlos Gruezo left Lionel Messi alone against Hernán Galíndez but his cross shot hit the base of the post and again denied the opening of the scoreboard.

Big bang! Lionel Messi nailed it with a free kick for the final 3-0 of @Argentina on @LaTri

Ecuador woke up first with an appearance by Jhegson Méndez who demanded the appearance of Emiliano Martínez, who in the 35th minute had a false start in a crossed center that neither Enner Valencia nor Alan Franco could connect.

But in the 39th minute, a deep ball from Marcos Acuña demanded a departure from Galíndez to cut Nicolás González, who drifted the ball at Lionel Messi who sent a precise pass to leave Rodrigo De Paul facing an empty goal, where he defined with a crossed shot.

Before the break, Nicolás González had a double option against a Galíndez who showed off with a sensational appearance first against a header and then by blocking a shot from close range.

On the last play before halftime, Enner Valencia hit a cross on a ball that just went wide.

In the second half, Alfaro bet on the income of Gonzalo Plata and Michael Estrada to renew his hopes of leveling the score.

In minute 57 another appearance of Enner Valencia, on the attack, ended with a low shot that required the intervention of Emiliano Martínez to send the ball to the corner kick.

Five minutes later a corner kick kick ended with a shot that Nicolás González deflected and almost ended with a goal against ratifying the intensity of Ecuador in search of the tie.

In the 73rd minute, Argentina was able to get out of the siege a bit and put together a collective play that ended with a shot just deflected by Lionel Messi, who two minutes later smashed a free kick into the wall.

Ecuador did not surrender and in the 79th minute an individual play by the admitted Gonzalo Plata ended with a flush shot at the near post that again demanded another intervention from Emiliano Martínez.

But in the 84th minute came the goal that reassured the Albiceleste with pressure from Ángel Di María to Piero Hincapié for the assistance of Lionel Messi to Lautaro Martínez, who defined with a furious shot to inflate the net.

On the last play of the match, Rodrigo De Paul gave a speed rating to Ángel Di María, who was touched and moved by Piero Hincapié and although at first glance Wilton Sampaio scored a penalty then, at the request of the VAR, he signaled a free kick and sent off Ecuadorian defense.

However, from that free kick on the edge of the area, Lionel Messi placed it in the left corner of Galíndez to seal the victory of the Albiceleste and mark the fourth of his personal harvest in this Copa América.

In this way, Argentina sealed its passport to the semifinals, in which it will face Colombia next Tuesday, which in the previous match won the definition by penalties against Uruguay.

Incidents: Match corresponding to the quarterfinals of the Copa América, played at the Pedro Ludovico Teixeira Olympic Stadium in Goiania.