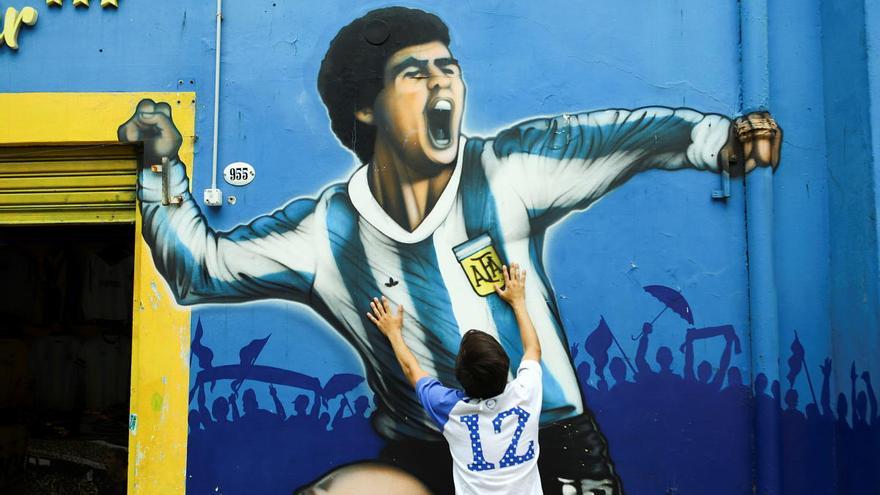 The death of Diego Armando Maradona, occurred this Wednesday at age 60, impacted in Argentina and in the world and leaves orphans the millions of people who admired the sports career of the considered by many to be the best soccer player on the planet.

The Argentine President, Alberto Fernández, declared three days of mourning In memory of someone who was already a legend in life and now, with his death, he revives the memories of glory that he wrote with his boots in the great history of Argentine sports.

At noon this Wednesday, in an Argentina going through the economic crisis and pandemic, the news of Maradona’s death shook the media and social networks like an earthquake.

“Maradona died.” Like a tsunami, the owner went around the world in minutes, a world that even today, more than three decades after his peak as an athlete, continues to recognize him, almost without exception, as the greatest footballer of all time.

Even the brazilian Pelé, almost the only one who disputes that title with Maradona, recognized him as a world “legend” and expressed his wish that one day they could play together “in heaven.”

Too Messi, the best footballer in activity, expressed his sadness for the death of Maradona: “He leaves us but he does not leave, because Diego is eternal.”

The reactions of footballers and clubs from all over the world have been joined by those of great stars from other sports, as well as entertainment and political figures in memory of an “icon” of Argentine popular culture that has transcended, by far, the merely sports.

“You took us to the top of the world. You made us immensely happy. You were the greatest of all. Thank you for having existed, Diego. We are going to miss you all your life,” wrote President Alberto Fernández, who also published a photo on the one who is seen hugging Maradona, whose professional career began in Argentinos Juniors, the “love club” of the head of state.

Maradona, world champion with Argentina in Mexico 1986, died this Wednesday, at age 60, in a house in a private urbanization on the northern outskirts of Buenos Aires.

The person who worked as a technician for Gimnasia y Esgrima La Plata had moved to that house on the 11th after having received medical discharge after several days in two health centers, first due to anemia, dehydration and a “low mood “and then for a subdural hematoma for which he was operated.

Maradona had also suffered in recent weeks “some episodes of confusion” that doctors associated with “a withdrawal picture.”

The former athlete was for many years under treatment for drug addictionEven in Cuba, where he befriended Fidel Castro, who died, by coincidence, on a day like today, exactly four years ago.

Local media attributed the death to cardiac arrest and reported that Maradona received emergency medical assistance at his home, where John Broyad, the attorney general of the Buenos Aires town of San Isidro, went.

The prosecutor said at a press conference that the death of Maradona “has nothing but natural characteristics“and that on his body, which had already been transferred to a morgue to undergo an autopsy,” no signs of criminality or “violence” were noted.

While Argentina tries to get out of the consternation, the followers of the deceased star gathered on Wednesday afternoon at the foot of the emblematic Obelisk of the capital to pay homage to their idol there.

They also did it at the gates of various football stadiums, such as the Argentinos Juniors court, in the Buenos Aires neighborhood of La Paternal, or in La Bombonera, the Boca Juniors stadium, the club where Maradona played and of which he was a fan.

Meanwhile, Alberto Fernández announced that the wake will be held from Thursday at the Casa Rosada, headquarters of the Executive.

Even Pope Francis has remembered “with affection” and “in prayer” his compatriot, according to the spokesman of the Holy See, Matteo Bruni.

And it is that there is no Argentine who this Wednesday does not remember the exploits of ‘El 10’ and that does not miss a tear recalling the mythical goal to the English in Mexico’86, that “cosmic kite” that this Wednesday he flew back into eternity.

Reactions to Maradona’s death followed each other around the world on Wednesday.

Edson Arantes do Nascimento’s reaction, Pelé, was full of nostalgia and sadness stating that “one day he hopes to be able to play soccer in heaven with his ‘friend’ Diego Armando Maradona.” “What sad news. I lost a great friend and the world lost a legend,” he said on social networks and finished by saying that “There is still much to be said, but for now, may God give strength to his relatives. One day I hope that we can play with the ball together in the sky. ”

Likewise, Lionel Messi described this Wednesday as “a very sad day for all Argentines and for football”, in an image shared on Instagram, in which they can be seen together. “He leaves us but he does not leave, because Diego is eternal. I keep all the beautiful moments lived with him and I wanted to take the opportunity to send my condolences to all his family and friends. RIP .